The Brunners of Schifferstadt 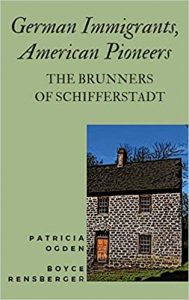 The saga of one desperate German family’s search for a better life in America, will be featured in the next lecture to be presented by the Lovettsville Historical Society on March 8. After years of likely indentured servitude in Pennsylvania, the Brunners moved to Frederick County, Maryland and rose to a level of affluence.

The story of the Brunner family provides a window onto the great German migration that gave rise to the single largest group of Americans by national origin. Many of the Germans who came to Pennsylvania in the early 18th century moved on to western Maryland and into Virginia’s Shenandoah Valley, with some stopping in northern Loudoun County, in what became known as “The German Settlement,” now the Lovettsville area.

The story of that migration is told in the book German Immigrants, American Pioneers: The Brunners of Schifferstadt, by Patricia Ogden and Boyce Rensberger. The book begins as follows:

A surprisingly complete story of the founding and settlement of Frederick County, Maryland, can be told through the pioneering Brunner family and their Maryland house, which they called Schifferstadt after their home town in the old country. We know many details of the story’s beginning in the 1700s as the Brunners prepared to escape their ravaged German homeland. And in the 21st century we have the evidence of how they lived in Maryland—the stone house that stands today as an architectural museum in the City of Frederick…. In 2017, the U.S. Department of the Interior awarded it the elite designation as a National Historic Landmark, only the second site to be so honored in Frederick County.

Ogden and Rensberger have tried to tell as much of the overall story as can be documented by historical records about the Brunner family and about the times in which they lived. They have relied upon the work of historians and of contemporaneous observers who left accounts of what they saw. And they have combed through government and church records of the Pennsylvania and Maryland colonies, which have yielded valuable information on the family and their lives and times.

Among topics which will be covered:

Patricia Ogden, a local historian, has devoted several years to digging up key facts from government and church records in Maryland and Pennsylvania. She is retired from the financial sector and lives in Frederick. Boyce Resnberger is a retired journalist with The Washington Post and The New York Times. He is a Brunner descendant who lived in six states before settling in Frederick and discovering that he had come home.

The authors will have a limited number of copies of their book for purchase for $19.95; only cash will be accepted.

The presentation will be held at St. James United Church of Christ, at 10 East Broad Way in Lovettsville (formerly the German Reformed Church, thought to have been founded in the early 1730s by the earliest German settlers in Loudoun County).

The mission of the Lovettsville Historical Society is to foster a sense of place and community by preserving, protecting, and educating about the history and heritage of Lovettsville and the German Settlement. The Society is a tax-exempt 501(c)(3) organization under the Internal Revenue Code. Contributions and membership dues are tax deductible under Internal Revenue Code Section 170.