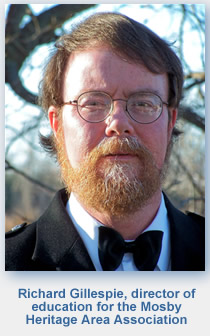 The Sixth in a Series of Local Civil War Glimpses
Presented by Richard Gillespie
Sunday, February 14, 2016

Richard T. Gillespie, the Executive Director of the Mosby Heritage Area Association, will once again kick off the Lovettsville Historical Society’s annual lecture series with a presentation on Civil War-related events in this area exactly 150 years ago.

By late 1865 and into 1866, Loudoun and Fauquier counties were occupied by federal troops in the wake of the Confederate defeat the previous spring. Confederate and Union soldiers from the region had largely returned home. The commercial and farm economies were in a shambles due to the fighting, burning of farms and mills by federal troops, and because of the absence of men of military age. Freedmen were suddenly free, with an air of uncertainty about their status. Rebels of significant worth were to have their property seized by the United States Treasury Department, but whether this would be fully carried out was uncertain.
It was a time of Northern missionaries coming south to assist the newly-freed in building schools, and a time when freedmen themselves built their first churches. For the returning veterans, there were many decisions to be made, careers to be mended or begun, and loves to be wooed. And there was the overwhelming bitterness to drive behavior, and to be dealt with. Where would Northern Virginia head in the wake of the devastating Civil War? How would the participants mesh?
This 1866 program will use area historic sites and landscapes to weave a tapestry of civilian and soldier experience during the months following the South’s ill-fated bid for independence. Richly illustrated with photo and anecdote, this glimpse of 1866 explores our region and the impact its events had on soldiers, civilians, and freedmen.
“A special aspect of the Lovettsville Historical Society lectures is the interesting questions that come from the audience, because some of the members can trace their roots in the Lovettsville area back more than 200 years,” Mr. Gillespie stated. “ Attendees learn as much from the questions, answers, and audience comments, as from the lecture!” Gillespie came to the Mosby Heritage Area Association after a long career teaching history at Loudoun Valley High School in Purcellville.
The program will be held at the historic St. James United Church of Christ, 10 East Broad Way, Lovettsville, at 2:00 p.m. Admission is free, but donations will be welcome to defray expenses of the program.