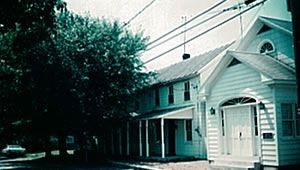 Four dwellings constructed circa 1830 that are extant, joined by commercial buildings that no longer survive, led to the first efforts to secure incorporation of Lovettsville by the Virginia General Assembly in 1836 and finally successfully in 1842, although there is no record of any formal government structure being put in place until re-incorporation in 1876. Joseph Martin‘s Gazetteer, published in 1835, described Lovettsville as a ―bustling residential and commercial Post office village,‖ not surprising for a town located on one of the main routes crossing the river to Maryland from Virginia.16  (Section 8, page 50)

Because of the unusually large number of cemeteries in the immediate Lovettsville area, it is not surprising that it was also the center of buildings and sites associated with burial and funeral practices. The Loudoun Funeral Chapel [255-5001-0027] stands at 36 East Broad Way. Although historically the site always housed operations associated with the funeral industry, the existing building was not constructed until 1940. A dwelling on the property dates to circa 1900 was likely the residence of J. W. Goodhart. The entire parcel was owned in years following the Civil War by J. W. Goodhart, a cabinetmaker. Cabinetmakers also manufactured coffins and provided undertaking services. Business files and newspaper advertisements from the 1870s confirm that J. W. Goodhart and Son in 1873 did just that. Goodhart‘s name appears prominently on the 1876 map of the town as owner of a large eight- acre parcel at the corner of Locust Street and Pennsylvania Avenue (just outside the district boundary) as well as a lot at Locust and East Broad Way. Another funeral-associated activity was the cutting of stones for the many cemeteries. Adjacent to the district and in the same area as Goodhart‘s properties was the property of W. G. Biser Marble and Granite Works, certainly an operation whose work appears in the numerous local cemeteries. A notice in the Brunswick (formerly Berlin) Maryland Herald stated in 1892, ―Mr. W. G. Biser, enterprising proprietor of the Lovettsville Marble Yard, has recently taken an order for monument of Richmond granite from Mrs. E. R. Purcell of Leesburg.‖ It appears that Lovettsville was a center for provision of both funeral services and gravestones for the area.46  (Section 8, pages 57-58).

This page is under construction.  Check back soon for historical information about the Brown Funeral Home, and the Goodhart furniture-making business which preceded it at this location.