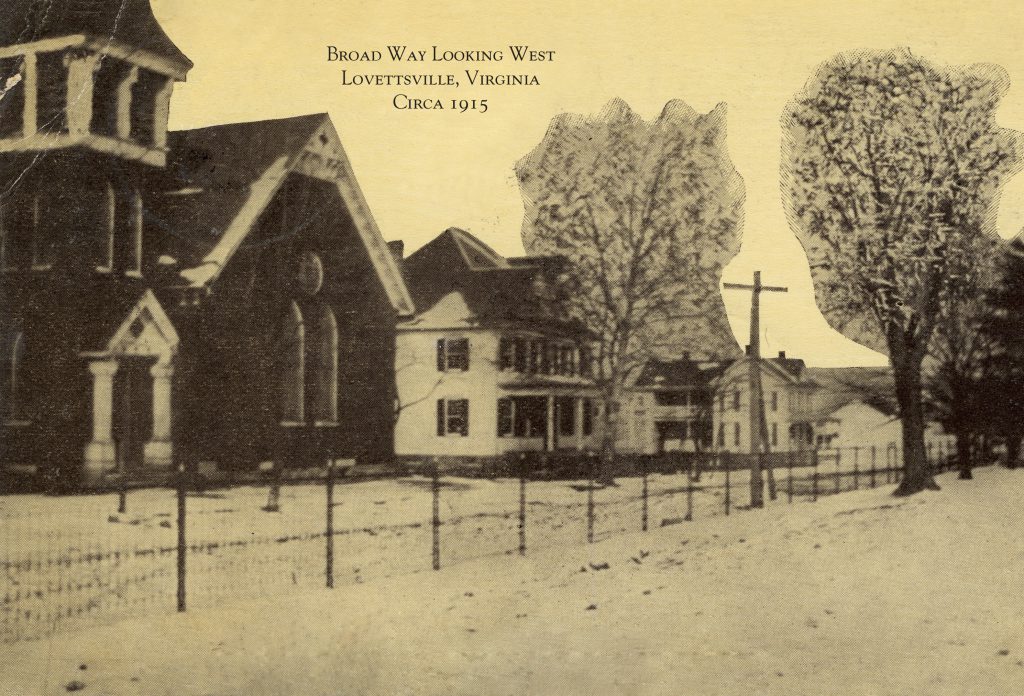 The St. James United Church of Christ [255-5004; 255-5001-0015] is the only contributing 20th-century church in the district and also an outstanding example of Gothic Revival-style ecclesiastical architecture. Constructed in 1901, the brick church features a front-gabled roof, a prominent corner bell tower and entry, single and paired pointed-arched, stained-glass windows, round windows with quatrefoil tracery at the front and rear gable ends, brick walls laid in six-course American bond, a stone foundation, a cornerstone with the name and date of the building, and projecting polygonal canted bays on both east and west sides. The three-story, corner bell tower contains the main entrance on the first floor and a second brick story. The third floor contains a louvered belfry with consoles and a wooden frieze with decorative panels. The helm roof contains small gabled dormers with quatrefoil cutouts and is topped by an elaborate finial. The one-bay pedimented porch located on the tower is supported by large wooden posts with cushion capitals that are carved and topped by a modified leaf-and-dart band. A one-story, side wing attached by a covered breezeway was added to the northwest of the church in 1963.

The oldest of the five cemeteries within the Lovettsville Historic District is the one that includes the site of the First German Reformed Church [255-5001-0070] and is located on the northeast edge of town, just outside of the official limits. A concrete wall surrounds the cemetery, except for a small portion along the southwest corner which is of stone. Gateposts with a wrought-iron gate mark the entrance with a marble plaque that is inscribed with ―St. James Reformed 1700-1947.‖ Approximately 450 burials are in this cemetery, which is still in active use. Unfortunately, inscriptions on many of the early grave markers are illegible today. The oldest stones are located in the southwestern portion of the burial ground. The vast majority of burials are marked with tombstones of granite although some of the burial plots have tall obelisks. Several family plots exist as well as unmarked stones. According to the state highway marker TA-1, erected in 1988, this church site and cemetery is associated with ―of the oldest continuous German Reformed congregation in Virginia.‖ The original church, which was demolished when a new church along East Broad Way [255-5004; 255-5001-0015] was completed in 1901, appears to have been located in the southern end of the walled cemetery.

The First German Reformed Church Site and Cemetery [255-5001-0070] on Lovettsville Road contains a number of grave markers that may date from the last quarter of the 18th century. The earliest legibly dated gravestone associated with the Wenner family dates to 1849 for George Wenner. From its earliest years, the Wenner surname frequently appears in public records for Lovettsville. In a 1948 history of the Reformed Church in Virginia, the author Reverend J. Silor Garrison writes: ―There is a fairly well authenticated tradition that as early as 1720 a family of Wenners established themselves in Upper Loudoun, then a part of Prince William County. The head of this family was a Reformed Elder, and he became a schoolmaster…He also conducted religious services…‖4 Another source states that a Swiss missionary wrote that when visiting Frederick, Maryland, in 1747, he made a side trip to ―The German Settlement‖ where he was entertained by Elder Wenner.5 The earliest legible stone in this cemetery that has direct associations with the German Settlement in the area is 1790, with an inscription in German for a 10-year-old girl. Claims are made for the presence of a log building used for worship as early as the middle decades of the 18th century, and there is a strong likelihood that some of the early stones in the cemetery pre-date 1790, but they are no longer legible. Regardless of the disagreement about the exact date of the settling of Germans in the Lovettsville area, it can safely be presumed that by the middle decades of the 18th century the German Settlement was in place and the German Reformed congregation was its core.  (Section 8, page 48).

One landmark closely associated with Lovettsville‘s place in the Unionist struggle in Loudoun was the German Reformed Church [255-5001-0070] site and cemetery. The sanctuary was rebuilt in town in 1901 [255-5004; 255-5001-0015] at 10 East Broad Way, but the original cemetery associated with the church is still in existence at its original location. The Loudoun Rangers, the first Union military unit of Loudoun residents, had its headquarters at the church in the summer of 1862. According to Chamberlin, ―The site proved popular with the men, situated as it was among their many friends and relatives of the German settlement.‖35 Governor Pierpont wanted a unit like the Rangers to protect the Unionists in Northern Loudoun County, and many of the Rangers‘ members were raised from the Lovettsville area.  (Section 8, page 55).