By Margaret Morton,
Leesburg Today,
August 24, 2012.
Lovettsville has become the latest western Loudoun municipality to win state and national designation for its historic assets.
The National Park Service has listed the historic core of the town, two cemeteries and several churches that comprise the Lovettsville Historic District on the National Register of Historic Places.  The Lovettsville Historic District was accepted on the state register at the end of June 2012.
The district comprises the central part of old Lovettsville, including St. James United Church of Christ on Broad Way, the New Jerusalem cemetery and the old St. James cemetery.
The effort to seek the designation was spurred by a desire by both the town government and the Lovettsville Historical Society to gain state and national recognition for “The German Settlement.”  The historical society is a champion of the town ‘s heritage and runs a lecture series each year that focuses on different aspects of the town’s story.
Lovettsville originally was called The German Settlement — formed by 60 German families who came south from Pennsylvania seeking good agricultural land in the mid-18th century.  In the 1820s the community was called Newtown after David Lovett subdivided his property into quarter-acre lots.  The name was changed to Lovettsville in 1828 and the town was incorporated in 1876.
About two years ago, Town Manager Keith Markel approached the Virginia Department of Historic Resources about the possibility of gaining a grant to start the process to become listed on the state and national registers.  The town received a grant that enabled the hiring of architectural historian Maral Kalbian to compile the research needed for the nomination process.
Kalbian has considerable experience in register nominations and had previously overseen the Town of Round Hill’s historic district nomination and placement on the state and national registers.
Lovettsville was home to farmers, merchants and craftsmen, and a place where slaveholding was limited.  The town was one of only a small number of Virginia communities to strongly oppose secession before the Civil War.  The town supported the Union cause, along with nearly Waterford.  Men from both communities formed the Loudoun Independent Rangers to fight on the Union side in the conflict.
Located on a main route between Leesburg and a strategic Potomac River crossing two-and-a-half miles north of the town, according to the nomination, residents found themselves directly in the path of both forces during the war.  In addition to its ethnic heritage, the National Park Service cited Lovettsville’s rich and diverse architectural legacy in the National Register listing.
The designation is honorary and has no bearing on local land use laws.
Download the entire National Register of Historic Places document here:
255-5001_lovettsville_hd_2012_nrhp_final 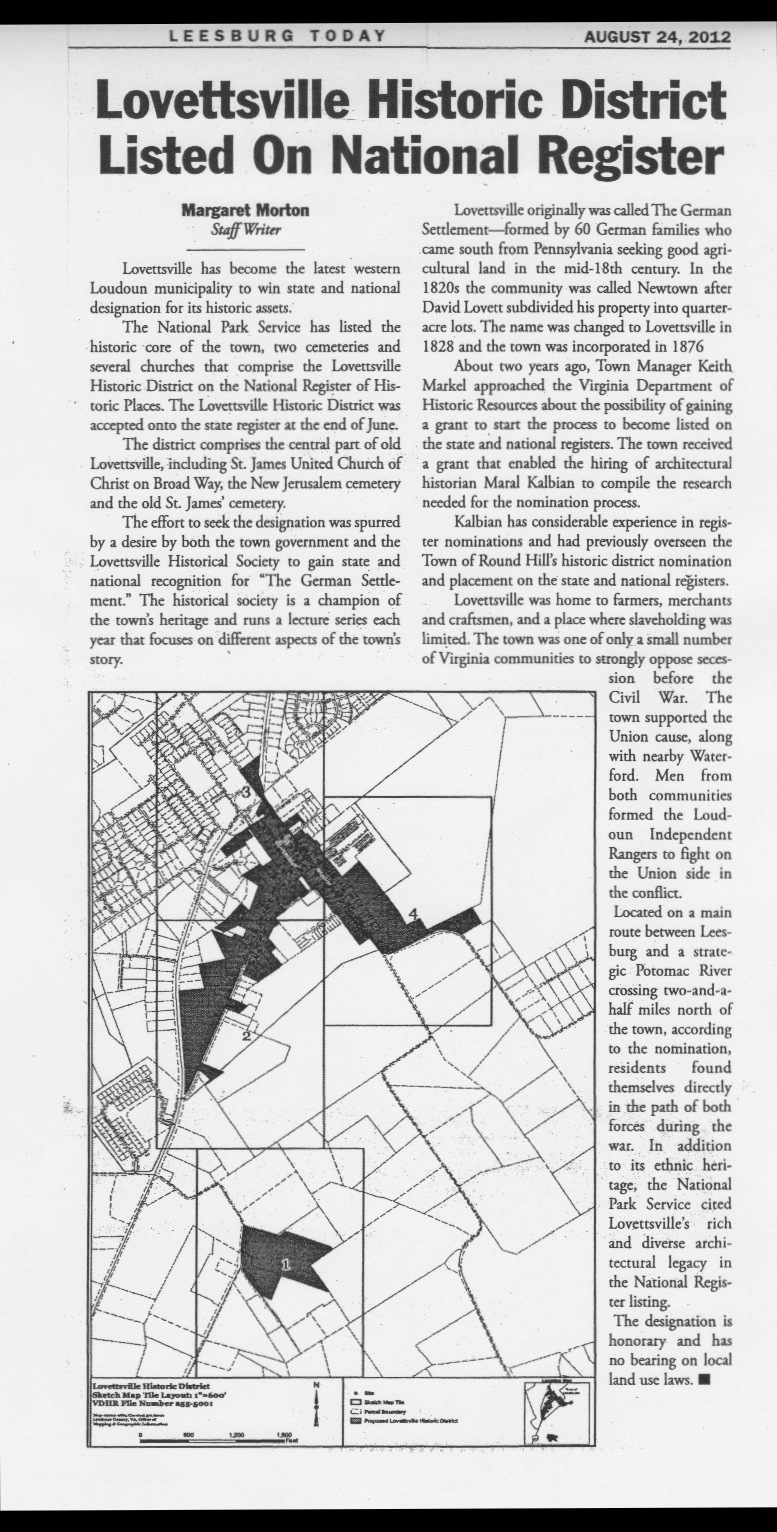