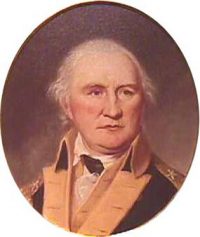 Daniel Morgan: American Rifleman –
The Life and Military Career of one of General George Washington’s Most Effective Commanders of the Revolutionary War 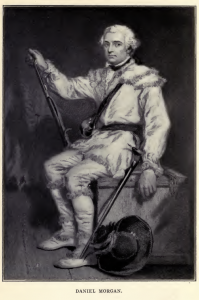 Daniel Morgan, the legendary rifleman and Revolutionary War commander, will be the subject of the August 11 presentation in the Lovettsville Historical Society’s monthly lecture series. The event will feature a PowerPoint slide presentation and talk by Randolph G. Flood, Founder of the American Revolution Consortium for Civic Education, and an instructor at the American Revolution Museum in Yorktown, Virginia.

From a Virginia perspective—and to the extent that citizens outside of Virginia know about him—Daniel Morgan was a true American hero. He was one of George Washington’s most brilliant strategists and Light Infantry commanders during America’s War for Independence –credited with winning two of the most important battles of the conflict.
Born on the border between Pennsylvania and New Jersey, Morgan moved westward to the Shenandoah Valley early in life. Settling in the Winchester—Charles Town area, he became an expert marksman with a rifle on the frontier, and was very knowledgeable about Native Americans and their style of warfare.

Developing a knack for business and trade, Morgan frequently traveled through the Leesburg-Loudoun Valley area to purchase and sell goods and commodities. Calling this region his home, Morgan always returned to the area whenever he concluded a battle or military campaign.
Mr. Flood will discuss all of this and more during his presentation, will make recommendations about several excellent books about Morgan, and will take questions afterward.

Flood grew up in Nokesville, Virginia, in southwestern Prince William county. Graduating from Shepherd College in Shepherdstown, he served on the professional staff of the United States Senate, and was heavily involved in Prince William and Loudoun County politics in the 1970’s. Today, he lives in Williamsburg, Virginia, where he does extensive historical research and lectures about the Colonial period at the American Revolution Museum at Yorktown and other locations.

The presentation will be held at St. James United Church of Christ, at 10 East Broad Way in Lovettsville. Admission is free, but donations and are welcome to defray expenses of the program. A portion of the proceeds will go to support the American Revolution Consortium for Civic Education.