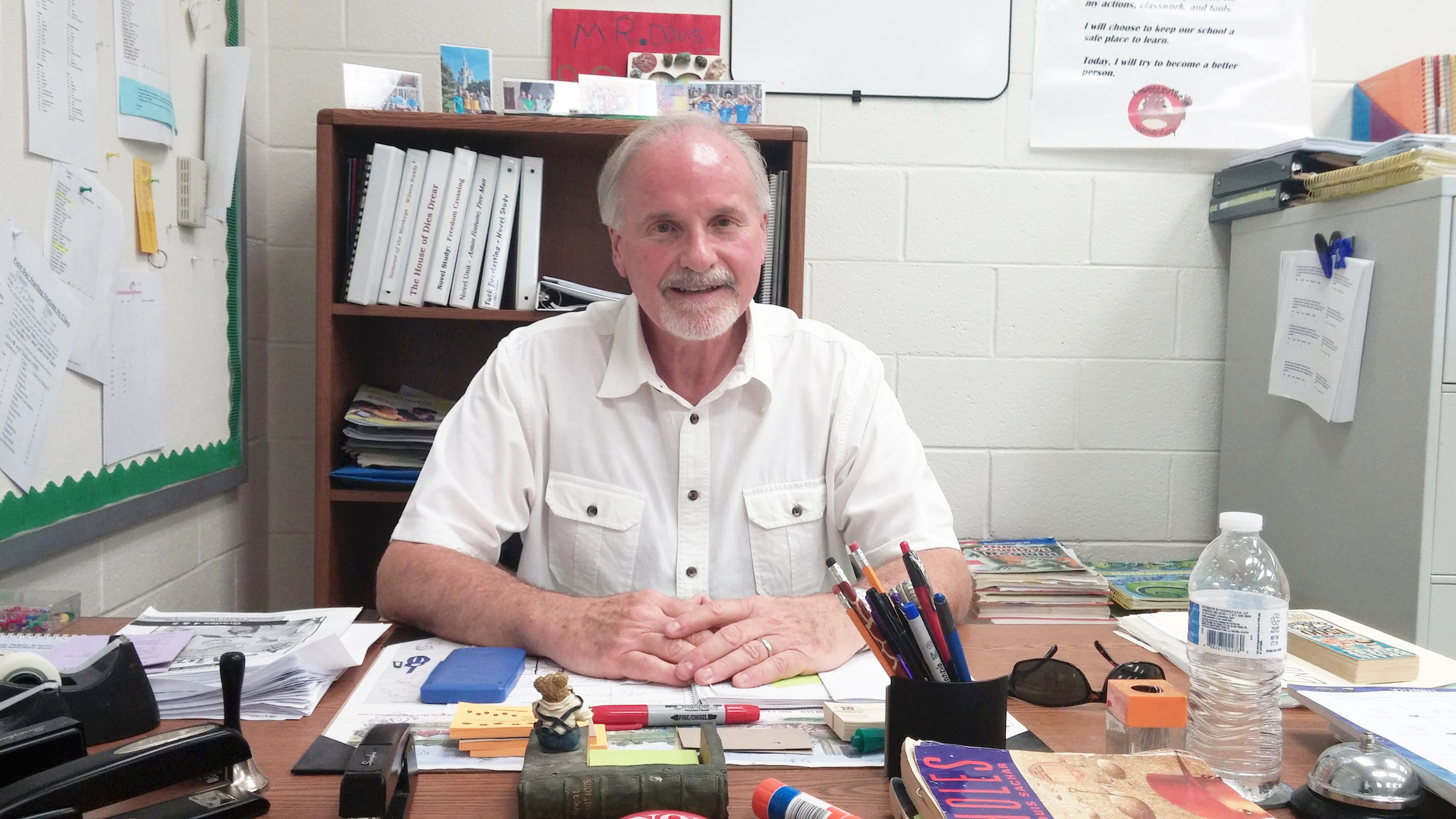 Lovettsville Elementary 5th grade teacher Edward Davis retires this month after 39 years of teaching, 21 of which were spent in Lovettsville.His last day is June 17, and his last day teaching his students is June 13. Over 200 students, former students, teachers, and parents turned out May 29 for a surprise retirement party in his honor.

“My best moments are in this community,” Davis said. “Every time I drive up Route 287 and pull into here, I just thank God that I’m at this school. I can’t imagine teaching at a better place.”

Davis, a Shepherdstown, W.Va., resident, grew up south of Pittsburgh, Pa., and has always enjoyed being in a teaching role. Even as a young teen, he coached younger boys in a recreational baseball league, because most of the men in the area were steel workers who were busy during the day.

He first moved to West Virginia in 1975 for a teaching position at Blue Ridge Elementary, right on the border of Loudoun. He began teaching at Lovettsville 26 years ago.

“When I came here, I remember going home and telling my wife, ‘There’s something special about that place,’” he said.

After teaching at Lovettsville for a few years, he worked as the first assistant principal at Ashburn Elementary for five years, before returning to Lovettsville to teach 5th grade because he missed working with kids.

“Administrators aren’t teachers,” he said. “They’re firefighters. When there’s a problem, they have to fight that fire. They don’t have a lot of interactions with kids. They do, but a lot of times it’s a negative. I didn’t like that.”

Davis wanted to feel happy and fulfilled, and he said he’s felt that while teaching at Lovettsville Elementary.

Over the years, Davis has had to adapt to changing expectations of teachers.

“You don’t just try to impart knowledge and wisdom,” he said. “Now you’re a nurse, you’re a counselor, you’re a helper. They taught us that teachers are in the place of parents when the children are there. You really are. It’s all-encompassing.”

Loudoun has grown dramatically in Davis’ years of teaching. When he first got hired, there were only about 12,000 students in the entire county. Now there are over 70,000.

Despite the growth, Lovettsville Elementary has remained a welcoming and close-knit community, Davis said, with parents and teachers that work well together.

“Every year is different, and every day is different,” he said. “That’s what I like about teaching. This has been the best place I’ve ever been in my life.”

The teachers and parents first formed a celebration committee back in December to start planning Davis’ retirement party. They sent out invitations to as many former students as they could, and made announcements at local middle and high schools. Over 200 people said they’d be there, although some current students said they couldn’t make it because of sports. However, the rain that night canceled many sports activities, and some of those students were able to make it after all.

The students and alumni left the stage to Stillman’s revised version of “So Long, Farewell.” The celebration also featured a segment in which students stood out of Davis’ sight and shared memories of their experiences, and he had to guess the student by name. During the party, Davis was presented with a memory scrapbook, filled with dozens of letters from students and former students.

The party caught him completely by surprise, and he said he was blown away.

“I’m humbled,” he said, his voice wavering a little with emotion.

Not just a teacher

His friends and colleagues spoke warmly of their years working with him. Lovettsville 4th grade teacher Stephanie Moore helped with the retirement party, and has known Davis for 18 years. She described him as being “like a dad” to her.

“He would do anything in the world for his friends,” she said. “He would give the shirt off his back for them. He is the best friend anybody could ask for.”

Moore said Davis is both a great teacher and a role model, and that he is always willing to listen and help solve problems.

“He really cares about his kids,” she said. “He teaches them not just about education, but about life.”

“He has a true love for education and children,” she said. “He is a dynamic speaker. He brings history to life. He captures your attention.”

Stillman has worked at Lovettsville Elementary for 14 years, and Davis has been there the entire time. Davis sometimes helped out with Stillman’s music projects. When she put together a country band with the students, Davis dressed up in overalls and played the washboard.

“Every year he is our Santa Claus when my kids sing at the Loudoun County Senior Citizens Holiday Lunch,” she said. “He comes in as Santa Claus and he passes out candy canes to all the senior citizens.”

“He has an incredibly strong faith,” she said. “He is very patriotic. He is very devoting to his family. And he loves teaching, and that shows.”

Hillebrand, who also helped with the retirement party, has worked with Davis for ten years, and will be moving to 5th grade next year to replace him.

Davis was on the panel to interview Hillebrand before she started at Lovettsville Elementary.

“He did not smile throughout the entire interview,” she said. “And he goes, ‘I have a final question.’ And he said, ‘What would you do if you came to your door in the morning and you found vaseline on the door handle?’”

Davis then cracked the barest hint of a smile.

“I looked at him and I giggled and I said, ‘Bring it on,’” Hillebrand said.

“I knew when you answered that question that you were meant to be at this school,” Davis replied.

That day was the beginning of years of shared practical jokes and friendship between the two teachers. When Hillebrand showed up for her first day, she found vaseline on her door handle. The two teachers also duct taped each other’s doors shut, tacked posters to the ceiling with confetti piled on the top, placed shredded paper and hole punch dots in drawers and desks, and switched around their desks so that the tops were arranged exactly the same, though the contents of all the drawers were different.

But aside from the practical jokes, Davis’ friendship has meant a lot to Hillebrand.

“Truly and honestly, if you needed anything from him, he would be there for you. It’s amazing how many students he’s touched, and how he tells them he loves them every day,” she said. “When they walk through the door, he says, ‘Try your best. I love you. I care for you.’ He’s not just a teacher. He’s a mentor, a dad to all of these kids, and they truly look up to him.”

What’s next for Davis?

Davis is going to miss working with his students, and with his colleagues, who he considers his friends, but his life isn’t going to stop after Lovettsville Elementary. His wife, Betty Davis, has been a survivor of breast cancer for nine years, and five years ago, she had a brain aneurysm. Though she recovered fully and is still teaching today, her 18 days in intensive care brought Davis into contact with a lot of the other hurting and worried friends and family members of those in the hospital. Davis remembers those emotions well.

“That first night I left from the hospital, I thought I was going to be calling the funeral home the next day,” he said.

When he retires, he’s going to approach hospital chaplains to see if he can help out by visiting hospital waiting rooms one or two days a week and sitting with and comforting family and friends of those who are receiving care.

“You know, sometimes people just need someone to sit next to them and listen to them,” he said. “Maybe they’re lonely.”

Davis also wants to learn how to cook. His wife will still be teaching for a few more years, and he wants to have meals ready when she gets back home.

“That’s how I met her,” he said. “I was a short order cook. She came by with one of her friends one day and sat behind me while I was flipping hamburgers, and I started talking to her, and one thing led to another. But flipping hamburgers and cooking are two different things.”

Davis told Lovettsville Elementary parent Beth Creighton once that he regretted never serving in the military. Creighton, who has served in the military, had the Department of Defense write up a proclamation honoring Davis’ years of service in teaching. At the retirement party, she presented him with a flag that had flown in his name over the Pentagon on Feb. 4.

“You think you haven’t served, but you have served,” Creighton told him.

“What she said just touched my heart,” Davis said. “It was something I’m never going to forget. I’m getting tears in my eyes just thinking about it.”