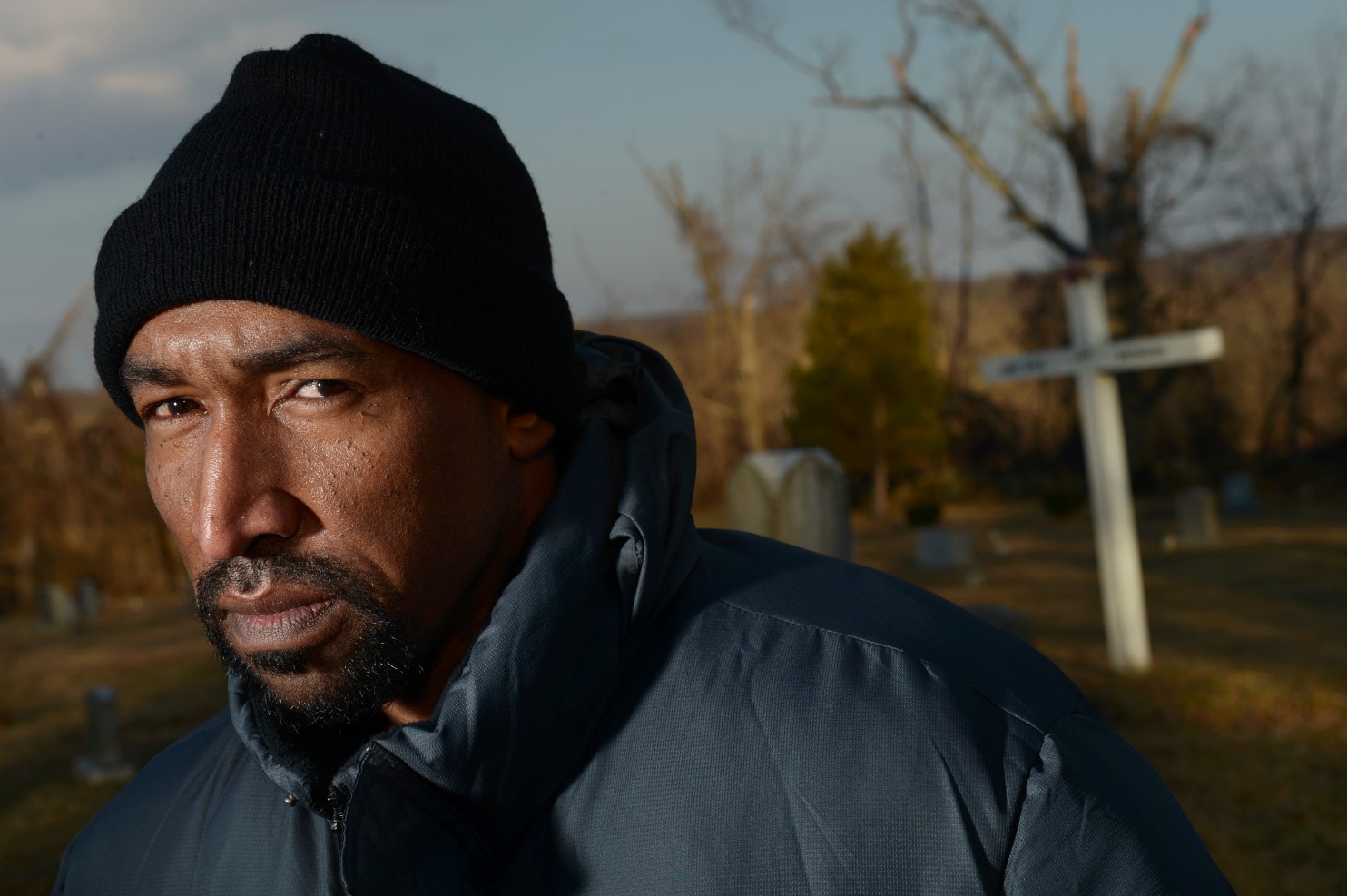 The ghost of Dennis W. Weaver, of the 1st U.S. Colored Infantry, had to reach from his Loudoun County grave to get history’s attention.

First, it latched on to Vernon Peterson, the 81-year-old caretaker at the venerable Rock Hill Cemetery. Peterson was walking past Weaver’s tombstone one day when something stopped him cold.

“It was as if it grabbed me by the leg,” he said. The name, carved in the shape of an arch. The mysterious letters underneath. “It got to me so much I had to try to find out what it meant.”

Peterson researched Weaver’s story and told it to local historian Kevin D. Grigsby. And now the old soldier from Company D and hundreds of other black men from Loudoun who fought for freedom in the Civil Warare getting their due.

Grigsby has resurrected their names and some of their stories in a book, “From Loudoun to Glory,” about the forgotten role of African Americans from the county during the war and its aftermath.

In the land of the legendary “Gray Ghost” — Confederate raider Col. John S. Mosby — Grigsby tells of the county’s intrepid black men who flocked, often from the slave cabin, to the defense of the Union.

“Yes, there was a Confederate heritage” in Loudoun, Grigsby, who lives in Leesburg, said in an interview. “But there’s also this story that’s behind the scenes of African American soldiers. People need to know the whole story.”

From rural graveyards, interviews and archives like Loudoun’s old “Register of Free Negroes,” Grigsby, 40, found the stories of men such as Weaver.

He was one of many ex-slaves and free blacks who in 1863 made their way to Roosevelt Island, then Mason’s Island, to sign up with the 1st Colored Infantry.

Weaver was about 19 that summer and was joined by other Loudoun natives or residents who signed on with the 1st — Julius Caesar, who became a sharpshooter and was wounded in battle, Abraham Mill, Claiborne Jackson and Gabriel C. Fields.

Another black Loudoun soldier was Washington Alexander, a slave who had been sold to a master in the Deep South. Newly freed, he signed up with the 49th U.S. Colored Infantry in either Louisiana or Mississippi in 1863.

He was reported missing in action in 1863 after the bitter Battle of Milliken’s Bend in Louisiana, where Southern soldiers yelled that they would take no black prisoners.

“This is a regiment that was formed straight off the plantation,” Grigsby said. “Not a lot of time for training. By all accounts they should have been slaughtered, but somehow they ended up winning.”

Daniel Lacey, another county native, served in the 11th U.S. Colored Infantry. He was involved in the Fort Pillow Massacre on April 12, 1864, where black soldiers were said to have been executed by rebels who seized the fort, Grigsby wrote.

Lacey was wounded and taken prisoner but later escaped. He managed to rejoin the remnants of his regiment, but he died of his wounds on June 22, 1864.

William Gilbert, of Waterford in Loudoun County, served in the 32nd U.S. Colored Infantry. He was killed in the lopsided Union defeat at Honey Hill, S.C., on Nov. 30, 1864.

Archibald Wright, Richard Addison, Peter Johnson and probably Wilson Gant, all of the 6th U.S. Colored Infantry, were killed in action at the Battle of New Market Heights/Chaffin’s Farm on Sept. 29 and 30, 1864. The 6th was one of 14 black regiments that fought there.

The fighting southeast of Richmond was especially bloody, and 14 African Americans received the Medal of Honor for their actions in the battle.

A few county natives made it back to Loudoun after the war and, like Weaver, made a mark on the local African American community. Of the 250 or so black Loudoun soldiers Grigsby found, fewer than 20 returned.

“I don’t want to say they lived an anonymous life,” he said. “But they just kind of settled back in. There weren’t parades or statues or monuments; they came back as victors.”

“I can’t even imagine what it was like for an African American . . . to have had that moment,” Grigsby said. “In some cases, you went from a slave to a liberator . . . to a protector and then, within so many years, you begin to see that freedom slowly peeled back and you have the rise of Jim Crow.”

“So it’s no wonder that it took all these years later to kind of start discovering, wow, we had a lot of Civil War vets who were African American here,” he added. “You have to remember you are in Virginia, and that story kind of got overlooked.”

Weaver helped found and fund the cemetery where he is buried — a crucial task for blacks in the post-slavery South, where they couldn’t be buried with whites, Grigsby wrote in his book.

Weaver “understood that having a cemetery was an important part of establishing an identity for the black communities in southwestern Loudoun County,” Grigsby wrote.

“A school, cemetery, and church were three things soon established after ex-slaves founded communities of their own . . . following the end of the Civil War,” he wrote.

Other black Loudoun veterans are buried in such cemeteries.

On a recent Sunday afternoon, Grigsby and Peterson stood in the windblown cemetery where Weaver is buried. As the sun set, a tattered American flag flew overhead and tall evergreens swayed in the gusts.

For years, Peterson said, he had ignored Weaver’s modest tombstone etched with the cryptic “ CO.D 1 U.S.C.I.”

“I never paid any attention to it,” said Peterson, who said he has been the caretaker for 57 years. “At the time, I didn’t understand. I could read his name, but I couldn’t understand the other part of it.”

That began to change the day in the cemetery when Weaver’s spirit seemed to grab him.

“It almost had to be something like that,” Grigsby said.

Weaver and his wife had no children. “So there was no one left to take care of their graves, no one to tell their story,” he said. “So if it wasn’t for Vernon, their story would have been forgotten.”