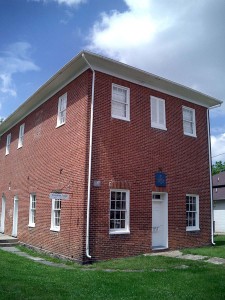 LHS Free Lecture Series: “Freedom Lodge and the Birth of Freemasonry in Lovettsville” (2016)

The birth of Freemasonry in Lovettsville took place 150 years ago – just months after the end of the Civil War – when the Grand Lodge, Ancient, Free, & Accepted Masons, of Virginia, at the request of ten Master Masons, issued a dispensation on September 22, 1865 for a Masonic Lodge to be formed in Lovettsville. The new lodge was given the designation of “Freedom Lodge.”

“It seems extraordinary that there would be enough men who would be interested and solvent enough to form a Lodge, at a time when this area was still in disarray after the conflict,” says McGarrah. Many of the names of the charter members will be familiar to anyone who has looked at history of Lovettsville and the surrounding area. Just who were these men? What was their role in the community, and their influence on it? What were they doing during the Civil War?

This talk will explore who these men were, the building of the Masonic Hall in Lovettsville, and the ups and downs of Freedom Lodge 199, until it closed in 1890. It was re-opened in 1892 as Freedom Lodge 118, which now describes itself as “the Southern least Lodge in the Commonwealth of Virginia.”