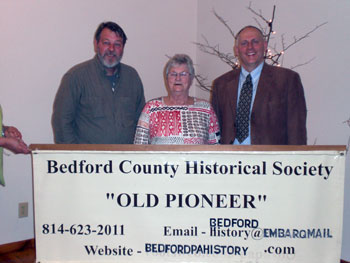 Next in the Lovettsville Historical Society Lecture Series: From Loudoun to Bedford

The story of dozens of families who migrated from The German Settlement
in Loudoun County, to Bedford County, Pennsylvania, will be featured at the
next event in the Lovettsville Historical Society’s Lecture Series. It will
be held on Sunday, August 11, at the historic St. James United Church of
Christ in Lovettsville.

In the years following the Revolutionary War, many German-American
families, who had settled in The German Settlement, around what is now
Lovettsville, moved to Bedford County. Why did they leave this area for
central Pennsylvania? Was it for economic reasons, the difficulty if not
impossibility of purchasing land in northwest Loudoun County, which was
still held in large tracts derived from the Fairfax land grant? Was it for
social reasons, of opposition to slavery? Was it for political reasons, that
German-Americans could wield far more influence in Pennsylvania than in
Virginia?

Gillian Leach, the Executive Director of the Bedford County Historical
Society, and Col. David Koontz, a descendant of a number of the families who
left The German Settlement for Bedford County in the 1790s, will attempt to
answer some of these questions, as the featured speakers on August 11.

Leach and Koontz will be backed up by Tom Bullock, President of the
Lovettsville Historical Society, who will present maps and graphs, showing
the results of his research into where these families lived, and some
surprising information about slave ownership among German-Americans in
Loudoun County.