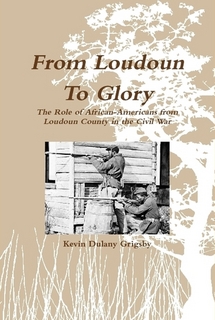 LHS Free Lecture Series: “From Loudoun to Glory: The Role of African-Americans from Loudoun County in the Civil War” – Purcellville Gazette (2013)

The unknown story of the approximately 250 African-American soldiers from Loudoun County who served in the Union Army during the Civil War has been discovered by local historian Kevin D. Grigsby, and will be featured in the June 9, 2013 presentation as part of the Lovettsville Historical Society’s monthly lecture series.

Mr. Grigsby is a native of Loudoun County, whose family roots go back to the earlly 1800s. His first book, published in 2008, was “Howardsville: the Journey of an African-American Community in Loudoun County, Virginia.”

In his new book “From Loudoun to Glory,” Mr. Grigsby writes:

“While the Civil War is considered one of the most significant periods in American history, it is probably the most important period in the history of African-Americans. Just as American colonists took up arms against their colonial ruler Great Britain in the Revolutionary War, African-Americans took up arms against those who enslaved their people for nearly 250 years. As a result, they helped end slavery and helped liberate millions of their enslaved people. The participation of black soldiers and sailors in the Civil War provided African-Americans with the sense of revolutionary victory that white American colonists felt with their defeat of England.”