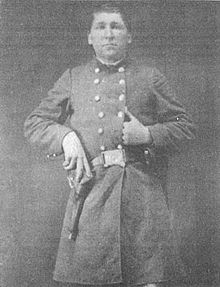 The 2 p.m. lecture on Mobberly’s rough and ready guerilla activities will be given by noted Civil War historian Horace Mewborn.

Little known today outside Loudoun, Mobberly in his day was widely known and feared as a ruthless Southern activist. His name cropped up in Union communications and northern newspapers in derogatory terms, citing his frequent attacks on federal troops stationed at Harpers Ferry, the lower Shenandoah Valley and the northern side of the Potomac River in Frederick County, as well as raids against residents favoring the Union side-breaking into homes and seizing anything he wanted.

Mobberly joined the Confederate army in September 1862 as a private. Within six months, Union commanders were all too acquainted with him for his constant attacks and raids on wagon trains.  Although once captured, he was released as part of a prisoner swap-and promptly returned to his old activities-“”killing and capturing pickets and stealing horses,” according to an account by Union General Benjamin Kelley, commandant at Harpers Ferry.

Mobberly’s brutal career ended in April 1865 when he was killed by seven men who ambushed him near Lovettsville. A local Union sympathizer, Luther Potterfield, was instrumental in helping Union forces choreograph Mobberly’s death.

For more information, contact Edward Spannaus at 540-822-9194 or email events@lovettsvillehistoricalsociety.org.