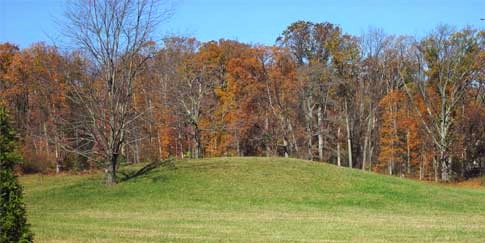 Next in the Lovettsville Historical Society’s lecture series:

“The Indian Mounds of Loudoun County and Northern Virginia Piedmont”

On Sunday, July 10, the Lovettsville Historical Society will again host historian Eugene Scheel, who will speak on the history of the Indian Mounds of Loudoun County and the Northern Virginia Piedmont.

For 150 years, the American Indian Mound on Route 15, south of Leesburg, has intrigued people interested in local culture prior to European settlement. Following an undated article that appeared in the 1880s, seven other articles have ensued, some scholarly, others in newspapers. Each gives a slightly differing story, though the crux always involves a battle between two Indian nations, with the mound memorializing the conflict and casualties.

“For many decades, I would meet with Jonny Rocca, a good friend and possibly the last surviving native American Indian in Loudoun (of the Tuscarora nation), and he would speak to my classes of teachers by the mound and at a nearby site where a myriad of arrowheads have been found. Mr. Rocca believed a battle was fought here by opposing Indian tribes.

“Shortly after I first came to the county in the 1960’s, I was told via an old-timer’s telephone that he had seen tribal members visit the mound at a time when few were around, and leave mementos honoring fighting forebears. That was precisely the story told in that initial article of centuries past.

“But the mound does not stand alone. There are others I have seen, from the upper Rappahannock River (near the village of Lakota, named for Sioux Indians who once lived there), north to near the Potomac.  Each is perfectly round and is composed of pebbly soil — quite unlike surrounding soils. Small rocks were often used by American Indians to mark sacred sites.

“A few decades back the location of the Route 15 mound determined that the present power lines from Leesburg west would follow the W&OD bicycle path. Hitherto the power lines were to veer west near the mound. Its presence altered the route.”

Historian, author, and map-maker Eugene Scheel has taught American Indian history to teachers and has written a critical bibliography of works about the American Indian in the Virginia Piedmont. He will have his American Indian map of Loudoun County available for sale for a sawbuck.

This event will held be in-person at the Lovettsville Town Council Chambers and will also be streamed online via Zoom. The Zoom link will be sent out a few days before the lecture. To request the Zoom link, please RSVP to events@LovettsvilleHistoricalSociety.org