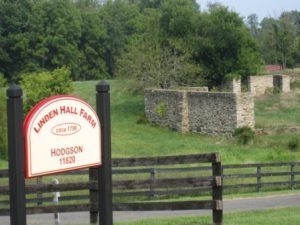 ·       Ensuring availability for agricultural, forestal, recreational, or open-space use

·       Preserving historical, architectural, or archaeological aspects of the property

·       Retaining or protecting natural or open-space values of the property

In this case, owners Bart and Carol Hodgson were focused on preserving the historical nature of the farm. Based on findings of a certified researcher, the first land record in the county for the farm was made in 1789 between an agent of Lord Fairfax and Nicholas Borders. From that point, as they say, the rest is history:

•       1793-1812: John Sager purchased the acreage. He had served in the American Revolutionary Army (Pennsylvania Brigade) from 1776-1777.  He was taken prisoner, and paroled a year later.  In 1779, again served in the Pennsylvania militia. Sager and his family moved to Lovettsville in 1779 until 1815. Sager had 10 children, and ownership passed to George Sager, who sold the property in 1812 to Elias Thrasher.

•       1812-1825: Thrasher owned “Thrasher’s Store” at the crossroads in what is now Lovettsville, and served as the Postmaster.  He owned several parcels in the Lovettsville area and was selling Linden Hall to Dr. Thomas Marlow when he died in 1823. Thrasher’s 10 children completed the sale of 300 acres in 1825.

•       1825-1853: Marlow lived on the property for almost 30 years.  He added buildings, which might have included outbuildings or additions on the south end of the house. He sold Linden Hall and 300 acres to Armistead and Lydia Filler. 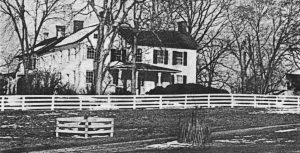 •       1853-1959: Armistead Filler may have been the most notable and documented resident of Linden Hall. He and his wife Lydia bought 300 acres, and raised cattle, making multiple trips to the Western Territories (including for their honeymoon). He was also a guano distributor, buying in bulk and selling to local farmers for fertilizer. He became the Treasurer of Loudoun County, served on the Executive Committee of the Loudoun County Conservative (Democratic) Party in 1868, and was a member of the Odd Fellows and the Democratic State Central Committee. He held interests in a marble business, silver mines, and livestock insurance. Finally, he was connected with the Baltimore and Ohio Railroad. Armistead died in 1897 and Lydia in 1905, leaving the property to their children.  In August 1959, Ruth Throckmorton (ATM Filler’s granddaughter) sold the homestead to J. Earle and Yetive Weatherly.

•       1959-1961:   Yetive authored the book, Lovettsville: The German Settlement. The Weatherly’s also owned other property in the area, and lived on a farm nearer the Potomac River. In March 1961, they sold Linden Hall to Walter (Bud) and Eve O’Brien.

•       1961-1997: The O’Brien’s assembled parcels of land totaling 65 acres. The property had deteriorated badly., and they spent nearly 20 years restoring the house, winning the Loudoun Preservation Society Merit Award in 1984. But by the mid-1990s, the upkeep became too difficult for the O’Brien’s, and they offered the farm for sale.

•       1997-present: Bart and Carol Hodgson bought the home and 35 acres. They updated the house, and maintained the outbuildings and land, adding extensive landscaping, a walk-through garden, siding and roof replacements, and the extension of the house to include a spacious modern kitchen, master bedroom suite and guest room suite.  In 2011, they established a farm stay B&B in the north attachment. Today, Linden Hall reflects their efforts to make Linden Hall a modern and comfortable home, while still preserving its historic past.

With the unbridled development of Loudoun County and the Lovettsville area, the Hodgsons wanted to preserve some the area’s history before it disappeared under housing development. In December 2020, they signed the Conservation Easement, entrusted to the Land Trust of Virginia for stewardship in perpetuity. They plan to continue living at Linden Hall, and maintaining the property to their own standards and those of the land trust. 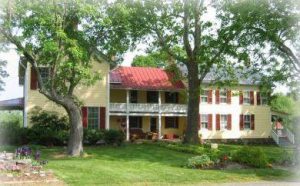