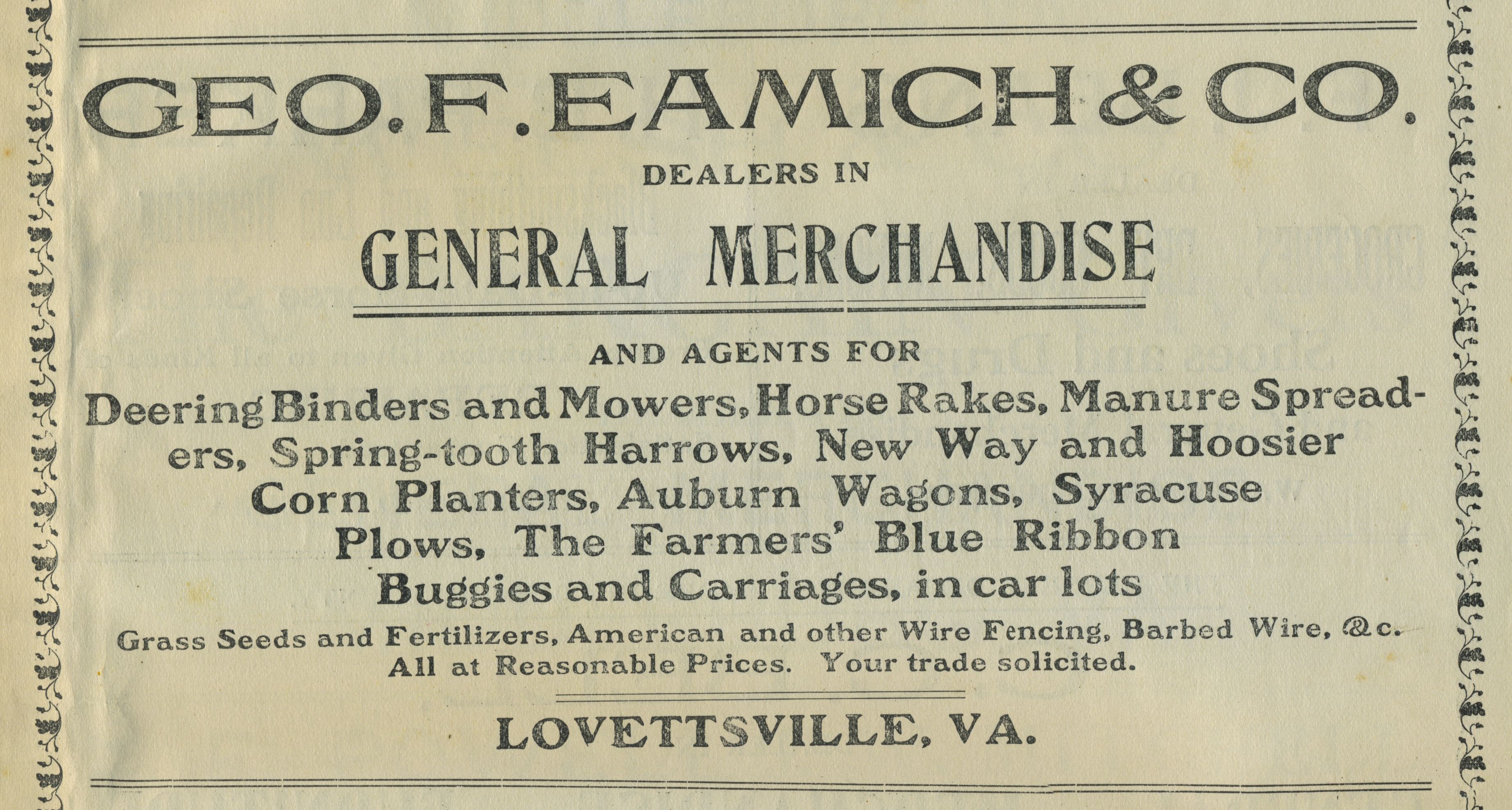 “Lovettsville: A Working Town, Or Bedroom Community?” by Edward Spannaus (2014)

Remarks delivered by Edward Spannaus at the Lovettsville Alumni Association Dinner, June 14, 2014, based on a memorandum prepared by Spannaus when he served on the Lovettsville Comprehensive Plan Advisory Committee in 2010-11.

I always have to chuckle when I hear Lovettsville described as a “bedroom community” – meaning, a place where no one goes to work, or shops, but where you just come home at night from somewhere else, where you can work and shop.

Often going with this as an ideal, is the fantasy that Lovettsville should be a pristine suburban town, in which no one works or gets their hands dirty.

Historically, nothing could be further from the truth: For most of its existence, Lovettsville was a self-sufficient, working town, dominated by business establishments which served the surrounding community. The surrounding community of course, was made up of farms – highly productive farms, in fact, which used the advance farming methods of crop rotation, use of lime, etc. that the early German settlers (and Quakers too), brought with them from southeast Pennsylvania.

Even before the town was laid out in 1820, there were one or more general stores here: Thrasher’s Store, and Douglas & Fulton’s Store, probably going back into the 1700s.

After David Lovett subdivided his property on the south side of the present East Broad Way in 1820, the first building to be erected was Metzger’s clothing store, the next was a hotel operated by Thomas Stevens — probably where Reamer’s Hotel was later located. Soon, James and William Hoey opened another store. (They also owned the property at 30 East Broad and apparently built the first house there, but the store was probably in the middle of the next block – around 14-22 East Broad.)

A “boom” was triggered by the completion of the B&O Railroad, and the C&O Canal, to Berlin (Brunswick) in 1832, which allowed farmers to ship their crops Georgetown and Alexandria, and for local merchants to obtain goods from Baltimore (and later other cities, including Chicago). As Brunswick became a major railroad center, this also provided employment many from the Lovettsville area. Maybe this was when we started to become a “bedroom community!”

This was the reason for the building of the Berlin Turnpike – today’s Route 287 – in the 1850s, so that farmers from the area around Purcellville, could gain ready access to the canal and railroad at Berlin/Brunswick. This also provided more traffic for Lovettsville merchants.

(Another sort-of reverse boom was triggered one hundred years later, with the elimination of the toll gate for the Brunswick bridge – to which the merchants and businesses of Brunswick responded by inducing Lovettsville residents to come there for shopping and entertainment, to the detriment of our local Lovettsville businesses.)

By 1835, (according to a statewide survey) there were four stores, plus two boot and shoe factories, a cabinet maker, a tailor, a saddler, and milliner, and a tavern in Lovettsville — in a town that had only 14 dwellings.

In 1836, Lovettsville was chartered as a town by the Virginia General Assembly.

Some of the businesses that we can identify in this period, before the Civil War, are:

The Civil War was not good for business, as trade across the river was curtailed and at times completely cut off. A.T.M. Filler had his political and military connections, and his cattle business, and was able to carry on trade in other goods. George Wire was a blacksmith, as was Jacob Boryer (who was arrested by Union troops for illegal trading, but never tried or convicted.)

To run a store during the war, one had to apply to Union military authorities at Harper’s Ferry. Applications were made by Peter Fry to open a retail store in Lovettsville, and also by Annie Hilleary (wife of tinsmith William Hilleary) to open a store for millinery and fancy goods. Martha (Maggie) Everhart, sister of local militia leader and Loudoun Ranger Armistead J. Everhart, had to go through a lot of red tape to open a store selling millinery goods, calico drapes, and women’s apparel. (Federal authorities were wary of allowing goods to be sold that could make their way south in the county and be of use to secessionist troops – perhaps that is why there seems to be a preponderance of permits for millinery and women’s clothing.)

Luther Potterfield at one point applied for permission to operate a still in Lovettsville.

After the war, in 1872, Charles J. Brown moved his saddle and harness shop from Waterford to Lovettsville.

“Cradle to Grave” – A common combination of lines of business was furniture maker and undertaker. In the 1850s, C.K. Hough (a well-known chair maker) and Jacob Slater took over what had been Thrasher’s store, and opened up shop as “Cabinet and Coffin Makers,” and also sold beehives. By 1878, C.K. Hough’s son Charles K. Hough seems to have taken over the business, with a little extra flair. He advertised his “furniture and undertaking” business, also advertising what he called “corpse preservers of my own invention,” plus also Egyptian embalming fluid …

By the 1870s, J.W. Goodhart was operating his own furniture and undertaking business. Goodhart advertised himself as an “old established house of the largest and cheapest stock of furniture in the county.” In 1882, he purchased a planing mill and had it shipped here from Buffalo, N.Y. Goodhart ran his business in the building whose foundation was used when the funeral home was built in around 1940 after John Brown and then his sons Wendell and Renice took over the business. (This is one of the few businesses for which can identify a continuity to the present day, from Goodhart, to the Brown family, to Loudoun Funeral Chapel which bought the Brown business. The Moore blacksmith and welding shop would be another.) Of course the Brown funeral home building is what now houses the Mad Horse Brew Pub. Such is progress!

Thomas J. Cost by 1869 had a mercantile business, advertising “Cheap Goods” (as did many merchants, advertising the cheapest goods in the county – maybe that’s part of Lovettsville’s reputation). “Come right along with your Greenbacks or produce.”

Which illustrates another point – you didn’t have to have cash to shop in Lovettsville. Well into the 20th century, merchants would take eggs or other farm produce in exchange for goods – in a sort of barter system.

In 1872, Cost & Yeakey advertised in the Washingtonian newspaper with a poem. In 1976, when it looked as if their store was to be auctioned off for benefit of creditors, they urged anyone owing them money, to come in and settle up – “a word to the wise is sufficient.” (Cost’s son and grandson later operated the store which ultimately became McClain’s.)

In 1880, when the town’s population was 92, the town contained two general stores (Eamich’s and Chinn’s), a millinery store, a jewelry shop, a clothing store, a furniture store, and two blacksmith’s shops. (Eamich’s store was at one time, the largest general store in Loudoun County.)

By the 1888-91 period, there were listed for Lovettsville: 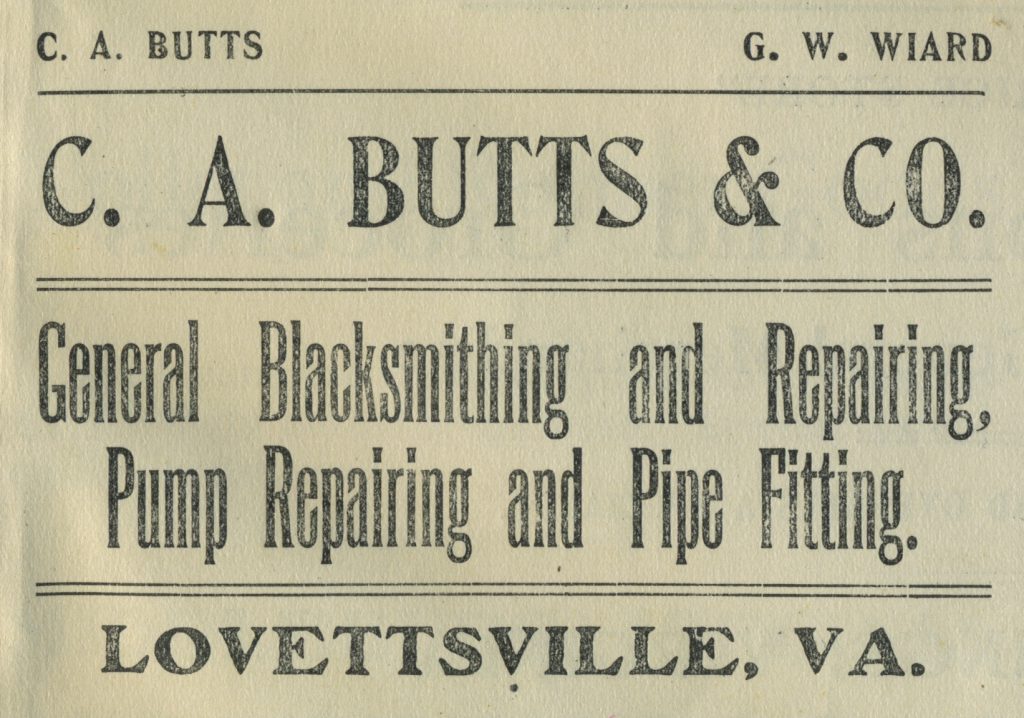 Around the turn of the century, in addition to the business establishments listed above, there were a total of four stores, three blacksmith shops, plus two fertilizer houses, a wheelwright’s shop, an undertaking parlor, two tombstone shops, a harness shop (John Swope), a livery stable (Charlie Hilleary), and Reamer’s hotel – plus a jail, five churches, and two schools.

There were two doctor’s offices, that of Dr. James Willard (Willard Hall), and of Dr. Rusmissele, succeeded by Dr. A.B. Householder, at 30 East Broad Way. Later, Dr. William Barr practiced medicine at 40 East Broad, and Dr. W. B. Carpenter, who arrived in town in 1934 and had his offices at 38 East Broad, on South Loudoun St., then at the St. James parsonage, and finally at 40 East Broad, until his death in 1975.

In the 1930s, there were five general stores in Lovettsville:

Pulitzer Prize-winning columnist Russell Baker, in his book Growing Up, describes his early childhood in Morrisonville, and he writes:

For occasional treats I was taken on the three-mile trip to Lovettsville and there had by first glimpse of urban splendors. The commercial center was Bernard Spring’s general store, a dark cavernous treasure house packed with the riches of the earth. Staring up at the shelves, I marveled at the bulging wealth of brand-new overalls, work shirts, gingham fabrics, shoe boxes, straw hats, belts, galluses, and neckties, and intoxicated myself inhaling the small of plug tobacco, chewing gum, gingersnaps, cheese, leather, and kerosene….

On North Berlin Pike (across from the present BP station), in the ‘teens and 1920s, there was a guano (fertilizer) storage house, a long metal warehouse building.

Of course the land on which the Town Square and Town Center now reside, was a working farm in the first half of the last century, owned and operated by the Hammond family, with animals usually consisting of 12 cows, three work horses, six hogs, and numerous chickens. Corn and wheat were produced, in addition to dairy products and meat.

Glenn Grove recalls driving cattle from the Brunswick railroad yard up the road to Lovettsville and through the town. A number of livestock dealers were in town, including Clayton Orrison on South Church St., and Ed Potterfield on Locust Street.

Other businesses included the Potterfield meat store and slaughter-house complex, on the site of the present Town Hall and Museum buildings. Glenn Grove has provided a vivid description of this operation, which included a slaughterhouse, a catch pen, a hide room, a scalding kettle, and a retail store (the present Museum).

There were at least two creameries: Owen Frye’s (on Pennsylvania Ave. at S. Loudoun St), and Renice Brown’s (where the funeral home parking lot now is[1]). Lester Mason also operated a creamery on S. Loudoun Street. Owen Frye had creameries at two locations prior to that cited above, both being further down Loudoun Street (across from Mason’s, and on what was later the Skaggs property).

Barber shops: Selby Brown operated one at 32 East Broad, probably starting in the mid- or late-1920s. Next was Frank Snoots in the old Post Office building at 19 East Broad[2] -– Snoots was a fiddler, and others would join him in making music. Robert LaRue operated a barber shop for a short time at 30 East Broad, where Dr. Householder had previously had his office. Leslie Baker and then Lee Williams operated a barber shop in the Masonic Hall. 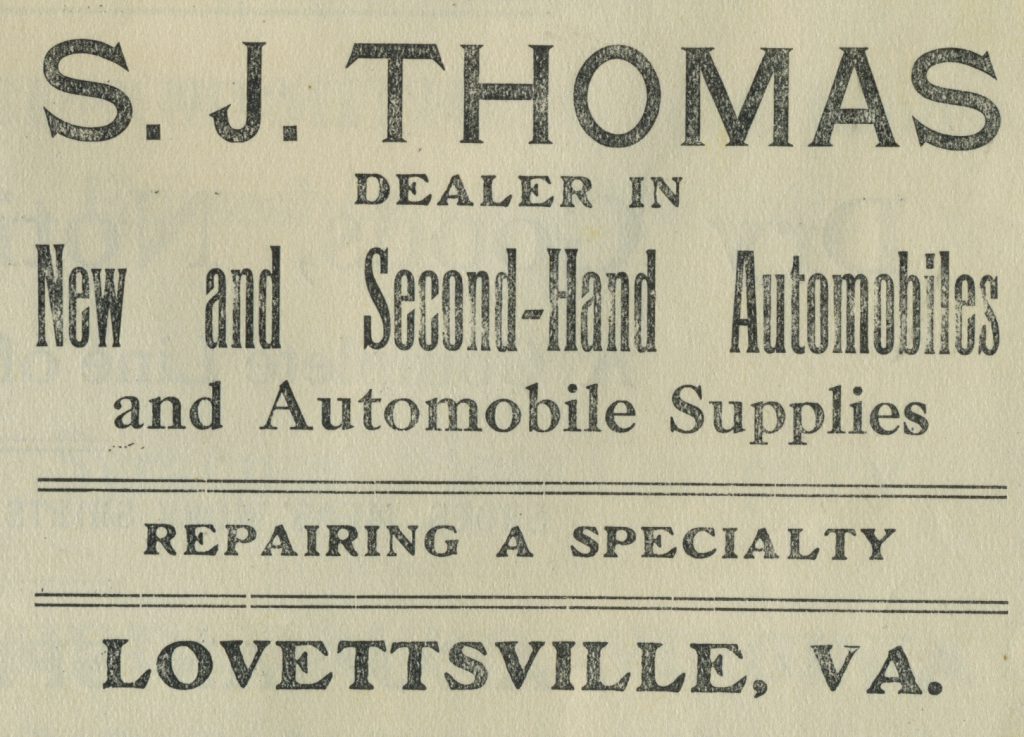 In the late ‘20s and 30s, there was only one blacksmith shop, that of Henry Nicewarner, operated in the barn on Locust Street, just above the old school and jail at the point of Locust and Loudoun Streets.[3]

Later Lee Moore opened his blacksmith and welding shop which is still extant; the building was moved from South Loudoun St., between the Biser/Graver tombstone business and the old Methodist Church. William G. Biser (Bill Moore’s grandfather) died in 1901, and Charlie Graver took over the business, moving it next door in to the building that was later moved to became the blacksmith shop.

There were at least three auto dealerships in town – representing the once “Big Three.”

Edward Myers ran a shoe repair shop and a harness shop next to his home at 27 East Broad. In the 1930s, Lewis Swope repaired shoes in a room at his house at 9 South Church, and in the 1940s Aubrey Foster had a shoe repair shop in the McClain Store building.

In the 1960s and 1970s, there was also Kreiger’s jewelry store, Lovettsville Garage, Ahalt’s and the BP service stations, and the Open View Garage, plus McClain’s and King’s general stores, Moore’s welding and blacksmith shop, Painter’s lumber yard, and Dorothy Rollins’s antique shop.

Sources used for this report include:

From Frontier to Suburbia, by Charles Poland.

“Hidden Monuments of Lovettsville Past”

“The Butcher Shop Complex – As I Knew It”

Dorothy Rickard reminiscences, including the “Walk back in time” series published in the Brunswick Citizen, on April 13, April 27, June 22, and July 27, 1995.