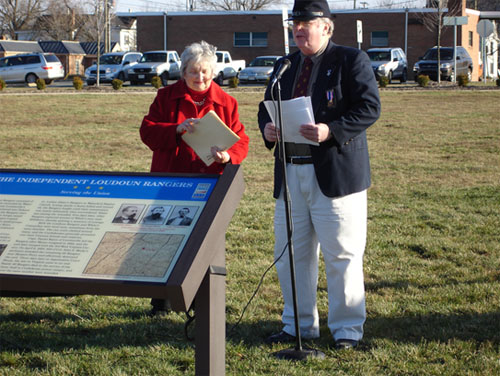 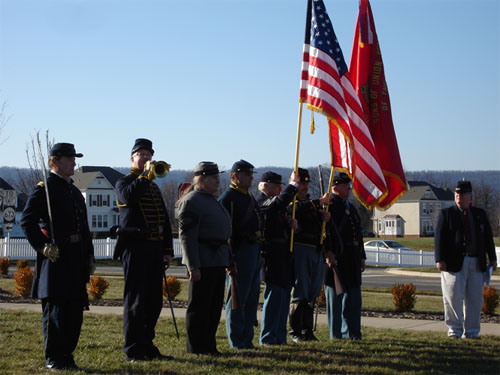 COLOR GUARD
Michael Virts of the Sons of Union Veterans commands the Color Guard to present the colors. 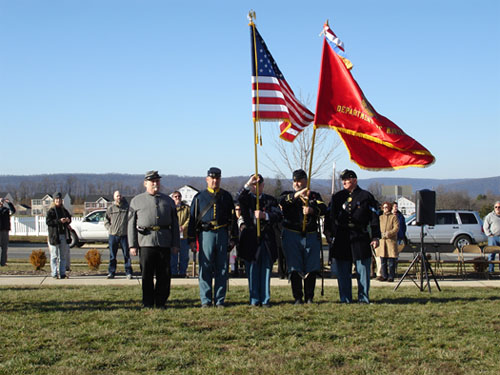 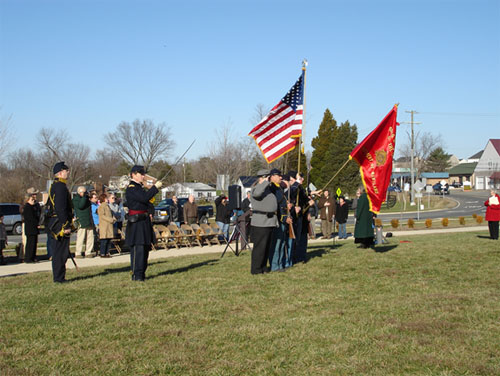 NATIONAL ANTHEM
The National Anthem is sung by all, led by Nancy Spannaus (in green coat.) 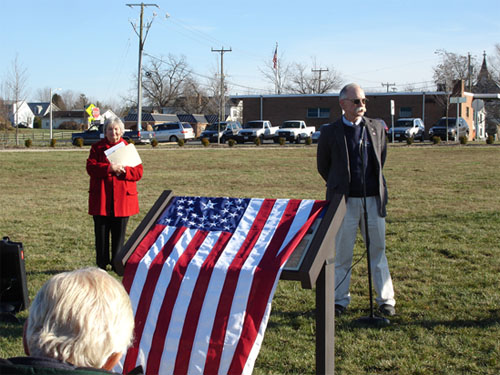 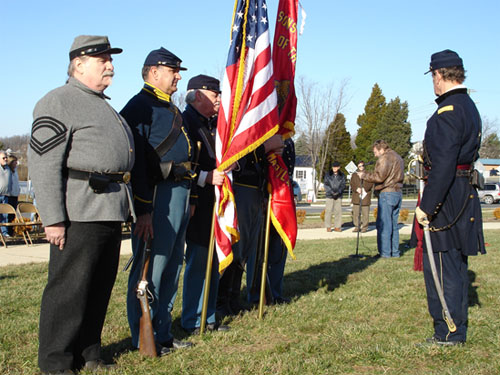 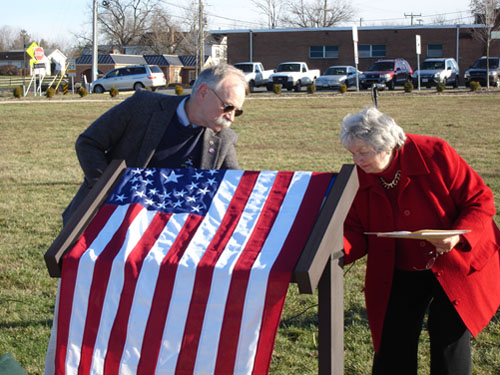 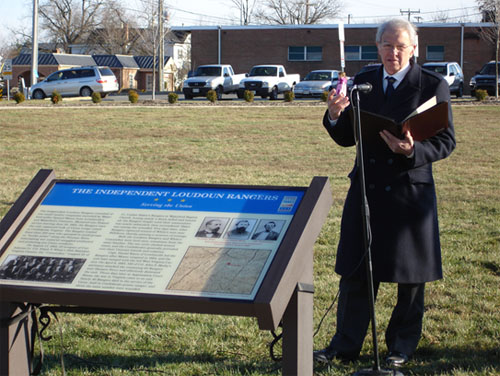 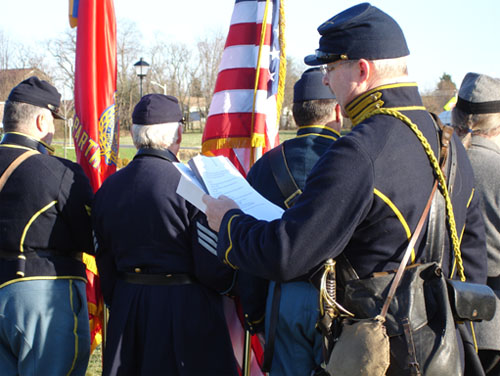 READING THE RECORD
Reading the Record of the Loudoun Rangers. 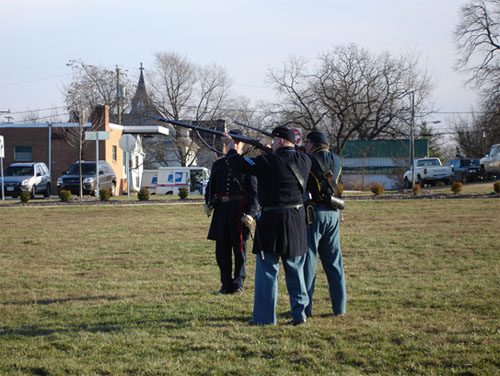 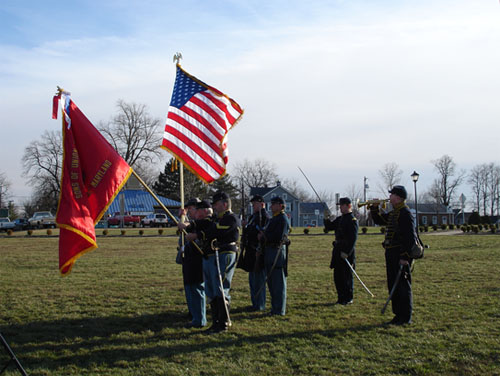 RETIRING THE COLORS
Retiring the Colors at the end of the Service of Dedication.

At the outset of the Civil War, Lovettsville and the German Settlement (as the surrounding area was known), was in a strategic location, in a prosperous valley adjoining the border between North and South. Unlike the rest of Loudoun County, the inhabitants of the Lovettsville and Waterford areas had come from Pennsylvania and Maryland, and maintained social ties to those areas. Loudoun County was at the time the most prosperous agricultural county in Virginia, and the German Settlement possessed the most productive development in Loudoun County. In addition to the advanced farming methods brought by German immigrants from Pennsylvania, this area was also not dependent upon slave labor.

Lovettsville and the surrounding area were subject to frequent raiding parties by Confederate forces, and despite their overwhelming loyalty to the Union, Union forces were unable to provide much protection, although they did make a number of raids into Loudoun County from Point of Rocks and Berlin (now Brunswick). Union Loyalists were subject to ostracism, arrest, imprisonment, and confiscation of property.

Samuel Means, a prosperous miller from Waterford, had his property confiscated; he was forced to relocate to Point of Rocks, Maryland, and then served as a guide to Union forces. In January 1862, Secretary of War Stanton, who offered him a commission and asked him to raise a command for the Union Army, summoned Means to Washington. After wrapping up his business affairs, Means set to recruiting, and by May he sent a message from Lovettsville to Col. Miles in Harpers Ferry, carried by Luther Slater, informing Miles that they were ready to go into action as soon as they got their uniforms. On June 20, Means was mustered-in at Harpers Ferry, and proceeded to Lovettsville and Waterford to muster-in Company “A” of the Independent Loudoun Rangers, the only organized military unit from present-day Virginia to fight for the United States.

Now, this assertion, as almost everything else concerning the Loudoun Rangers, is subject to dispute among historians and partisans. Particularly clouded in the fog of war, is where the first Ranger were mustered in – the Ranger’s historian Briscoe Goodhart says Lovettsville and then Waterford; the official muster rolls say Waterford on June 20, 1862 – but there is good evidence that these records were created later. It does seem clear that the Lovettsville/German Settlement area provided the majority of Company “A.” Of about 80 named by Goodhart, he lists 43 men as Lovettsville-area Germans, 18 as Waterford Quakers, and 19 Scots-Irish, including Lt. Keyes of Waterford. All officers were of those three groups, with the Germans predominating.

The primary mission of the Loudoun Rangers was to protect the loyal citizens of North Loudoun; and, because of their intimate knowledge of the area and its terrain, they were to serve as scouts and guides for Union forces.

By early July, with Company strength attained, the men elected their officers; chosen as 1st Lieutenant was Luther Slater, whose family farm was a few miles east of here, and who was a communicant at New Jerusalem Lutheran Church (which church is represented here today by Pastor Joel Guttormson).

The Rangers were not provided any military training at first, and accordingly, their lack of proficiency in tactics and drill meant that their early efforts were not crowned with success. Their first serious fight came in late August, when they were ambushed while spending the night at the Baptist Church in Waterford. Under Lt. Slater’s command, they fought until their ammunition was exhausted, and then accepted parole. A second setback came in Leesburg on Sept. 1; these reversed seriously weakened the Rangers, and delayed Capt. Mean’s efforts to recruit enough companies to form a Battalion, which was the original intention.

In October 1862, the Loudoun Rangers served as guides for the Union Army moving into Maryland before Antietam, and then guiding the Army back to winter quarters on the Rappahannock; The Rangers then set up winter quarters at Point of Rocks. (Both Generals McClellan and Burnside had temporary HQ at Lovettsville at the end of October; Burnside at the old hotel just down the street here, on Oct. 29. (About a week later, Lincoln ordered Burnside to replace McClellan as commander of the Army of the Potomac.)

Although commissioned as an independent command, subject only to orders from the Secretary of War, for most of the war the Loudoun Rangers served under other commands in the Maryland and West Virginia Departments, and conducted frequent forays into Loudoun, resulting in numerous skirmishes with Confederate raiding parties.

In the Spring of 1864, Gen. Franz Sigel, Commander of the Dept. of West Virginia, ordered the Loudoun Rangers to move to Charleston WV and be consolidated with the 3rd WV Cavalry. Means resisted the order, believing this to be a direct violation of Secretary of War Stanton’s orders – that the Rangers were recruited for special service in the north Loudoun border area – and the dispute that followed led to Means leaving the service. Stanton ultimately overrode Sigel’s order – but this, as well, is subject to controversy, and West Virginia still claims the Loudoun Rangers as theirs, to this day.

On May 30, 1865, about seven weeks after Appomattox, and about six weeks after the assassination of President Lincoln, and about ten days after the surrender of the last organized forces of the Confederacy, the remaining Loudoun Rangers were mustered out of service at Bolivar, West Virginia. They were about three weeks short of having served a full three years.

Briscoe Goodhart wrote the following concerning the Loudoun Rangers at this time: [p.199]

“They were glad the war was over; glad that the principles for which they fought had triumphed; glad that the question was settled forever—that this is a Nation and not a confederation of States; glad that the arbitrament of arms, the court of last resort, had decreed that slavery should no longer degrade American labor; glad they were part and parcel of a Nation that shall stand without a parallel on the face of the earth.”

On the 50th Anniversary Reunion of the Loudoun Rangers, held at Taylorstown on Aug 24, 1912, a contemporary newspaper account reports that the event “was largely attended, full five hundred persons included many ex-Confederates, being present.” 14 survivors of the Loudoun Rangers were in attendance.

Both Union and Confederate veterans joined in commemorating the 50th and 75th Anniversaries of the Battle of Gettysburg, proceeding in the spirit of reconciliation expressed in Lincoln’s Second Inaugural Address (“With malice toward none; with charity for all … to bind up the Nation’s wounds…”).

It is in that spirit that we undertake this dedication.

*Edward Spannaus is Secretary of the Lovettsville Historical Society, a member of Sons of Union Veterans of the Civil War, and an Associate Companion of the Military Order of the Loyal Legion of the United States. 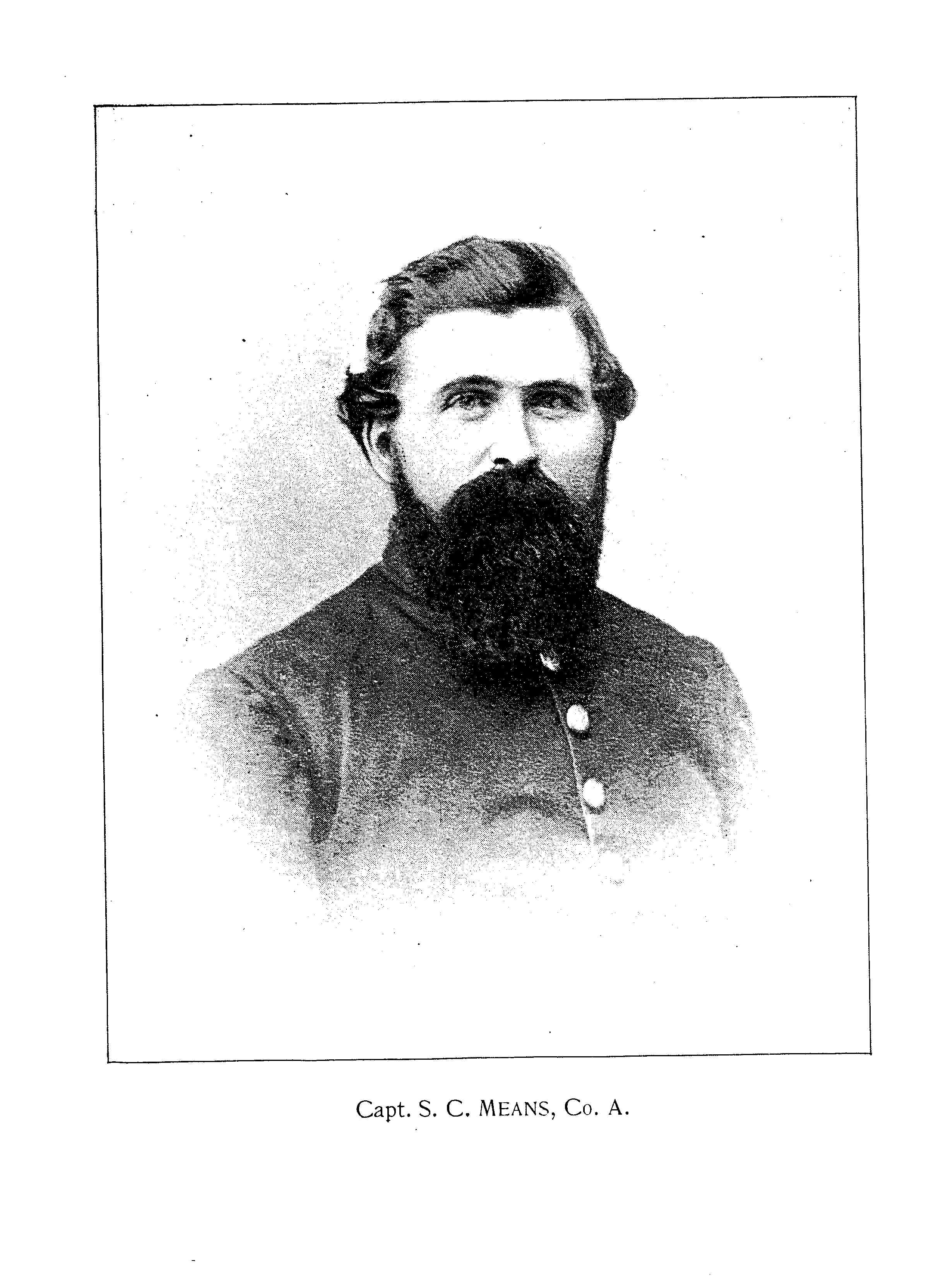