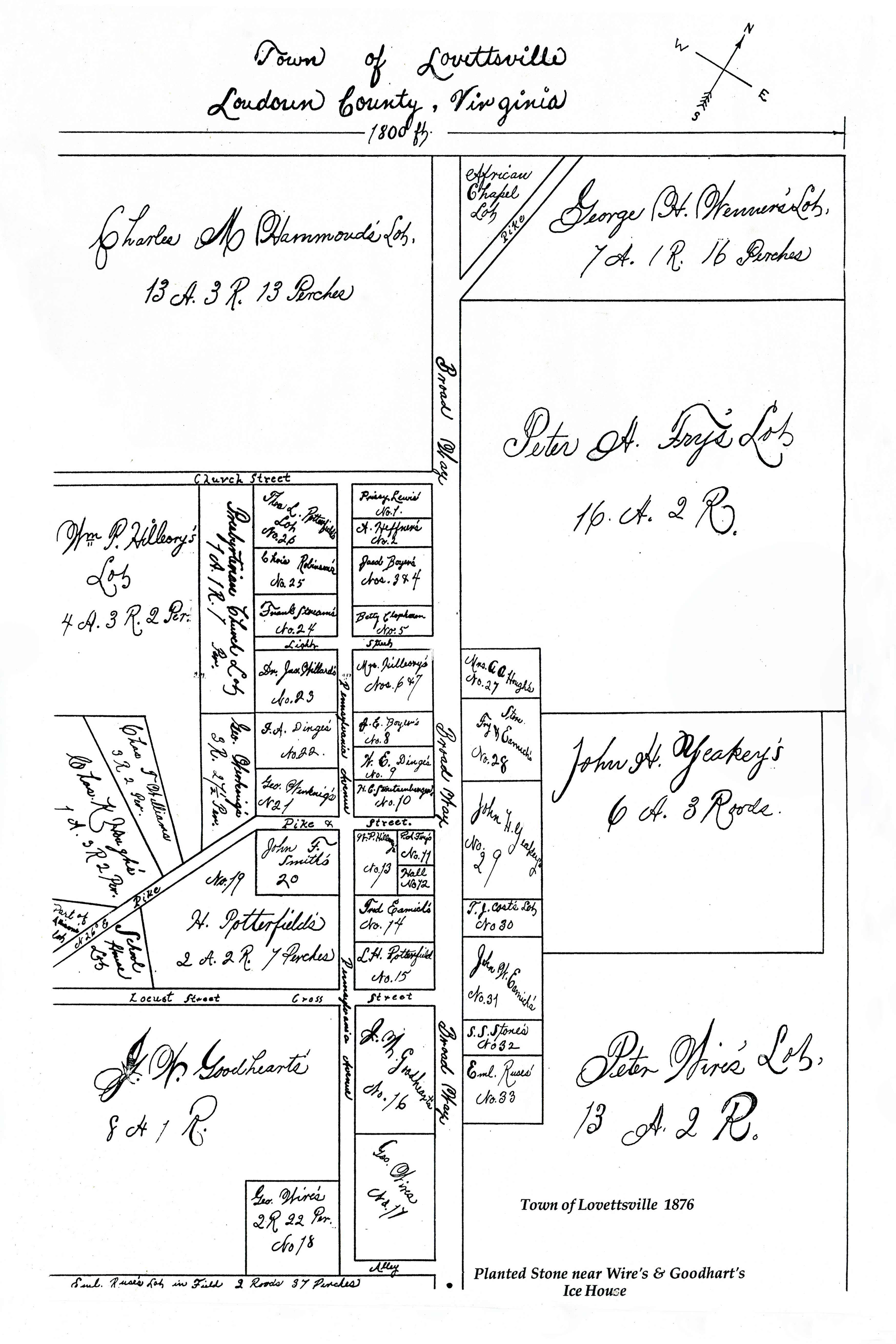 Interest in Loudoun County, Virginia history has been running high these days, especially around Lovettsville, where last week the Home Demonstration Club, in support of the Bicentennial, sold more pins, bonnets and derbies than any other chapter.

At the last meeting of the Lovettsville Home Demonstration Club, Miss Laura Potterfield gave the history of Lovettsville by special request.  So much interest was exhibited in it, that a brief account follows:
—

by Laura A. Potterfield

Lovettsville was a German settlement.  It was first called Thrashers Store.  In 1824 it was New Town.
In 1840  In 1836 the name was changed to Lovettsville after David Lovett.  A deed dated November 5, 1833 shows that he owned land here.
The town was incorporated January 14, 1842.
Then by an act of legislature, the charter was amended March 27, 1876.  We have the necessary documents so drawn up.  The town had a mayor and council of six men, a clerk and town constable.  It had zoning laws and Sunday laws, tax laws governing the speed of horses.  The population, or persons taxable within the town was 69.  The tax was five cents on $100.  Lovettsville had an ordinance that required the home owners to keep their premises clean or pay $5 to the council.

Members of the Reformed Church were meeting here in 1733.  Some records have the date 1720.  Michael Slaughter preached here in 1748.  He rode in from Middletown, Maryland on horseback.  The first Reformed Church building was in the midst of the graveyard.
Then in 1901 a new Reformed church building was erected in town.
The Presbyterian Church built in 1833 [also] stood in an old graveyard.  It was used as a Union Hospital in the Civil War.  When my father, Thomas L. Potterfield [owner of the house on Lot 26, now HousePaws Veterinary, and the meat store on Lot 25, now the site of the Lovettsville Town Hall and Lovettsville Museum], was digging a post hole, he found a skeleton that had been buried face downward.
Near the 4-H picnic grounds, there was a church first used by the Methodist.  Later it was owned by the Lutheran, then it went back to the Methodists.  In 1879, the Rev. P.H. Miller of Lutheran and the Rev. St. John Rinker of Reformed, petitioned to the council to grant protection to the churches and public worship.
Lovettsville boasted of a boarding school, run by Miss Betty Clapham, where George Groves now lives.  There was a harness shop, hotel [Lot 10], shoemaker’s shop, livery stable, drug store, tailor shop, furniture shop [Goodhart’s, Lot 16], meat store [Lot 25], theater [at Lot 11, with entrance between Lots 11 and 12], millinery store, blacksmith shop [Hammond’s lot], tin shop, jail or lockup [see School House Lot], and a bank.
Lovettsville also had two large general stores: one where Brice Wenner now lives operated by the Chinn Brothers; the other one about where Wendal Brown’s residence is and operated by George F. Eamich [Lot 28].  Customers came from out of the county and spent practically the entire day shopping.  At one time, also Peter A. Frye had a store [Lot 11].
This brings Lovettsville up to the first quarter of 1900.
——
Undated newspaper clipping from 1976; name of publication not indicated.