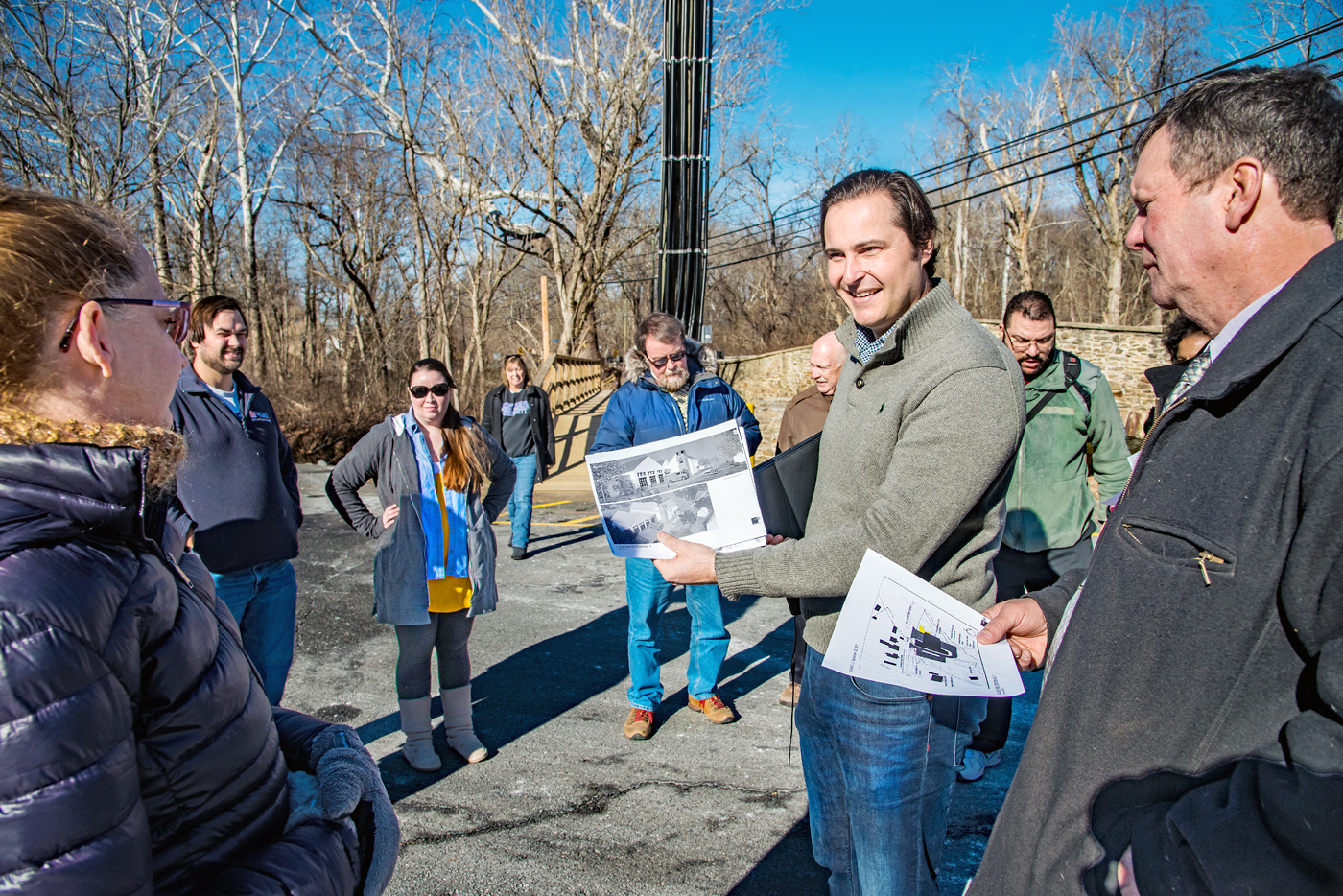 Sometimes organizations from opposite ends of the county put out a helping hand to each other. Such was the case on Saturday, January 20, 2018, when members of the Lovettsville Historical Society board travelled thirty miles to Aldie to learn about an historic preservation controversy along Route 50, near the Aldie Historic District.

As the Loudoun County grows, iconic places with deep meaning to long-time residents can get threatened. Often, these have stood long and been accepted as so much a part of the landscape that unless facing demolition by the processes of development or bureaucracy, no one thinks that much about them. Then and only then, they do. In this historic county, we quickly find just what an incredible journey through the past these structures or places represent.

Lovettsville, Loudoun’s northernmost incorporated town, just a stone’s throw and a few curves from the Potomac River and the State of Maryland, found itself in this situation when the County recommended tearing down its old high school, built to replace an earlier high school in 1927. Though altered through time to serve as the Lovettsville Community Center, the building was a key piece of the small town’s identity, remembered all these years since it closed in 1954 to become an elementary school. The white high schools at that time were consolidating into one large county high school with better facilities—Leesburg’s Loudoun County High School, still in use.   While the Lovettsville Community Center/Lovettsville High School still stands at present, it won’t for very much longer.   Our built landscape, we find, is far more than just functional: it is our font of memories to which we are deeply emotionally attached.

It is with this in mind, that the Lovettsville Historical Society (LHS) Board of Directors voted at their January meeting to take an investigatory field trip to another of Loudoun’s historic communities, the small southern Loudoun mill village of Aldie. Invited by a sister historical organization, the Aldie Heritage Association, the Lovettsville board members were responding to the controversy over the County’s proposed removal of several historic buildings along the John S. Mosby Highway in that village.

One in particular, the iconic stone Woodburn, is said to have served Little River/Ashby’s Gap Turnpike travelers as well as the nearby Aldie Mills and the citizens of the village. This building was old when Mosby attacked federal troopers from Vermont at Aldie Mill in March 1863, fighting that got as close as thirty yards from Woodburn, and again when Custer and other federal cavalrymen clattered past to fight at the bloody Battle of Aldie against J.E.B. Stuart just west of the village, on June 17, 1863.

Woodburn and three other adaptively-used houses are scheduled to be torn down to make way for a new firehouse at Aldie, which would be a much larger structure to be built along the turnpike and backed into the Bull Run Mountain next to the current 4½-bay firehouse. Fire apparatus has grown in size since volunteer company No. 7 opened its new station in 1970, and the Aldie area has as well. This is the third site the County of Loudoun has suggested.

There were several concerns motivating the LHS board in deciding to go on a Saturday morning field trip to Aldie. Rich Gillespie, a new board member, confessed to some interest in getting to ride on LHS President Fred George’s “Loversville” 25-passenger bus, but indicated that was certainly not the driving force to go. LHS board members were concerned that the County was not being sensitive to the historic nature of Aldie, one of Loudoun’s best-preserved and historic villages–but not famous like Waterford or the Old Town part of Leesburg. This resonates because Lovettsville finds itself in a similar situation. They wondered about the degree of impact of the loss of this particularly historic structure (Woodburn) on Aldie’s streetscape and its priceless historic ambiance—something you have to see for yourself to decide. They were concerned over a potential lack of sensitivity by the County when putting a new structure into an historic village which does not fit it in terms of size (in this case quite large) or architectural cues, so they wished to learn more about the proposal.

Lovettsville Historical Society board members wanted to hear from their Aldie counterparts whether the County government had listened to the concerns of citizens when it comes to historic preservation. The LHS board members were mindful that Aldie-area citizens hope to maintain a firehouse in a central location for the service area, while maintaining their historic landscape.

President Florian Hauswiesner and other members of the Aldie Heritage Association met their Lovettsville counterparts after a tour of the Aldie Mill provided by NOVA Parks Site Supervisor Tracy Gillespie. They walked the short distance across Little River to the current Aldie Firehouse, and then on through the structures slated for demolition and on to the threatened Woodburn tavern building.   Impressed with the massive size of the site and the significant distance from the current fire station to Woodburn, many questions were asked, and the concerns of their colleagues from the Aldie Heritage Association were shared.

While the Lovettsville Historical Society’s Board of Directors did not see it as appropriate for them to make a stand on the Aldie Firehouse issue, they felt strongly that an investigative visit to establish kinship with another rural Loudoun historical organization facing a preservation challenge was an appropriate step to take. “The people that we met at Aldie were young, enthusiastic, entrepreneurial individuals who question bad planning decisions but are likewise willing to work with the county authorities for win-win solutions,” said long-time LHS member Mike Zapf. “What they want is not nostalgia, but a quality of life that does not entail bulldozing the landscape and historical landmarks.”

Melani Carty, another LHS board member, noted: “It is our duty to protect historic structures . . . Western Loudoun’s log and stone buildings viscerally remind us of life in centuries past, and give us a visual framework in place to imagine the events that took place there. Historic buildings like Woodburn give visitors, newcomers to Loudoun County, as well as longtime residents, an understanding of the significance and depth of history in our area.  Old buildings generate an authentic sense of local character and a unique sense of place that enriches our quality of life, and contributes to our tourism economy. Tear down old buildings, lose that sense of place.”

New LHS board member Claudette Bard said that her intention in traveling to Aldie, was to observe, listen and learn as much as she could. “The tour of the Aldie Mill was captivating,” Bard said. “Later on, as we toured the back of the tavern, I was fascinated by the several sets of brick steps built into the ground and how they led up the mountain. Melani mentioned perhaps there could be graves in the area behind the tavern. I agreed with her, thinking how families often buried loved ones behind their homes back in those days. A little while later, as a group of us stood in front of the fire house, Rich Gillespie painted a picture of a Civil War battle that occurred on the nearby bridge. He so eloquently described the positions of the soldiers and pieced together their predicament. For me, the entire visit to Aldie was a most precious learning experience.”

Gillespie spelled out their broader concerns. “I know I hope that from time to time, Loudoun’s local historical societies in Aldie, Purcellville, Lovettsville, Lincoln, Unison, the Short Hill area and any others may have reason to meet to share ideas, best practices, latest efforts, and show each other kinship and moral support,” he said. “We have our own areas of concern, but we all care about Loudoun, which has been such a special place.”

All photos, courtesy of Eric Wickstrom.