The 19th-century Mount Sinai Free Will Baptist Church, at “Little Britain” southwest of Lovettsville, has a history which is unique among the churches – black and white – in Loudoun County.

Its origins were in the Free Will Baptists of New England, especially Maine, who formed an anti-slavery society in 1843, and were vigorous campaigners for abolition.  After the Civil War, the Free Will Baptists established Storer College in Harpers Ferry – which had strong ties to Mount Sinai in Lovettsville.

During the Civil War, some Free Will Baptists joined the Union Army as soldiers or chaplains, while others travelled to accessible areas in the South to open schools and churches for newly freed slaves. One of these was Rev. Nathan C. Brackett who, considered to be physically unfit for the army due to a bronchial condition, became an agent for the U.S. Christian Commission, and was assigned to Phil Sheridan’s Cavalry Corps in the lower Shendandoah Valley. At war’s end, Brackett located in Harpers Ferry to conduct missionary work among formerly enslaved persons.  Brackett used his dual positions with the Freedmen’s Bureau and the Free Will Baptist missionary society, to start a school for freed slaves. Brackett and his colleagues also established schools in Charles Town, Martinsburg, and Shepherdstown.

By 1867, the school at Harpers Ferry grew into a teachers college, first known as the Storer Normal School, and later as Storer College. Storer trained many teachers for the black schools in Loudoun County and elsewhere, and eventually developed into a full four-year college.

Among those attending Storer College in the early 1880s, was Franklin Pierce Lewis of Lovettsville.  Born free in 1857, Lewis was a son of Priscilla Lewis, a free person of color and a property owner in the Lovettsville community. On December 26, 1881, Franklin Lewis married Fenda (Fendee) Gore, the daughter of David and Susan A. Baker. When Lewis completed the first phase of his studies at Storer, probably in 1882, he came back to Loudoun and, in 1883, organized the Mount Sinai Free Will Baptist Church and school, according to various Free Will Baptist histories.  In 1885, Lewis was ordained as a minister in Charles Town, and he assumed leadership of the Mount Sinai congregation shortly thereafter when the first pastor, one Rev. P.W. Johnson, died. He also served the Free Will Baptist Church in Pleasant Valley, on Garrett’s Mill Road, which still exists, and is now known as Mount Moriah Baptist Church.

In November 1883, the Loudoun Telephone, a Republican newspaper published in Hamilton, reported that “The colored people have organized a Baptist congregation at Lovettsville, and have purchased land from J.W. Goodhart, on which to build a church. They seem to have manifested great interest in their church matters….”

No record of a land transaction with Jerome Goodhart (a cabinet maker who owned substantial land on the east side of the town of Lovettsville) has yet been found.  The black Free Will Baptists did build their church at the intersection of Mountain Road and Britain Road, on property that had been owned by Adam and Mary Cooper.  In 1886, Adam transferred the property to Sallie Cooper. Sallie Mason Cooper had married Joshua F. Cooper in 1884; their relationship to Adam Cooper has not been determined, but they were all communicants at New Jerusalem Lutheran Church. Sally and Joshua F. Cooper clearly made part of the property available to the Mt. Sinai congregation, since the congregation began erecting a church on the property around this time.  Interestingly, the Coopers never required the Mount Sinai congregation to purchase the property, and it’s not even clear if they were paying rent.  It wasn’t until 1947 – long after the demise of the Mount Sinai Church — that family members of the former church acquired title to the one-half acre on which the church and its adjoining cemetery were located.

The church building was dedicated on October 23, 1887, but both the church and the school – a public school during the week – were already in full operation by that time. It was the custom among many churches at the time not to dedicate a new building until all debts incurred for the church construction had been satisfied – and indeed, Rev. Lewis announced that the church was debt-free at the time of its dedication.

Even though we have not yet located any records of the congregation for this period, we know of a couple of events that took place prior to the building’s dedication. On August 27, 1887, the first burial that we have been able to document, took place. This was of Ann America Paris who had married Henry Bird in 1879 at New Jerusalem; she died in 1887 at 26 years of age.

On that same date, August 27, 1887, the Free Will Baptists were scheduled to hold a “Union Sabbath School Celebration” on Philip Souder’s property, described in an article in the Loudoun Telephone as “opposite the Baptist Church, about 3 ½ miles Southwest of Lovettsville.”  The event was to involve the Sabbath Schools from Mount Sinai, as well as those of Hillsboro, Waterford, Lovettsville, and Mt. Pleasant.  Orations were promised by speakers from Hillsdale College in Michigan (a Free Will Baptist School), Storer College, and others. The local Committee of Arrangements consisted of:  J.W. Parker, Chas. Timbers, Thos. Timbers, Jas. Curtis, Austin Paris, and Rev. Lewis.

In the next week’s issue of the Telephone, a letter was published by one W.H. Gaines, who said that he was the pastor of the Methodist churches in Waterford, Hillsboro, and Lovettsville.  He said that his churches would not join in the contemplated celebration, and that he had never heard anything about this until reading about it in the previous week’s Telephone.  There was no further coverage, so we don’t know if the event took place or not – but the Free Will Baptists were sure aggressive in promoting it. 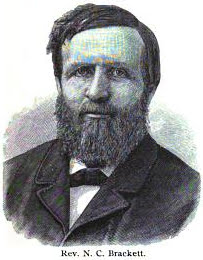 The dedication of Mount Sinai church on October 23, 1887 was a big event. The service featured Rev. Nathan C. Brackett, the president of Storer College, accompanied by other Storer officials. In a letter published in the Telephone, Rev. Lewis thanked “the good people of Shinar and Lovettsville neighborhoods for their liberality in giving money and materials” to erect this church, and for “taking great interest in this glorious work, which is intended to promote happiness in our community and the advancement of the Redeemer’s Kingdom.”  (“Shinar” was the name for the German Lutheran community near Morrisonville that is now called Zion Lutheran Church; it was a “preaching point” of New Jerusalem Lutheran Church at the time and for over a hundred years after this.)

In the five years after its founding in 1883, the Mount Sinai congregation grew from six to 60 members, according to the Free Will Baptist Cyclopedia published in 1889. A couple of years later, the Free Will Baptist Register listed 55 church members, and 75 young people attending Sabbath School.  Mount Sinai was a seven-days-a-week facility. The church was used as a public school during the week, and then Sabbath School was held on Saturday, and worship services took place on Sunday.

While we haven’t located any membership records for Mount Sinai, we believe that the following families were among those who considered Mount Sinai their church home:  Beaner, Bird, Curtis, Furr, Hogan, Howard, Jackson, Morgan, Moten, Paris, Parker, Payne, Redman, Timbers, Trammell, and Young.

Rev. Lewis taught in the public school – known variously as the “Brittain” or “Guinea” colored school — in its early years. For at least the 1891-95 school years, J.B. Spriggs, who was trained at Storer College, taught at the school. In the 1880s, Spriggs had been one of a select group of “Pupil-Assistants” at Storer; these were students who assisted the instructors.

Rev. Lewis appears to have left Mount Sinai during the 1890s. By the time of the 1900 Federal census, Frank P. Lewis and his wife were living on Howard Avenue, in the Hillsdale area of Anacostia, in the District of Columbia. His occupation was listed as Doctor of Divinity, and, according to other documentary sources, he was the pastor of the Campbell AME Church in Hillsdale, Anacostia, Washington, D.C.

Back in Lovettsville, Mount Sinai’s church membership was down to 15 adults and 30 Sunday School pupils by 1911. The Pastor at that time was the Rev. G.L. Dandridge of Weverton.

As black families moved out of the area – many to Montgomery County, Maryland – church membership continued to decline, until Mount Sinai ended worship services in the 1920s.

According to historian Eugene Scheel, the last of the famous Mount Sinai picnics was held around 1925. Scheel also reports that in the late 1930s, the evangelists Chester and Lucy Frye started holding revival services at the Mount Sinai church building, and continued their services until around 1950.  A neighbor remembers that the Frye’s held services for both the white and black communities.

Burials continued in the church cemetery until at least 1955.

Around 1980, a homeless man, said to be from Brunswick, was living in the old church building, and reportedly made a fire to keep warm.  The fire spread and destroyed the church’s frame structure. All that remains today of that church with its unique history, is the stone foundation, which can still be seen today when not obscured by briars and other overgrowth.

There is more to the story, which we will take up in futures issues of this newsletter, including the strange story of how the church property ended up being sold to private owners. Watch this space….