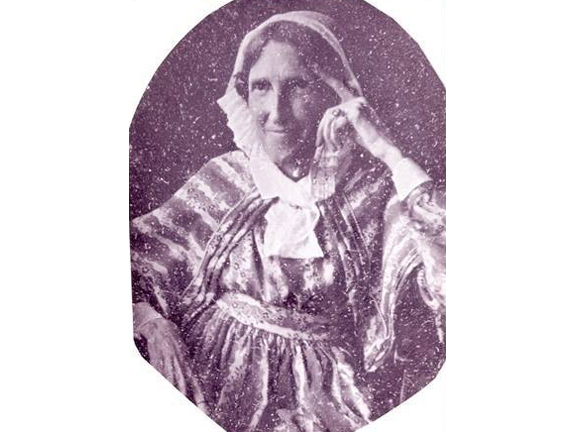 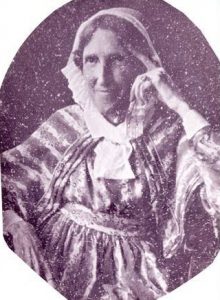 Educator and abolitionist Margaret Mercer was honored at the unveiling of the Belmont Chapel Historic Marker at St. David’s Episcopal Church and School in Ashburn on Sept. 9.

Margaret Mercer was a cousin of Rep. Charles Fenton Mercer, the Federalist-Whig political leader who build the Aldie Mill.

In 1836 Margaret purchased the Ludwell Lee estate Belmont, where she established a school which broke through the conventions of the time – educating girls as well as boys, blacks as well as whites, and children of the poor as well as of the wealthy.  She insisted her pupils learn mathematics and science, astronomy, philosophy, and religion.   She also included courses in the latest agricultural methods, hopingly thereby to lessen the local economy’s dependence on slave labor. She taught all of her African-American employees to read and write, which was illegal under Virginia law.  Mercer was also a leader of the American Colonization Society, which advocated the repatriation and resettlement of slaves in Africa, giving rise to the country of Liberia.

St. David’s church has close ties to Liberia today, and that African nation was well-represented at the dedication ceremony on Sept. 9, including by a spokesman for its Ambassador to the United States. 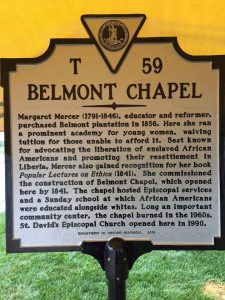 In 1841, Margaret Mercer built Belmont Chapel, designed by her cousin, the Baltimore architect Benjamin Latrobe. The chapel became a center for community worship, education, and social activities, with its last known use being for a wedding in 1951. Subsequently, the road leading to the chapel became overgrown and the property fell into disrepair. A fire set by vandals in 1963 destroyed most of the building except for the foundation and a portion of the stone façade.The 250 graves surrounding the chapel and overgrown and lost to memory.  In recent years, as suburban development overtook the Ashburn area, the Chapel site and graveyard were rediscovered, and a researcher also discovered that the Episcopal Church still owned the land around the old Chapel.  The graveyard and a monument erected in her honor by Margaret Mercer’s students were restored, and St. David’s Church and School were opened in 1990.

As historian Eugene Scheel pointed out in a 1992 Washington Post article, Margaret Mercer was controversial in life and death; and even in the late 19thand the 20thcenturies, efforts were made to erase the history of her contribution to education in Loudoun County.

Eugene Scheel, “A Life Devoted to Freedom and Opportunity,” the life of Margaret Mercer,