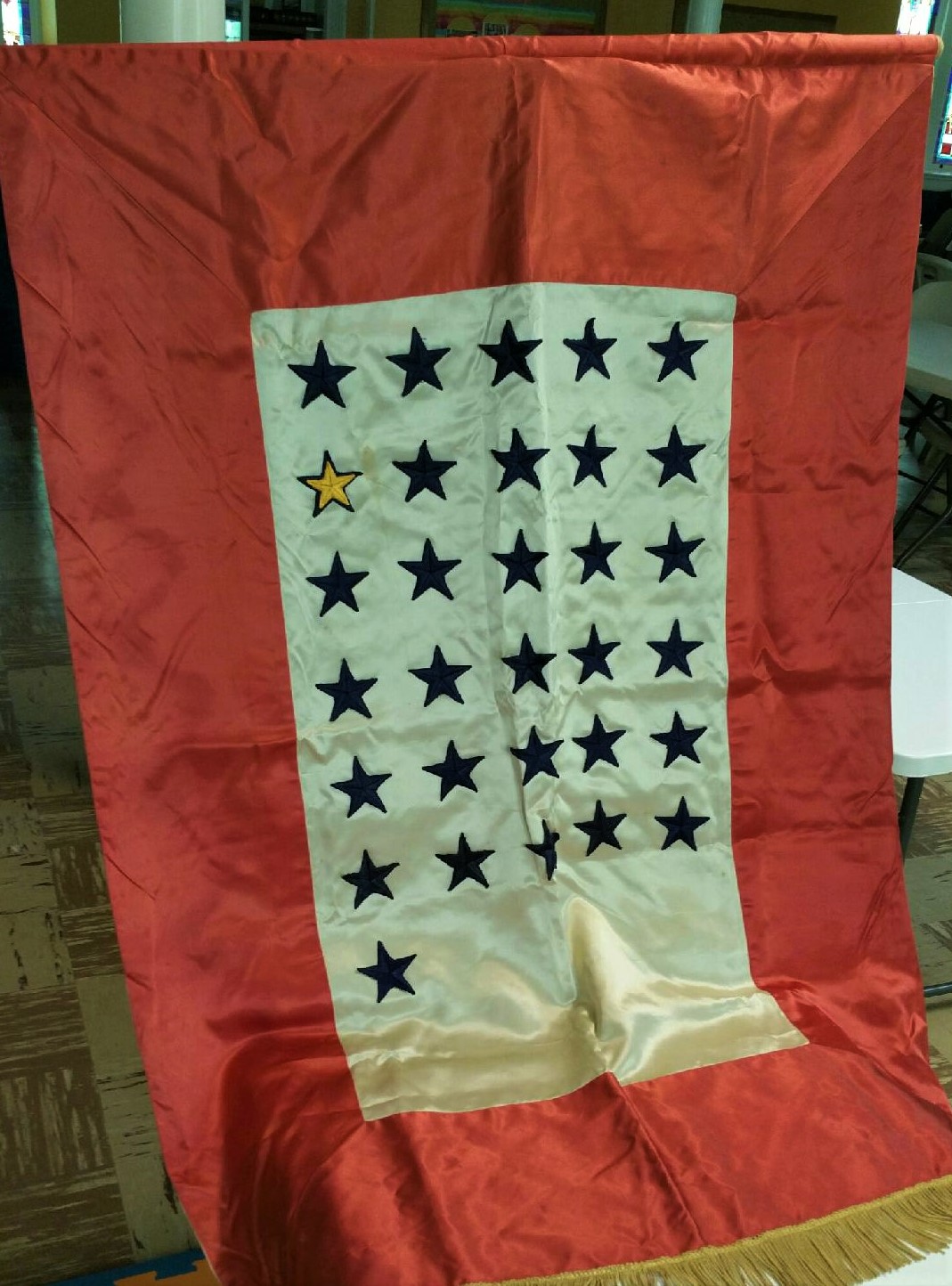 To accompany the dedication of the Gold Star Families Memorial Monument at the south entrance to Lovettsville on September 11, we thought it would be fitting to recall the story of the Gold Star service flag at New Jerusalem Lutheran Church, just across the road from the site of the new Gold Star monument.

On Flag Day, Sunday, June 14, 2015 – in the midst of New Jerusalem’s year-long 250th Anniversary celebration — David Spring Whipple gave a “History Minute” presentation on the service flag that flew in the church vestibule during World War II.  With the original flag on display in the sanctuary, Whipple reviewed the history of service flags going back to World War I, when they were displayed from homes, places of business, churches, and schools to indicate the number of family members either serving in the armed forces, or who had died in service.  “Service flags have a deep blue star for each living member in the service, and a gold star
for each member who has died,” Whipple said. “Usually hung in an exterior window, the banners became commonplace in homes where anxious, yet proud, families waited for word from their sons, husbands, brothers, and friends striving to free those an ocean away.”

“As World War I continued and men were killed in combat, fatally wounded, or died of disease, the gold star was substituted and superimposed upon the blue star, so as to cover it completely.  The gold star was meant to convey the honor and glory deserving of the individual who had made the supreme sacrifice for his country.”

“The service flag came into use again in World War II,” Whipple continued, “when the men and women of the United States took up arms to defeat fascism and tyranny across both oceans.”

Pointing to the flag, Whipple noted: “New Jerusalem’s Gold Star flag has 30 blue stars; and as you can see, the flag has one gold star!”

“So who does the Gold Star on New Jerusalem’s flag represent?” Whipple asked that Sunday, and answered that although research was underway, “we haven’t found the answer yet,” but that the search was continuing.

A few months later, on Sunday, October 4, 2015, Edward Spannaus presented another “History Minute,” which told the rest of the story. Here it is, as presented in church on that day:

On June 14, David Whipple presented the History Minute on the Gold Star flag, the service flag that we flew in the vestibule during World War II. There are many Blue Stars – each representing a member of New Jerusalem who served in the United States Armed Forces during the Second World War. But there is only one Gold Star – for a serviceman who died in the war – but we didn’t know who the Gold Star represented.

Now we do know, and we also know how the Gold Star was placed there.  It was in honor of Raymond Luther Cooper, who died in Italy on April 23, 1944. We first got information on Raymond Cooper’s death during the war from the diary of Mrs. Tobler,* which we’ve previously discussed. I asked her grand-daughter Donna White to look for any entries in the diary that might shed light on a soldier who died in World War II, and she found an entry concerning Raymond Cooper.  From that, we were able to trace it out, and to document that indeed, he was the soldier represented by the Gold Star.

Raymond Cooper served with the U.S. Army’s 82nd Airborne Division, in the 307th Airborne Engineer Battalion.  His battalion was part of the invasion at Anzio, Italy in January–March 1944, which may have been where he was wounded. Before that, the 82nd Airborne was part of the landing in Sicily in 1943, and then at Salerno.

According to a letter sent to his parents by a Lutheran military chaplain, Raymond was wounded on April 12, 1944, and succumbed to his injuries on April 23.  However, some local newspaper accounts say he was in the hospital for a couple of months. He was buried in Italy, and today rests in the Sicily-Rome American Cemetery and Memorial, which is near Anzio and not too far from Rome.

Raymond was the son of Harry J. Cooper and Viola Compher Cooper. Just yesterday we found a clipping in a scrapbook downstairs, an article about their 65th wedding anniversary, which mentions Raymond’s death in Italy during the war.  Raymond’s parents were members at New Jerusalem for most of their lives, the article said.

Raymond was born on January 4, 1917, and was baptized here on December 3, 1920 by Pastor Meyer. He attended Lovettsville High School, and his trade was that of a brick and stone mason. He was married to Marian Deavers, of Berryville.

A memorial service was held here on Sunday, September 3, 1944, after the regular Sunday services, according to an article in the Blue Ridge Herald. The chaplain’s letter was read by Pastor Tobler. The chaplain said he had visited Raymond eleven times in the hospital, and that Raymond died in the Faith, giving his life for his fellowmen and his country.

He said that Pvt. Cooper was given a religious burial on April 25, 1944, and that his remains lie in a beautiful well-kept cemetery in Italy, protected by our Allies.

The article in the Blue Ridge Herald concluded:

“The blue star, representing Pvt. Cooper on the service flag in the church, was covered by a gold star by his father, H. J. Cooper.”

*Viola Tobler was the wife of Rev. Alvin Tobler, who served New Jerusalem from 1927 through 1945.