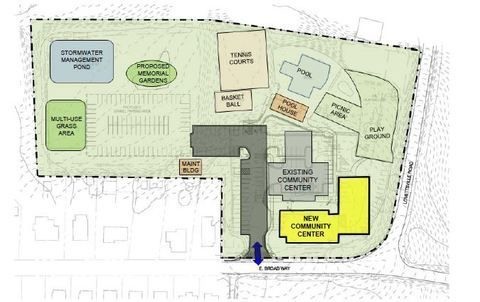 In a public statement, the Lovettsville Alumni Association, along with the Lovettsville Historic Society, wrote, “We feel that the alternative of renovating the present building, and its importance to the community, was not adequately considered. Renovating this building back to its original grandeur would add to Lovettsville’s historical significance.”

The community center decision dates back to a 2007 county bond referendum, which was approved by Lovettsville voters, to refurbish the center in addition to facilities in Lucketts and Bluemont.

However, a consultant hired by Loudoun County Parks & Recreation – the entity that owns and manages the Lovettsville community center – determined it would be more cost-effective and advantageous to construct a new building. That decision was based on the challenges of making the older five-level structure expandable and fully compliant with the Americans with Disabilities Act (ADA).

The current community center served as a Lovettsville high school and elementary school from the 1930s until 1976, when a suspicious fire gutted the building. It was then re-purposed as a community center.

Judy Fox, vice president of the Lovettsville Alumni Association, argues the building has a special place in many residents’ hearts. “These feelings are something that those who are new to Lovettsville don’t have. Once it is gone it is but a memory,” Fox said.

But the costs, timing and feasibility of renovating, or incorporating the old structure into the new community center, just don’t add up, according to Lovettsville Mayor Bob Zoldos.

“The county has already spent a lot of money on this process and I think their decision to offer our community a new building is pretty sharp,” Zoldos said. “This is smart government.”

Zoldos says the new building will expand services and amenities while improving security and safety for residents. The new facility will also be single level, include much-needed expanded parking and meet the growing demand for day care and pre-school services in town.

Zoldos and the Town Council supports a “Heritage Wall” that will tell the story of the building and its unique place in Lovettsville history, something that doesn’t exist at the current facility. “This will bring its history back to life,” he argues.

Some members of the opposing groups have suggested the public decision-making process about the new community center hasn’t been handled correctly by the county and town governments.

“That’s just not fair,” he said. “The bottom line is the process is well under way and has been actively advertised.” He says his office promoted each of the new community center meetings through his weekly emails, as well as the town’s website and regular notifications to residents, which numbers over 900 residents.