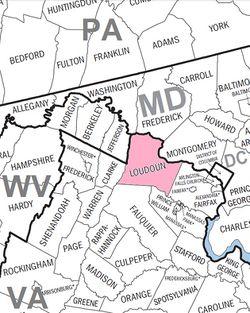 By Cornelius F. Foote Jr.,
Washington Post,
November 25, 1989.
Nancy Orndorff, 54, describes herself as a die-hard resident of Loudoun County. But more than that, she is sold on Lovettsville, her home for more than 30 years. “I’ve never really thought about moving,” said Orndorff, one of the many Lovettsville residents who can’t believe their little town has become so popular. Orndorff is one of the 750 residents who enjoy the town’s down-home, small-town feel and its proximity to Maryland, West Virginia and the District of Columbia, which is about 55 miles to the southeast. In recent years, residents of closer-in Washington suburbs have moved west to Lovettsville to get a taste of the rural solitude and slower pace. These “newcomers” can drive to downtown Washington in 90 minutes (non-rush hour) or hop the nearby Amtrak or Maryland commuter trains that run from Harper’s Ferry (about eight miles away) or Brunswick (three miles away) to Union Station. Lovettsville Mayor Kenneth W. Harrington, 66, has watched the “wide open spaces” become filled with “all types of new homes.” He said the town’s accessibility to Baltimore, Washington and Charles Town, W.Va., has made Lovettsville an attractive place to live. Many of the area’s residents would like to keep their village a secret. But the growth is forcing Harrington and the town’s six council members to come up with new plans and money to deal with it. Town officials are rewriting their zoning ordinance and comprehensive plan, and they are planning a $5 million water and sewer project that includes a hookup to the Potomac River, a project far beyond the town’s $200,000-a-year budget. At the same time, Loudoun County Supervisor Betsey Brown (D-Catoctin), whose district includes the Lovettsville area, has been trying to convince county officials that they need to adopt an area planning policy to better manage development around the town. Brown and other residents don’t want shopping centers and huge subdivisions scattered about the town and its neighboring countryside, like those that have sprung up in some communities to the east. “Development is a little bit hodgepodge and we’d like to see it happen more cohesively,” said Peter L. Heichler, acting president of the 100-member Lovettsville Citizen’s Association. A German settlement founded in the early 1700s, Lovettsville is a simple town. It consists of a few winding streets, Berlin Turnpike, Church and Loudoun streets and Pennsylvania Avenue to name a few. It is surrounded by horse farms and rolling countryside, and the Potomac River is only a few minutes away. There are various styles of single-family homes lining the streets: Cape Cods with large porches, huge Victorians, red brick colonials, ramblers and few pockets of aluminum-sided town houses. House prices start at about $180,000 and go to $400,000 and higher. The town hall is a one-story building next to the narrow, two-floor Lovettsville Museum and Library. By next spring, the library will move to a newly constructed building that will quadruple its current size. The museum, whose artifacts have been packed away in the second floor of the existing building, will reopen in the current structure. Two of the town’s — and Loudoun’s — oldest churches are St. James United Church of Christ, founded in 1733, located downtown, and the New Jerusalem Church, founded in 1765 and perched on a hill at the town’s entrance. Services at the latter were conducted in German until World War II. There are some country stores that have been around for ages, like McClain’s and the Discount Mini Mart, which compete with the town’s High’s Dairy Store. The High’s has become a local meeting place in recent years. When David M. Nalls, 32, bought the 40-plus-year-old Mini Mart 18 months ago, half of the store was stocked with hardware and the other half with food. Now, Nalls, who operates the store with his wife, Mary Ann, 30, rents videos, and sells deli sandwiches and pizza. During the summer, he sells live minnows for bait; during the fall, it’s pumpkins, with Christmas trees in the winter and flowers in the spring. Lovettsville residents said they do some of their food shopping in nearby Brunswick or Frederick because there is no tax on food in Maryland. Others go to Leesburg or Sterling. The community center provides year-round activities for the area’s teenagers and adults. But this past summer, the new swimming pool became a magnet not only for Lovettsville residents, but for many who live north of Leesburg, a 15-mile drive. The 15-year-old community center offers a variety of activities, including arts and craft lessons, a quilt show, dinners for senior citizens on the first and third Thursdays of every month and an annual Fourth of July parade. “I didn’t guess when I was a youngster that there would ever be a community center in Lovettsville,” said Orndorff, who has managed the center since it opened. For a dinner out, there are two restaurants: Martha’s Village Inn, owned by Martha Bernhart, where classical or ragtime music plays in the background and the food is French, Italian or American. The other eatery is Bonnie’s Country Kitchen, owned by Bonnie Hawker, meat-and-potatoes sort of place that has a rock-and-roll jukebox. While the town’s growth may boost some businesses, not all the locals welcome it. “The more people move into the area, the less closeness you have,” said Jamie McKimmey, 32, who helps run the local BP gas station on Berlin Pike with his father, James, 55, and brother, Bruce, 30. “I can’t keep up with everybody now.”https://www.washingtonpost.com/archive/realestate/1989/11/25/newcomers-strain-little-lovettsville/de235883-fa87-4648-80ba-21c3ac458644/