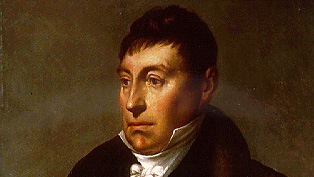 One year before the 250th Anniversary of the Declaration of Independence, the nation will celebrate the 200th anniversary of the visit by one of the leading figures of the American Revolution, the Marquis de Lafayette. Lafayette’s 13-month-long Farewell Tour in 1824-25 sent him through all 24 states of the Union, bringing out millions to greet him as a hero of the battle for freedom from the British Empire.

In this area, the Revolutionary War hero was feted with major celebrations in both Leesburg and Frederick, Maryland. Contemporary reports indicate that most of Leesburg’s 1500 citizens turned out to march through the streets cheering the guest of the nation.

Recently, the story of the French general’s visit to the Leesburg area was presented by Loudoun Museum Visitor Experience Coordinator Lori Wysong to a Joint Chapter Meeting of the National Society Daughters of the American Revolution held at the Belmont Country Club. Her March 5 talk was followed by a tour through the Belmont mansion, which was the home of Ludwell Lee, one of Lafayette’s aides-de-camps during the war.

This report on Wysong’s presentation is intended to serve as an introduction to this historical event for our readers. We expect much more to follow in the months and years to come.

50 Toasts to the General and the Revolution

Wysong began with a brief description of Lafayette’s tour throughout the nation. She characterized it as a public relations effort by the U.S. government, which, under President James Monroe, had invited the General to visit as “the Nation’s Guest.” One purpose of the tour was to showcase the progress that had been made by the nation since the Revolution, including the mega-project of the Erie Canal, which was just nearing completion. That project, and the growth of industry and agriculture elsewhere, became the subject of reports sent back to Europe by Lafayette’s secretary Auguste Levasseur.

The General’s visit to Loudoun came near the end of his tour, which had begun in New York City on August 15, 1824. His travels took him approximately 6000 miles, and by late summer of 1825, the grand tour was coming to an end. In early August, while visiting with President John Quincy Adams in Washington, Lafayette expressed the wish to visit with his old friend James Monroe, who was then living on a plantation south of Leesburg.

The President and Lafayette set out for Loudoun County together on August 6, 1825. Wysong recounted the famous story about their travels, which speaks volumes about American respect for the General. After President Adams paid the toll for the trip West, he heard the gatekeeper shouting after him. The problem? The President had underpaid the toll. Adams dutifully made up the difference, but before the gatekeeper left the scene, he noticed that the person in the carriage with Adams was General Lafayette. At that point, he became apologetic, saying that the two needn’t have paid the toll at all!

Lafayette and Adams were hosted by Monroe for three days, after which, on Aug. 9, they made their way to Leesburg, at the invitation of the local militia. It was a grand procession, with citizens lining the route. As they entered the town, a cannonade was sounded, and the entourage, accompanied by cavalry, infantry, and other military men, processed through the town. They ended up at the Courthouse, where cheers, speeches, and eventually a grand banquet commenced for a grand evening of celebration.

Wysong painted a vivid picture of this gala affair. Thousands of people were reported to have attended, including the entire population of the town of Leesburg and others from the surrounding area. Fifty toasts were offered at the banquet on the courthouse lawn, giving homage to Lafayette, the Revolution, and revolutionary ideals. She highlighted several of those toasts, which I reproduce here:

On to Belmont Plantation

Lafayette and his party spent the night in Leesburg and ended the next day’s activities at the Belmont plantation, home of Ludwell Lee. Lee had been Lafayette’s aide de camp, so Lafayette had visited the home previously. The General brought with him two fireplace surrounds, as gifts, which still stand in the main house (see picture).

Once again, the General’s visit was the occasion for a grand celebration and attended by huge crowds. Indeed, the guests were so numerous that the party had to be held in both mansions on the estate. Wysong noted that accounts of this event were not reported until much later, so that their reliability is less trustworthy. What accounts exist include the role of dozens of enslaved persons,[1] holding lanterns along the pathway between the two mansions for the benefit of the guests.

Wysong concluded her talk with a brief summary of the impact of Lafayette’s tour on the country, including the naming of many towns and children after the French-American hero[2] of the Revolution.

After the DAR chapter meeting concluded, approximately 30 members, including this author, went on a tour of the old part of the mansion, which has been restored to its original condition and kept in excellent shape.  The pictures included here are of the oldest part of the house, and include the entranceway, the dining room, and the “Lafayette parlor,” which features murals of rural life in bright color.

The newer part of the mansion is used by its owners, the Belmont Golf & Country Club.

Preparing for the 250th Anniversary

Over the next two years, history buffs and others can expect to see many more events devoted to discussing General Lafayette’s 1824-25 tour and its significance. The American Friends of Lafayette (AFL), a national society devoted to keeping the General’s legacy alive, is currently making plans for effectively replicating the tour in all 24 states that he visited. As part of that effort, the AFL and collaborating organizations, including the Sons and Daughters of the American Revolution, will be sponsoring educational events.

An article summarizing the plans can be accessed here.

AFL members have appropriately stressed the fact that Lafayette’s tour came in the midst of one of the most contentious presidential campaigns in American history. They assert that it was conceived by President Monroe, who was about to leave office, as a means of trying to unify the nation around the founding principles of the Revolution, as well as to honor and express gratitude to the General. It is the AFL’s hope that commemorating Lafayette’s tour, on its 200th anniversary, might indeed play the same role in our own fractured political environment, by highlighting the noble principles which inspired our Revolution and underlie our Republic’s founding.

Those interested in working on the Anniversary project in the area should contact Chuck Schwam at americanfriendsoflafayette@gmail.com.

[1]        Lafayette was likely quite chagrined by the presence of the enslaved, since he was a committed abolitionist, and used this tour to argue with his old friends, like Thomas Jefferson, on the need to end slavery as incompatible with America’s republican ideals.

[2]        Lafayette had dual citizenship, stemming from his time here during the Revolution.

*Nancy Spannaus blogs at https://www.americansystemnow.com. She is the author of Hamilton Versus Wall Street: The Core Principles of the American System of Economics.