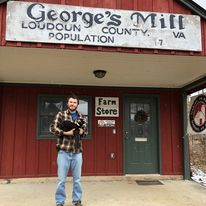 The Georges, the Johnsons, and related families in Lovettsville

Here’s what Sam had to say:

Charles Johnson is my great x3 grandfather. Any Lovettsville local readers who aren’t related to him, might be related to his wife and descendants.

Charles Johnson’s wife was Jane Conard, descended from the George and Wirtz (Virts) families. Her mother was Elizabeth Wirtz, and Elizabeth’s parents were Jacob Wirtz and Elizabeth George, a daughter of John George, who established the mill at George’s Mill. Eliza Grubb George (wife of Samuel W. George), who established the stone house and farm at George’s Mill, was also a granddaughter of Elizabeth George. Her husband Samuel George was a nephew of Elizabeth George, and a first cousin once removed to his own wife and Charles Johnson’s wife. 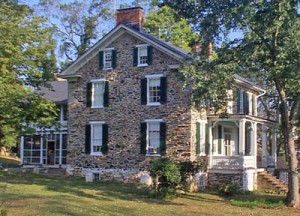 Samuel W. and Eliza George lived in the stone house at George’s Mill once it was completed just after the Civil War. (That house is described in the Lovettsville: the German Settlement book on pages 107-108.)  During the war, they lived next door on the current Riddlemoser Farm.

I’m not sure where Charles and Jane lived during the war (it may have been at the Johnson family farm and distillery on the south side of Long Lane), but eventually Jane inherited the Stone House on the Dutchman, built by Jacob Wirtz and Elizabeth George, and then Jane and Charles lived  there. There’s a little history in the section about that house in the Lovettsville: the German Settlement book (p. 108). That house is along Elvan Road, but at that time the property extended all the way over to Irish Corner Road across from George’s Mill Road, and bordered George’s Mill Farm.

When Charles and Jane died, Ora Virts inherited part of the property, and she and her husband John Eb George bought the rest of it from other Virts and Johnson relatives. The Johnson Farm thereby became known as the George Farm.

Ella and R.G. Johnson built a farm house next to George’s Mill, across George’s Mill Road from the stone house, which Ella eventually inherited from Samuel and Eliza. There was a store and a post-office there, and a little village with a blacksmith shop nearby,  at one time. The George Farm thereby became known as the Johnson Farm. They had three daughters Frieda, Esther, and Columbia. Columbia married Charles Lamar Wire. Columbia and Charles were my great-grandparents, and my their son Robert Lamar Wire married Fran Wire; they are my grandparents. Some folks probably still consider it the Johnson Farm, but for as long as I’ve been around we’ve called it George’s Mill Farm.