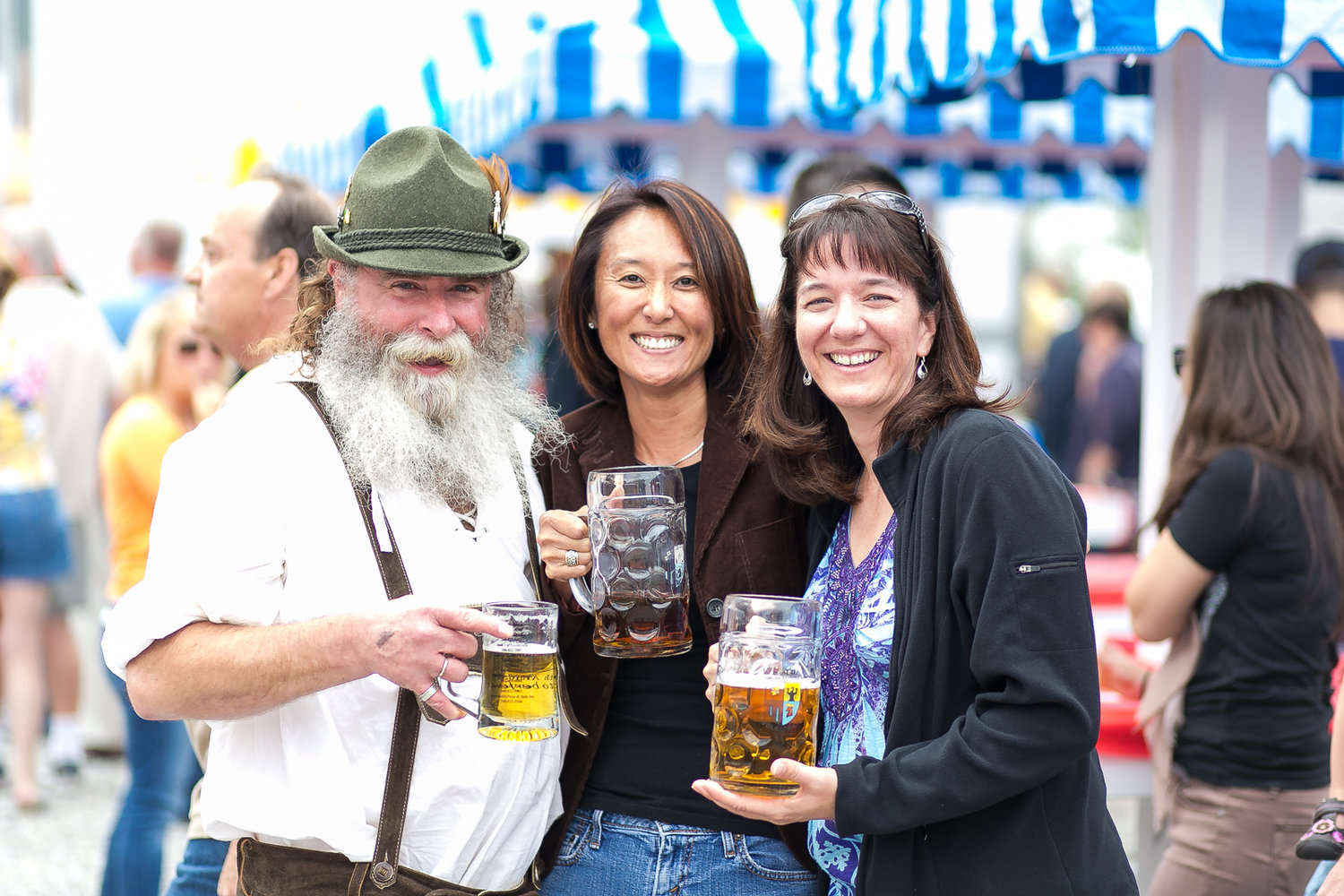 The History of Lovettsville’s Oktoberfest, by Michael Zapf (2018)

“Oktoberfest” conjures up the famous Munich Oktoberfest that attracts millions every year, an extravaganza that began in October 1810 as a celebration of the marriage of Crown Prince Ludwig (later King Ludwig I) of Bavaria to Princess Therese von Sachsen-Hildenburghausen.

Lovettsville, however has no apparent connection to Bavaria, Munich or Ludwig. The first settlers of the “German Settlement” came from the region along the upper Rhine valley and settled here as early as the 1720s, long before the Oktoberfest in Munich.

The roots of the Lovettsville Oktoberfest hearken back to an almost forgotten tradition, Erntedank or Harvest Thanks which traditionally takes place on or around Michaelistag or Michaelmas (29th of September, the Feast of the Archangel St. Michael and All Angels in the liturgical calendar). Typically the German, Austrian or Swiss harvest thanksgiving celebrations (Erntedankfest) are rural harvest time observances with church services, parades, music, dancing, food, and country fairs. The Oktoberfest tradition that started in Munich as a public wedding celebration actually coincided with the traditional Erntedank festivities.  Erntedank was not exclusively a beer fest. In regions along the Rhine, Main, and Danube rivers, Erntedank also coincides with the Wine harvest.

The original German heritage churches of the German Settlement, St. James United Church of Christ (formerly known as the German Reformed Church) and New Jerusalem Lutheran Church) still observe the tradition of thanks and service at this time of year.

Today’s Lovettsville Oktoberfest is a revival of the old German village Fest tradition and grew out of planning for the National Bicentennial celebration starting in July 1974.

On that occasion projects included gathering and publishing the stories and events that are the history of the German settlement, the renovating the derelict old Potterfield butcher shop as a library and museum, and staging seasonal events, parades, and entertainment.

Jean S. Mohler, then chairperson of the Bicentennial Committee records that “since Lovettsville was settled by Germans, it would enrich our celebrations if we used this heritage in making our events as Germanic as possible including German food, music and customs”…”In planning an activity for the fall, the committee remembered the Germanic celebration of Oktoberfest. We voted to have our “fest “in September … We decided to invite competent Lovettsville artisans and craftspeople … German foods, dress and music were to carry out the Oktoberfest theme and, in addition the Lovettsville Lions Club offered to provide a barbecue, complete with pigs in roasting pits.”

The Bicentennial celebrations of 1976 and Lovettsville’s first attempt at staging an Oktoberfest were a resounding success. Many older citizens who were there and who participated remember and speak of it still. The Lovettsville Historical Society and Museum is still operating in the renovated Potterfield butcher shop and the history Lovettsville, The German Settlement has been published and is in its third printing. 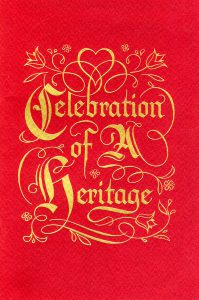 The 1983 Tricentennial of the first organized migration of German immigrants to the British colonies in America reinvigorated the community to tap its German heritage and revive the Oktoberfest. Proclamations by President Ronald Reagan and Governor Charles officially recognized the Tricentennial and called upon all citizens to observe it in appropriate ceremonies and festivities. Entertainment for the festival featured a German band concert at the elementary school auditorium, waltz and polka contests, the U.S. Navy Band, “Country Current,” Dale Wise a strolling accordion player, a Sunday hymn sing, and local crafters and artists. The souvenir program was designed by artist Paul M. Breeden, a calligrapher for the White House and illustrator for National Geographic magazine and other publications, a souvenir still much sought after and treasured. The 1983 Tricentennial Oktoberfest, however, did not start the tradition that you see today. It was a prelude, a kind of pilot of what the Lovettsville community could aspire to and achieve.

We mark 1994 as the start of the Lovettsville Oktoberfest tradition. It began as a modest affair which included a German Supper at the Community Center, the pancake breakfast at the Lovettsville Elementary School, the Volksmarsch (a 10 kilometer hike that looped around the town), crafters selling their creations, a flea market, grilled hot dogs and hamburgers, an exhibition of local artists, the library book sale and open-house tours of the local churches and masonic lodge. A local band played “rockabilly” on a front porch. The historical society played tape cassettes of traditional Oktoberfest music at the museum. In an interview in the Lovettsville Citizen of September 1994, Mayor Elaine Walker commented that the organizers wanted to hire a German band, but the cost was too much. She hoped the Oktoberfest would always be free. The organizers were operating within a budget of $1000.

Throughout the 1990s Lovettsville’s Oktoberfest was a modest affair due to the budget constraints and resembled a country craft fair, rummage sale and bake sale rolled into one. By 1999 things began to change. New ideas for entertainment, food and scope came with new committee members and an ever enthusiastic Mayor Walker and energized town council.

Jim Hill, a retired Army Chief Sergeant Major and his wife Christine, living near Taylorstown and members of New Jerusalem Lutheran Church, joined the Oktoberfest planning committee. The couple became a driving force to make the Fest authentically German. Christine, German by birth, had wondered about the lack of German flavor in a town known as the German Settlement. The couple recruited friends from the German-American community throughout the Baltimore and Washington metro area to be part of the Lovettsville Fest. They contacted local German bands at Blobb’s Park in Jessup, Maryland, and organized food and refreshments that featured Knackwurst, Bratwurst, Thueringerwurst, Kartoffelsalat, crispy Semmelbrotchen, Sauerkraut and cakes. They advertised through the German Radio Club which broadcast out of Baltimore and engaged The Continentals Band to play German tunes in the main tent under the walnut tree behind the town office (a 40×60 foot affair set up behind the town office with 10×20 foot dance floor).

The German community responded. They came, the old and not so old couples from Baltimore and Washington with their thick accents, dressed in Bavarian Tracht and Dirndl dresses and dancing to the strains and rhythms of polkas, waltzes and laendler that had not been seen or heard in the old German Settlement for more than a century.

The Washington Saengerbund is one of the oldest, still active German-American choral society in the United States, founded in 1851. It is a not-for-profit incorporated cultural society.  About 50 active singers make up the mixed chorus. The Saengerbund has performed at state visits at the White House, at official dedications, and in concert at the German, Austrian and Swiss embassies. Funding is raised through donations, concert ticket sales and regional events such as the Lovettsville Oktoberfest.

In 2002 the Oktoberfest Committee learned through Jim Hill’s contacts in the German-American community that the Washington Saengerbund was vacating their facilities in Upper Marleboro, Maryland, where they had hosted their own Oktoberfest for many years. We contacted the Saengerbund and described our intentions of expanding and making the Oktoberfest more authentic in Lovettsville. The result was an immediate and generous offer to help. Within weeks of the first meeting the Saengerbund members had loaded and unloaded three Penske rental truckloads with much of their investment in kitchen equipment, furniture, sound equipment and decorations, which involved six roundtrips from Upper Marleboro to Lovettsville.

For the 2003 Oktoberfest and our then $3000-$4000 budget, the Saengerbund’s windfall generosity enabled us to afford a large tent with dance floor and stage and to have a large seating capacity under canvas as well as immediately outside the tent.

We were able to finally engage the Alte Kameraden band of Fairfax, undoubtedly the best and most authentic German band this side of the Atlantic, which has become a Lovettsville Oktoberfest tradition. Members of the Washington Saengerbund, Herbert and Carol Traxler who are also impresarios of the Alpine Dancers, have also become part of our Fest tradition. The Alpine Dancers perform the beautiful and intricate folk dances of Germany, Austria and Switzerland. They turn spectators into participants, bringing young and old on to the dance floor as part of the main tent entertainment. We were also able to afford and entice local and contemporary bands to expand our repertoire. Oktoberfest enthusiasm gripped our local restauranteurs as well, who expanded their operations to the out of doors and included their own entertainers and live music. Oktoberfest has become a community-building catalyst.

Lovettsville’s Oktoberfest has expanded every year since 1994 and has become one of the most authentic and family-oriented events in the region. From an expected 1000 visitors when we began we now expect over 10,000. We offer entertainment and activities for all ages. Our Fest combines a little bit of Germany and a lot of country Virginia.  Planned for months in advance and set up by volunteers, young and old, in a week, the Lovettsville Oktoberfest is true to its heritage, true to hard-working people living in a good and pleasant land. If you are visiting, welcome to be with us. If you live here or have just moved here, welcome, join and become part of German Settlement heritage.