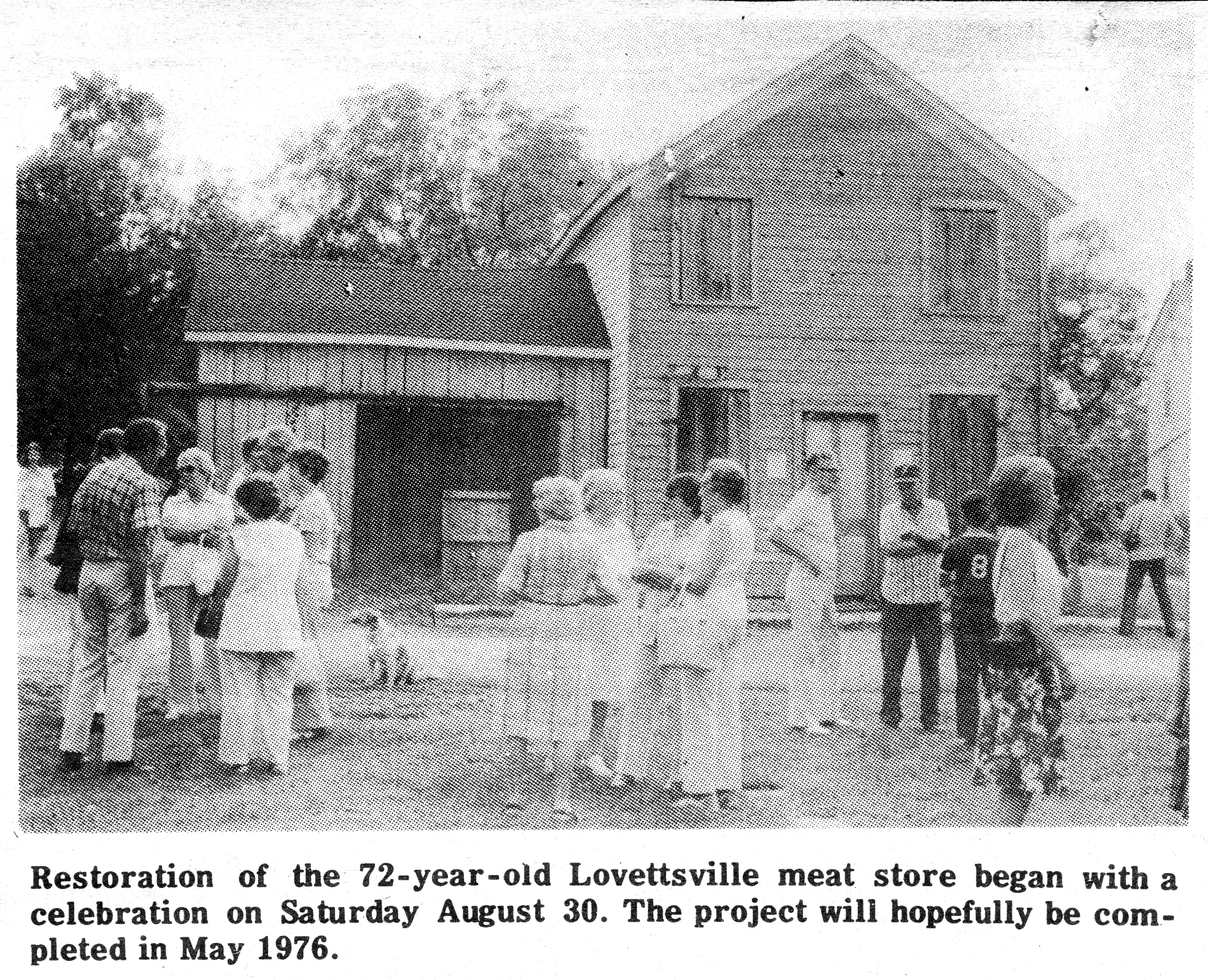 “The Lovettsville Butcher Shop Complex As I Knew It,” by Glenn L. Grove (1991) 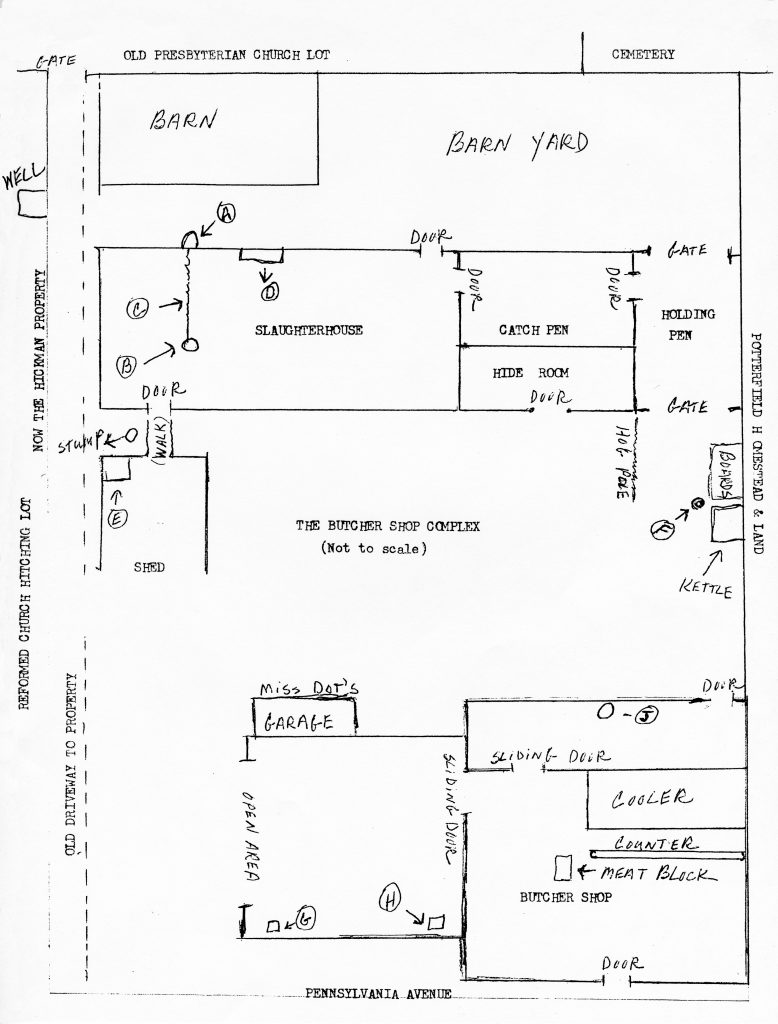 The museum housed in the old butcher shop is a great asset to the town of Lovettsville. However most of the buildings are gone and probably no photos of the property in its original form exist. It was built on the same concept as most of the old slaughtering establishments of its day. It was set up as a two person operation and most of the work could be done by an individual.

The old entry road was several feet to the left of the present one. It ran parallel with the well on the adjoining property now owned by the Hickmans. A gate at the end entered the Presbyterian church lot that was later sold and became part of the Willard Hall property. It bordered on the right by the Potterfield Homestead that was occupied by Misses Molly and Laura Potterfield. A solid board fence dividing the property and between the buildings around as far as the slaughterhouse.

The old barn with a hay mow was approximately 25 feet by 40 feet. It stood on the rear of the property across from the well. The water from the well in my time was only used to water livestock, washing up the slaughterhouse floor, and for scalding hogs. Palatable water was secured from the well across the street on the Sue Hickman property. There was a roomy barnyard with an entry gate near the well.  The circle (A) in the barnyard was a catch basin for blood and water from the slaughterhouse. It probably held about five gallons and paid a salary of ten cents for dipping and dumping in the field in the rear.

The slaughterhouse building was divided into three sections. There was a hide room to the right front of the building. It had a door to the front and hides were salted and stored until a buyer came by from A.F. Rees & Sons to purchase them. The right rear section was known as the “catch pen”. Cattle entered by either gate into the holding pen and then through the door of the catch pen. Both inside and outside doors of this pen were secured by a 2 x 4 crossbar. Another small trap door above the inside door could be raised, and by standing on a wooden box a person could rope the animal in the pen. This large rope probably an inch and a half thick was then put through a ring in the floor and around an old tree stump about six feet tall outside the slaughterhouse door. The crossbar would be removed from the door and the animal pulled to the ring in the floor (B).  The animal was rendered unconscious with a blow from a sledgehammer, the rope removed, and the blood drained into the trough in the cement floor (C).  As the skinning progressed the carcass was raised by a wooden windlass located along the wall (D).  The windlass was operated by a piece of board put in notches. This was a home crafted device and it is a shame it was destroyed. The carcass was quartered and removed to the butcher shop for cooling.

An all purpose shed stood about ten feet from the slaughterhouse. In the far left corner was a kettle (E) Used for rendering tallow. It also housed a tallow press and a Model T Ford truck used to bring in calves and hogs for slaughter.

Along the right fence was a large round kettle holding approximately 90 gallons of water. It was mounted in a brick fireplace and used for scalding hogs. They were killed in the holding pen and dragged to the scalding area. They were raised and dipped, half a hog at a time, by a long pole placed on top of a post (F).  It rested on a homemade iron swivel. A rope was attached to the end of the pole and the hog was raised in lowered into the water, scraped on the boards next to the kettle and gamboled and placed on the pole by the same device. Again it must be remembered that this was a two-man operation and equipment in use had to conform to the manpower.

Last but not least we come to the building we can still see it and are familiar with. Even some alterations have been made to this building. On the left side and to the rear was a closed section which was Miss Dot’s garage. The front left section was an open section. The meat grinder was located at (G) and the gasoline motor to power it was at (H). There was not electricity in any portion of this property at that time.

The right portion of the building was also divided into two sections. The rear room contain the cooking kettle for making liver pudding (J).  The furnace for this kettle worked from the existing chimney. In the front area the beef was hung at times, especially in cold weather, along the left wall, veal from the ring is still visible in the ceiling.

The ice cooled box was located on the right wall. Ice for this refrigerator was purchased from Taylor Brothers ice Company in Brunswick. Ice was delivered to Lovettsville on Tuesday, Thursday and Saturday. It came in 300 pound pieces and was lifted to the top of the box by a hand cranked wooden windlass. A pipe through the right wall drained the water from the melted ice. The windlass was stored in the open part of the building along the wall opposite the grinding equipment.

Monday and Thursday were usually, but not necessarily, regular slaughtering days. Fridays were mainly cut up day and cooking and grinding with done for the Saturday house-to-house delivery in Brunswick.