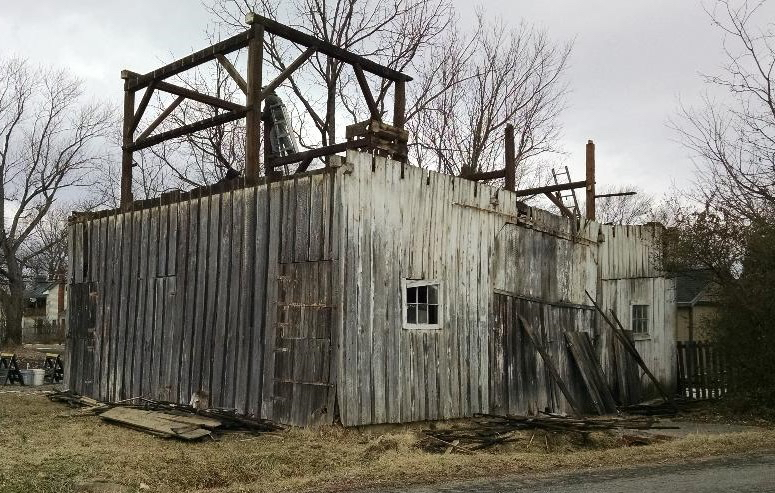 What Was That Building On Lovettsville’s Locust Street? (2018)

by Edward Spannaus
Lovettsville Historical Society Board Member and Researcher

The greyish, barn-like building on South Locust Street, Lovettsville, Virginia, recently taken down, is believed by most local historians to have once been the Nicewarner blacksmith shop, which ceased operation in 1934. It has also been known the “wheelwright shop.”  It has not been used for anything except storage for many decades.Lovettsville historian Glenn Grove, who died last year at the age of 93, wrote in his paper “Hidden Monuments of Lovettsville Past” about the Lovettsville Motor Company, a Chevrolet dealership located on South Loudoun Street.

“However, to the rear of this building [the dealership] and still standing is the old barn type building that housed the Nicewarner blacksmith shop.  It was operated by Mr. Henry Nicewarner, assisted by his son Lester at times, and later by Alex Overton.  It was an interesting place for a young boy to spend his time.  It was also a good place to burn bare feet, but a chance to crank the bellows made that risk worth taking.  When the elder Nicewarner died in 1934 the shop was closed and a sale held to dispose of tools.”

The building itself was not real old by Lovettsville standards, judging from its construction; it was probably built in the 1890s or the early 1900s.

The entire triangular block bounded by Pennsylvania Avenue, South Loudoun Street, and Locust Street, in the mid-19th century consisted of only two parcels: A smaller rectangular parcel shown as “John F. Smith” on the 1875 town map at the corner of Pennsylvania and Loudoun – that became the marble or tombstone shop – and a second parcel extending from Pennsylvania Avenue to the point at the intersection of Loudoun and Locust.

Around 1869-1870 a smaller triangular parcel at the point was acquired by the Lovettsville School District, which owned it until selling it 1905 to Charles F. Schumaker.  On this site was the first Lovettsville “colored” school building, which has since been converted into a dwelling house.  The old stone building just north of the schoolhouse building was the town jail, according to local legend.

Lester Nicewarner acquired the old school lot and a surrounding parcel in the 1920s.  After Henry Nicewarner’s death it went to Ridgely Albaugh and his wife Edna George Albaugh in 1935;  Ridgely and Paul Albaugh operated the auto dealership on the Loudoun Street side of the property.  In 1953 ownership was transferred to Ridgely’s father-in-law S. Henry George, and then it descended to Eliza George Myers (another daughter of S. Henry George) and her husband Robert A. Myers – both educators in local public schools.  It is now owned by Tim Keena, a nephew of Eliza Myers, who is planning to build two more houses on that land, along with two dozen or more houses on the other side of Locust Street over to Frye Court.
——————————

Join us and support our mission to preserve local history. https://squareup.com/store/lovettsville-museum/