What we are losing, by demolishing the Community Center building

Many long-time Lovettsville residents spent uncounted hours playing baseball in the ball field behind the Community Center, formerly the Lovettsville School. For years, a plaque stood above the ball field, dedicating the field to Jasper Rickard, the beloved baseball coach who died of a heart attack while coaching in 1981.

At a meeting in 2014, his son John Rickard described Lovettsville as “a baseball town,” and he told how his father died on the ball field. Mr. Rickard warned that demolishing the ball field would amount to “desecrating sacred land.”

This is but one part of the erasing of local history by Loudoun County’s planned demolition of the Lovettsville Community Center building. The core of that building is the old Lovettsville High School and Elementary School, including relatively-intact classrooms which date from the 1927-1940 period.

Many members of the community attended school in those classrooms and sought their preservation, but their concerns were disregarded. During the 2014 controversy over the demolition of the School/Community Center, many citizens recalled their fond memories of the old school, and fervently asked the County to consider alternatives to demolition – which included renovation of the existing building, or constructing a new Community Center across the street on the Lovettsville Community Park site.

Among the most prominent advocates of the latter, was former Mayor Elaine Walker, who was Mayor when the Town and the County combined forces to purchase the land for the Community Park.  Mayor Walker was also instrumental in the “Pennies for the Park” campaign to raise money for the development of the Park site. She told County officials that we should save our historic buildings, not demolish them, and she pointed out that to build a new Community Center across the street was only a distance of 500 feet.

Another advocate for saving the Community Center and the old school rooms was former teacher (1954-55) Katherine Womeldorf Paterson, author of the popular book (and movie) Bridge to Terabithia and winner of a number of prestigious book awards.  Mrs. Paterson wrote a letter describing how she had come back and visited both the old school (the Community Center), and the new elementary school. “I just wanted to add my vote to those who wish to preserve a building that has meant so much to so many people over the years,” she wrote.

A brief history of the Lovettsville School 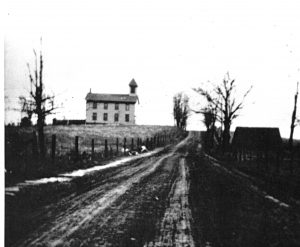 Land was first obtained by the County for a school on this site in 1866. The frame school building (pictured at left) was later enlarged to four rooms, and by 1910 it included a high school. The old frame school building was replaced in 1927 by a one-story brick structure with two classrooms.  In 1937, four more classrooms were added, with the expansion being completed by 1940.  These six rooms still constitute the core of the present building.

In 1974 the County opened the new Lovettsville Elementary School on South Loudoun Street, and the old building on East Broad Way was turned into a Community Center. In 1976 a fire destroyed the front portion of the building, and a new facade was built which significantly changed the outside appearance of the building.

However, the old classrooms are still there, and some remain more-or-less intact with original materials. Although this was never acknowledged by the County during the public hearing process, a diligent community researcher obtained evidence that County officials had this information in their possession.  This documentation included a March 2012 “Lovettsville Community Center Conditions Assessment Report,” which described each of the six classrooms.  For example, the report stated that Classroom 2 “is one of the original classrooms with plaster walls and ceiling, and maple flooring. Plaster is in generally good condition … The maple floor is in very good shape for its age.”  Classroom 5’s assessment said the plaster is in good condition, and the maple floor “is in very good condition for its age.” Some of the rooms are described as in need of some repair, but all six appear to contain elements of the original construction.  It is believed that the original wainscoting is also still present in some of the rooms.

County violates its own policies

There is no evidence that any of this was ever taken into account during the original planning and design process. Nor was it ever brought to the attention of County Planning Department, which is responsible for historic preservation, until after the issue had been raised during public hearings.

This was despite the fact that, for any building more than 50 years old, official County policy requires an evaluation by qualified County staff of the historic significance of such a structure. The County’s Comprehensive Plan which was in effect at the time, placed a strong emphasis on historical preservation, and called for preservation of historic structures in their historic settings.

The Board of Supervisors also adopted a “Heritage Preservation Plan” in 2003. That Plan included policies regarding a “stewardship program” for County-owned properties, under which the County should identify and make every effort to preserve historic properties.

After the fact, one excuse raised by proponents of the County plan, was that the classroom/community center building had been determined to be “non-contributing” – because of changes in its outer appearance —  in the Historic District survey conducted by architectural historians in 2010. This was part of the creation of the Lovettsville Historic District for the National Register of Historic Places; the Historical District itself includes the Community Center property and beyond.   That determination was made solely on the basis of viewing the exterior of the building.  Their mandate did not include inspecting the building’s interior, including the historic classrooms, nor were they even authorized to look inside.

In fact, the whole process by which the County made the decision to demolish the Community Center has been called a “bait-and-switch” operation.

In November 2007, there was a bond issue referendum on the ballot to authorize the County to issue bonds to finance the “renovation” of five community centers in the county, including Lovettsville. The vote in the two Lovettsville precincts was 947 “yes” and 713 “no” – a clear majority voting for renovation. For the next four years, nothing was done concerning Lovettsville, while other community centers (such as Lucketts and Bluemont) were being renovated.

In 2011, the County hired an architectural firm to produce a “Facility Assessment Survey” of the Lovettsville Community Center. The firm produced a report containing two options for renovation, and a third, more expensive, option for demolition and new construction.  County officials and staff – as is usual – favored demolition and new construction, as opposed to renovation and preservation of the present Community Center.

In order to obtain public support for the shift from renovation to demolition, a “public input” meeting was held on Nov. 29, 2012, organized by County officials and the Community Center staff, at which parents were told that pre-school and Day Care programs would have to be curtailed if the renovation option were selected, and their children might be stuffed into classroom trailers. Not surprisingly, all 18 persons who filled out the County-prepared “feedback” questionnaire favored the new construction option.  (As many as one-half of the signers were either Town or County employees or officials.)

This informal and rigged “feedback” was then deemed sufficient to override the votes of over 900 citizens who had voted for renovation of the Community Center.

The original schedule, as outlined by County officials at the November 2012 meeting, was for ground-breaking in the Spring of 2014, with the project to be completed by the end of 2015.

When Mayor Walker asked about locating a new Community Center in the Park across the street, a County official replied: “Oh, Mayor Walker, that would add two more years to this project!”

And, now the project is just getting underway, almost five years after the original completion date.

Not mentioned at the time by County officials was the very real danger created by having young children attending programs in the middle of an active construction site. This issue was raised by the Lovettsville Historical Society, the Lovettsville Alumni Association, and others during public hearings in 2014.

It now turns out that a major reason for the delay in the bidding and awarding of the construction contract was the safety issue. Construction companies could not bid within the County’s budget limits for a project which involved such complex issues of ensuring the safety of children while construction is going on all around the facility. This was also a significant factor in the cost escalating from $2 million at the beginning, to $10.8 million — the price tag on the contract awarded to Meridian Construction on May 30, 2019.

County officials admitted as much in a report submitted to the Board of Supervisors on May 14, 2019, which stated: “The difficult phasing of the work around the ongoing operation of the current facility has contributed to the higher than normal cost.”

The fiasco around the Lovettsville Community Center is one more example of why many Loudoun County citizens will tell you, that when it comes to historic preservation, the County government itself is the worst offender.

We close with excerpts of a letter written in 2014 to the president of the Lovettsville Alumni Association, Fred Lee George III, by an alumnus of the old Lovettsville School. The letter stated:

It was with a heavy heart that I received your email … concerning the plans to demolish the old Lovettsville School building.  Even though fire damaged the old school years ago, it still has several rooms left that contain many memories for many people.

To me, having lived a major portion of my life some 50 years in Lovettsville, the school is like a monument that is symbolic of the old ways in Lovettsville. In defense of keeping the school, I would like to point out the following:

–Gone is the old Bernard Spring’s store that existed back in the ‘30s and was a kid’s delight for penny candy.

–Gone is the Lovettsville Motor Company that was a Chevrolet dealership operated by Paul Albaugh. It used to be located directly across the road [S. Loudoun St.] from former Councilman William Brown’s residence.

–Gone is the original McClain’s Grocery Store. It was operated by Charles Spring before that, and at some point the Cost family. Miss Mable Wire was a clerk in this story for many years.

–Gone is the Myers Harness and Shoe Shop [on East Broad Way] once operated by Mr. Edward Myers.

And the list goes on and on…. We can cannot continue to erase the old ways, the old memories of our heritage. What we are today is built on from our past. This is how Lovettsville came to be,  and will be in the future. We must hold on to the structures and values of what the town has been built on.

Let me point out that while structures are substances of stone, or brass, or marble, people can also be monuments living in the hearts of generations that succeed them. Many of the people I mentioned played a major role in making Lovettsville the wonderful and great place it is today.

So many wonderful people like Miss Laura Potterfield, Richard Hickman, Elaine Walker, just to name a few of the greats, have made our town foundation strong and enduring. We must remember them and keep intact our buildings that are rich in the town’s heritage. Let us share these monuments with future generations.