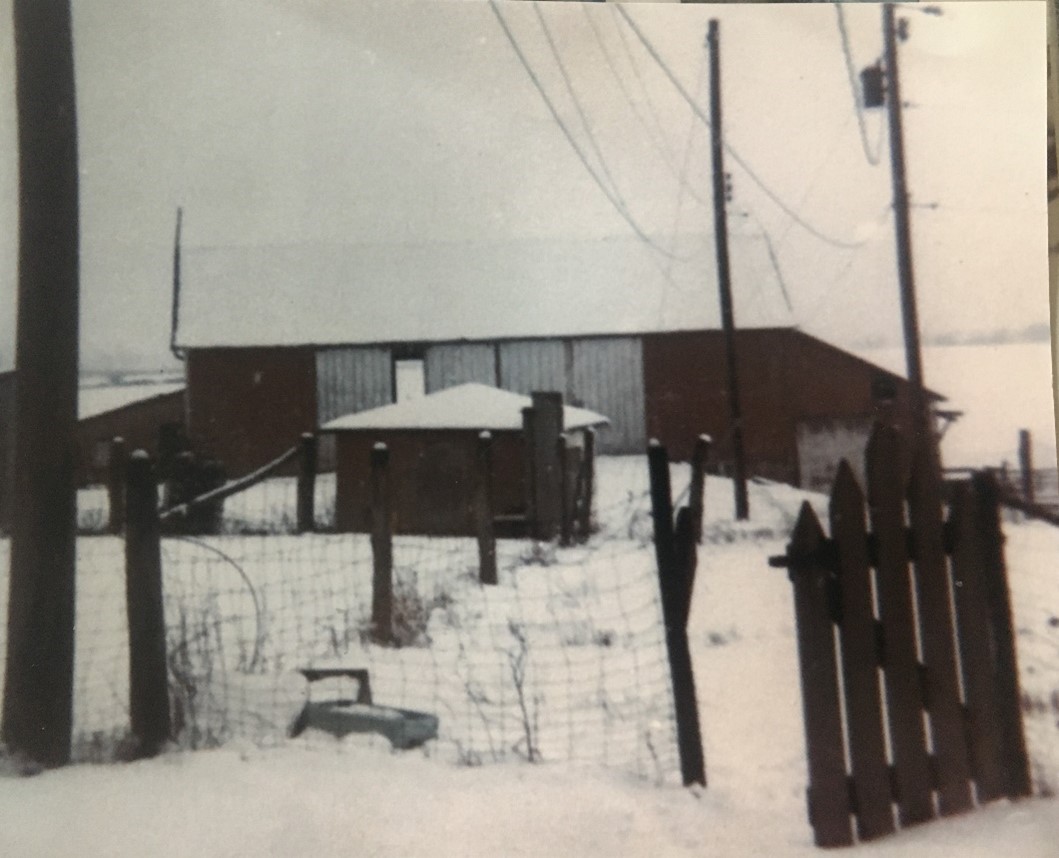 “A Most Excellent Barn:” A Pennsylvania German Barn in Lovettsville

In reviewing the research in Lori Kimball’s article on the Ruse-Seitz barn, and comparing the barn to the Ruse log house (built around 1876) which we covered in our January and February issues, we were reminded of what was often said about the Pennsylvania Germans: that their barns were built bigger and better than their homes – and some would say, mockingly, that they took better care of their animals than of their families. That may be an exaggeration, but their barns had no parallel.

The same thing was true here, in the German Settlement. In Loudoun, critics such as Yardley Taylor noted that the Germans were living far below their means, writing that “Many old log houses that are barely tolerable are in use by persons abundantly able to build better ones.” This was in 1853, when the Germans here were already at least third generation. But they were building large and substantial barns.

What was it about those Pennsylvania – and Maryland and Virginia – Germans and their barns?

The Pennsylvania “bank barn” – with variants known as the “Swiss” or “Switzer” barn — is regarded as one of the most important, distinctive types of barns built in North America in the 18th and 19th centuries. It was characterized by being built into the side of a hill or a rising, with the ground floor, which housed cattle and farms animals, opening to barnyard on the south where the sun warmed the animals in winter. There were often rooms next to the embankment on the ground floor used for storage of vegetables, particularly root vegetables. The second floor, accessed from the higher ground on the north side, often featured an overhanging “forebay” or “overshoot” on the south side, and its unbroken floor space was used for threshing, storage of hay and flour, and even for farm chores such as spinning in the summer months.

The heyday of the Pennsylvania-German bank barn was in the late 18th and early 19th centuries, but they continued to be built into the late 19th and even early 20th centuries.

We had a fine example of the Pennsylvania forebay barn close by, in the Ruse bank barn: a magnificent structure which was built in the 1880s. It was constructed in the traditional manner, even with the second floor, the hay lofts, facing more-or-less north, and the barnyard on the lower level, facing south. Not to mention the size.

We had a fine example of the Pennsylvania forebay barn close by, in the Ruse bank barn: a magnificent structure which was built in the 1880s. It was constructed in the traditional manner, even with the second floor, the hay lofts, facing more-or-less north, and the barnyard on the lower level, facing south. Not to mention the size.

And it also seems to have been built with first-rate materials. Two examples are revealed in the records of the Chancery Case cited by Lori Kimball: (1) lumber which was shipped from the prominent Wheatley Bros. firm in Georgetown, D.C. – when, one would assume, that there was still plenty of lumber available locally; and (2) a slate roof by A.N. Hartman of Frederick, who put slate roofs on hotels and homes all over the area, as far as Baltimore.

Even though the barn no longer exists, we are fortunate to have so much detailed information about its construction, which Lori Kimball discusses in the feature article that follows. We also present, separately, a profile of the Seitz family, which was related by marriage to the Ruse family.

“A Most Excellent Barn”

There is a lot going on at the county park site since the articles about the Ruse/Reed farm and historic farmhouse were published in our January and February newsletters.  The ballfields are taking shape, and towering lights were installed in early summer.  Earth movement in the passive area of the park that contains the historic buildings.  When that section of the park opens to the public, the stone foundation of a former barn will be visible to the west of the former house and extant smokehouse and stand-alone kitchen.  The barn burned during the 1970s or 1980s, and what we know of its early history comes from historical records in the archives at the Loudoun County Courthouse.[1]

The Ruse family owned a 185-acre farm in the 1800s on which the current park is being built.  Over time the farm was divided into tracts for family members, one of which was a 60-acre parcel owned by Emanuel Ruse.  It was during his ownership in the last quarter of the 1800s that the former farmhouse was built on the northern side of today’s park site.  Emanuel also owned a lot in the town of Lovettsville where he operated a carpentry shop, and he lived there at the time of his death in 1891.  His daughter Anna and her husband Winfield S. Seitz lived and worked on the 60-acre farm property.  During the mid- to late-1880s, Seitz and Emanuel Ruse built a large barn to the west of the house.

The Ruse family had a long history in Lovettsville dating back to the late 1760s.  The Seitz family, of German and Swiss ancestry, settled in the area by at least 1843.  There are conflicting records for the location of Winfield’s birth – one lists it as Lovettsville and another as Morgan, West Virginia – but he was baptized at the Reformed Church in Lovettsville on 23 March 1851.[2]

Information about the barn’s construction and style was learned in a round-about way through a legal case that was filed in 1892 by Joseph Ruse against his brother Emanuel’s estate.  Joseph claimed that Emanuel owed him $1,379.20 plus interest for the financial support of their mother.  In the analysis of Emanuel’s finances and the value of his real estate, the cost of constructing the barn was documented in detail.

Most of the depositions in the case were taken in August 1892.  Local blacksmith, George Wire, was 63 years old at the time of his testimony and said he knew the Ruse family for about 55 years.  Wire described the barn as a bank barn [made of] stone and frame.  It was not “extra large, but a splendid little barn.”[3]

Joseph C. Baker was a 69 year-old stone mason living near Lovettsville when he gave his deposition.[4]  He was hired by Seitz to do the stone masonry work for the “basement of a barn 40 or 44 feet long, 32 or 33 feet wide.”  The stones for the barn had been hauled to the location before Baker started his work, and he estimated that 100 perch of rock was used.  He was paid 40 cents per perch for a total of $40.00.  Seitz bought 75 or 80 bushels of lime to make the mortar.

Baker and other workers, such as foreman John Loy, boarded at the farm while they were building the barn.  Baker estimated he lived there for 3 weeks.  Loy, who was a 53-year-old carpenter living near Taylorstown at the time of his deposition, said he “got my grub at day rate.”  He was the foreman of the carpenters and paid $75 for his work.  He didn’t quite finish the job and testified that Seitz and “Old Mr. Ruse” completed it.  He also described the labor contributions of Seitz, saying he hauled the rocks, lumber, lime, and sand.

George T. Cooper was another contractor who worked on the barn project.  He was a 56-year-old farmer living near Bolington when he gave his deposition in the case.  He provided the framing lumber for the barn and was paid $129.

Seitz and Ruse purchased the lumber to side the barn from the Wheatly Brothers Lumber company in Georgetown.  The well-known and respected business was founded in 1845 by Francis Wheatley.  He ran it until 1866 when his sons, Samuel, Charles, and William, took over.  They expanded to two locations – K Street NW and 7th & Rhode Island Avenue – and owned four acres of lumber yards on the Georgetown wharf.[5] 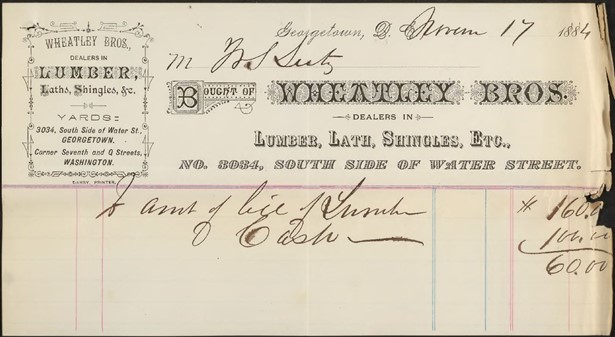 The lumber was transported by boat as shown on the bill below.  The last item is for the use of “Jordan’s boat.”  Jordan might have been John L. Jordan, a flour dealer in Berlin (Brunswick) who was a “large shipper” on the C&O Canal.[6] 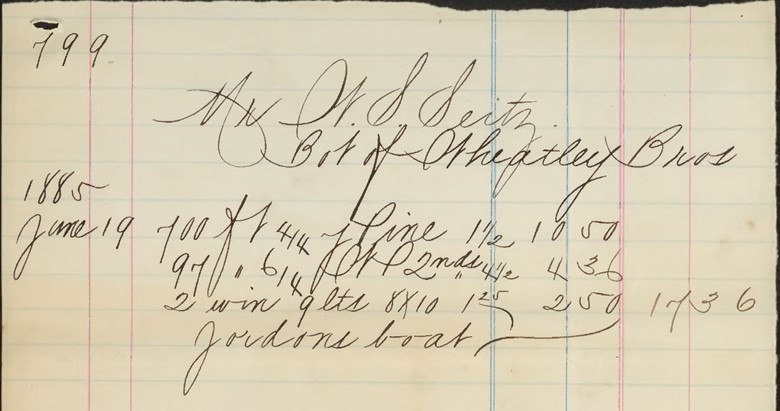 A.N. Hartman roofed the barn with slate shingles.  Shipping bills, as shown below, indicate the slate was transported to Berlin (now Brunswick) by train.  Hartman was a well-known and popular slate roofer based in Frederick, Maryland.  He did roofs for hotels, homes, and other structures throughout the area and as far away as Baltimore, according to contemporary newspaper accounts.  The firm was previously known as Jones & Hartman, but the partnership was dissolved in February 1885 and Nicholas Hartman continued the business.[7] 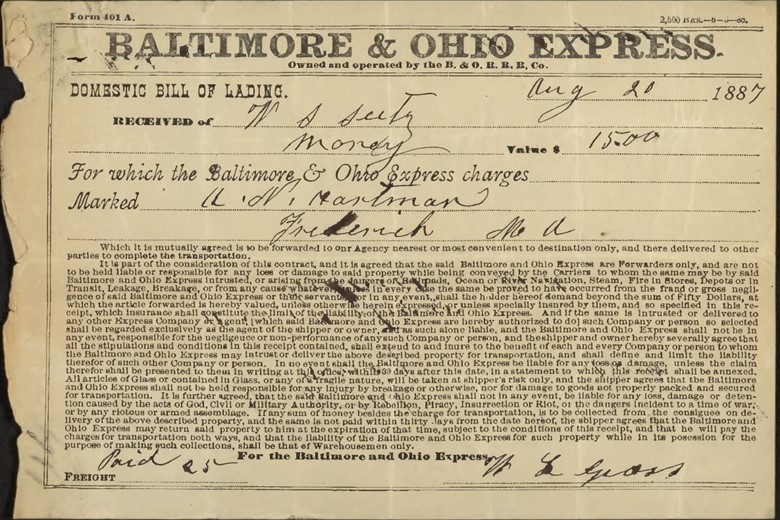 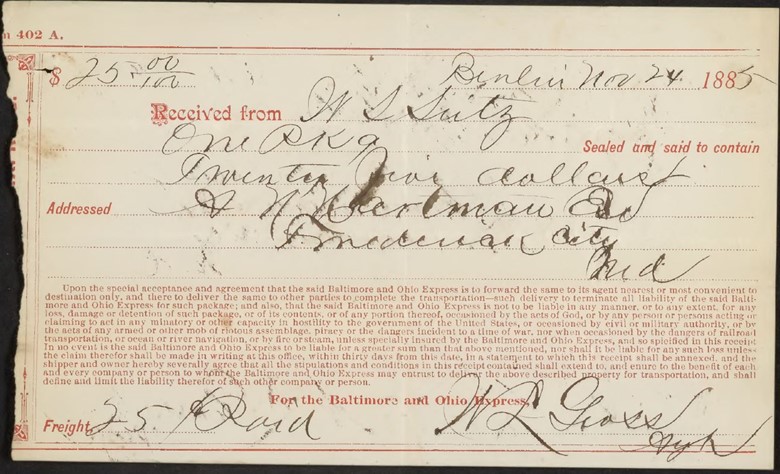 During the early years of the lawsuit, Emanuel’s lands had to be sold to pay the debts in his estate.  The farm and other properties were sold in 1893.   This advertisement ran in The Mirror newspaper and described the farm as “fine arable land, near Lovettsville, well improved, good fencing, a fine Young Orchard, Comfortable DWELLING and Outbuildings, together with a most excellent BARN (Switzer style) with slate roof, and new modern conveniences for food and stock.”  The 60-acre farm was purchased by John L. and Mary E. Smith for $64.25 per acre.  C.W. Fry bought the house and lot in town for $757, and C.M. Hammond was the purchaser of the 11-acre parcel.  Charles W. Johnson, a local farmer and businessman who was active in politics, bought the 5-acre wood lot on the mountain.[8]

The Switzer style barn referred to in the advertisement is also called a German barn or Pennsylvania barn.  The structures have a stone foundation and an overhang on one of the long sides.  They are often built into a natural or manmade earthen bank for access at an upper level.[9]  The Ruse/Seitz barn was a bank barn as shown on the northern façade in the image above.  It is assumed that there was a projecting forebay on the southern side.  The style would have been well-known to Ruse and his son-in-law from their connections to the German communities in Pennsylvania and Maryland and the similar barns built in the Lovettsville area.

Ruse and Seitz were not wealthy men, but they used high quality materials to build the barn.  Wood was purchased and transported from an established lumber business in Georgetown.  Slate roof shingles would last much longer than wooden, but they were more expensive.  Barns, of course, are necessary and important structures on a farm and that is evident of the Pennsylvania-German bank barn built by Ruse and Seitz.  It stood for approximately 100 years until it was destroyed by vandalism.  Although the barn no longer stands, visitors to the park will still be able to see the stone foundation remains of this once “most excellent barn.”

[2] Unpublished research by Edward Spannaus on the Seitz family.

[3] George Wire’s property was at the east end of East Broad Way, near the Ruse farm.  Unpublished research by Edward Spannaus of local names in Chancer Case 1908-015.

[4] Baker was probably a member of the Baker families who lived in Morrisonville.  The 1880 Census listed two Joseph C. Bakers, age 56 and age 21, both stone masons. Ibid.

[8] Johnson was featured in an article in our December 2020 newsletter:  http://www.lovettsvillehistoricalsociety.org/index.php/charles-w-johnson-the-spy-who-walked-a-crooked-line/