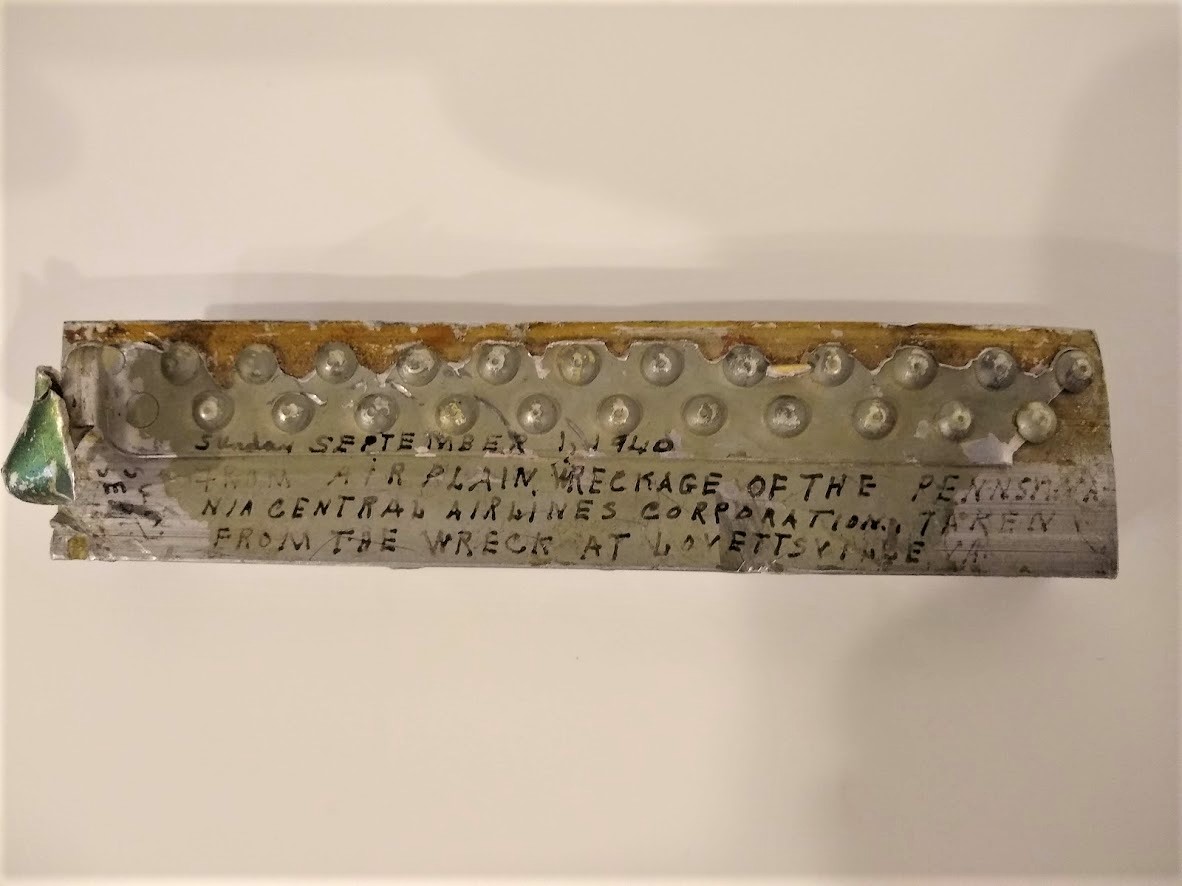 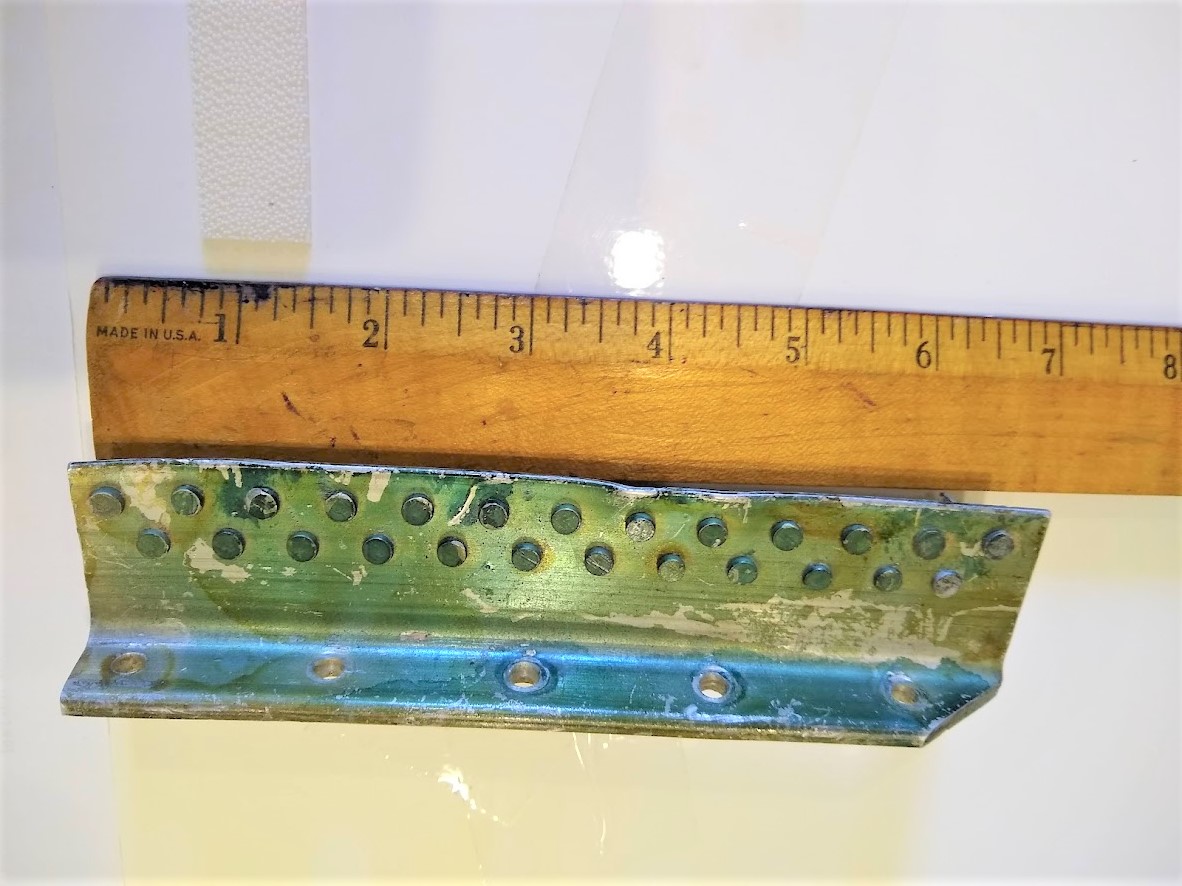 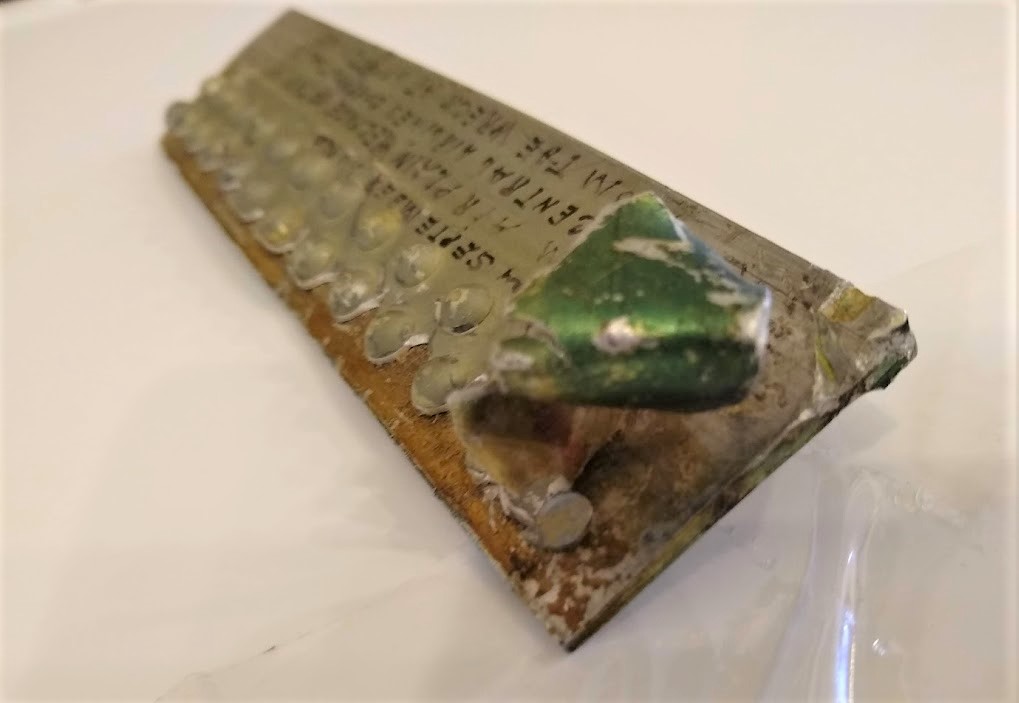 A piece of machined metal from the August 31, 1940 airplane crash near Lovettsville has been donated to the Lovettsville Museum by Robert Zirkle and Carol Sue Zirkle of Shenandoah, Virginia. The item was part of the estate of Robert’s aunt, Ruth Righter, who died in 2018 – who had never lived in or even visited this area as far as Mr. Zirkle knows.

Handwritten on the metal piece is the following: “Sunday September 1, 1940, From Air Plain Wreckage Of The Pennsylvania Central Airlines Corporation. Taken From The Wreck At Lovettsville Va.”

How did this come into Mrs. Righter’s possession? Mr. Zirkle has no idea. “The piece of metal we donated to the museum was a mystery when I found it in my Aunt’s Estate, which I inherited in 2018,” Mr. Zirkle explained. “I found the piece of metal in the back of a bedroom dresser drawer. For the 69 years that I knew my aunt, this piece of metal was never spoken of to my knowledge. My aunt was born in 1924, making her 16 years old when the accident happened. I find it very hard to believe she would have traveled 120 miles to see the remains of the crash site. Especially when the piece was picked up the day after the crash.”

Mr. Zirkle added that he probably have discarded it, had not been for what was written on it. But, other than what is written on it, he has no other indication of its origin. than this. “We truly believe it came from Lovettsville, and it needed to go back to the Lovettsville Museum,” Mr. Zirkle stated.

The Lovettsville Historical Society thanks the Zirkles for this donation. For more on the story of the 1940 crash, see the documentary video shown as part of the LHS Lecture series in 2016, and other news articles and reports on our website.