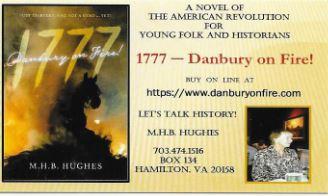 Presented by M. H. B. Hughes
at the Lovettsville Museum
Saturday, May 11, at 3:00 – 5:00 p.m.
M.H.B. Hughes says that her new book 1777 – Danbury on Fire! (Gatekeeper Press Nov. 2018) is for “children, ‘tweens and historians,” but writers and amateur genealogists may find equal inspiration. Although marketed for young folk, Hughes says that 80% of the books purchased through her are for older adults.

The protagonist, 13-year-old Joe Hamilton, tries to decipher which part of his family is crazy — his pacifist parents or every single other family member, all small-town Patriot movers and shakers. Soon enough Joe discovers that the British are indeed coming, on a short and shocking mission against the Patriot commissary. The British that Joe encounters all act willing to give a boy a break … except one, who is a little too familiar. Swirling smoke suffices to let all comers commit crimes.

1777 gives a clear view of the neighbor-against-neighbor grassroots world of the 1700s, where most of the population dread shattering America’s new prosperity. Young readers follow Joe’s peregrinations through a besieged town, while adults see the family implications and how extortion, lies, and moral suasion prove more effective than firearms when utilized to divide and conquer.

Snips seeded throughout the text are outtakes from old letters and documents, proving the truth of the plot’s odd twists. Included are a bibliography and what happened to the characters after the war.

“All adults in the book are real people,” says Hughes, “mostly related to the me.”

As a former defense contractor, Hughes felt impressed by the difference between her ancestors’ war and the MRAP (Mine Resistant Ambush Protected) vehicles that formed her work focus. Even her father’s military career revolved around the horse in WWI. (For the horse-lover, plenty of equines gallop through the book.)

Hughes will intersperse reading with discussion about research and the author life. It took seven years for Hughes to complete her book, doing much of the planning while commuting 3-4 hours per day. She states that she “never felt disturbed by the length of time.”

She invites you to join her for wine and cheese after the presentation.