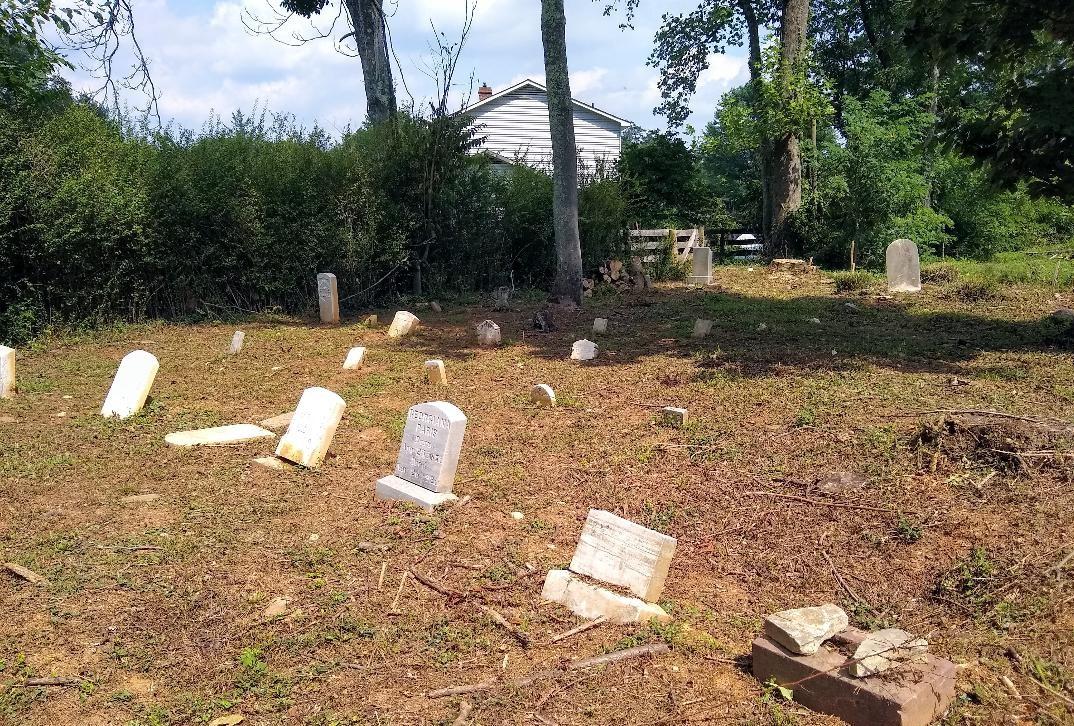 County Supervisors to take up preservation of Mount Sinai Cemetery

Over a year after the Lovettsville Historical Society began its drive to draw public attention to the plight of the abandoned African-American cemetery on Mountain Road known as the Mount Sinai Cemetery, the Loudoun County Board of Supervisors will take up the issue of preserving the cemetery at its November 3 business meeting, which begins at 5:00 p.m.

This represents a significant victory in our drive to restore and protect this abused and neglected burial ground in the “Little Britain” community.  The church property, on which there may be as many as 100 burials, has been owned privately for the past 60 years.

What is called a “Board Member Initiative” is on the agenda for the Nov. 3 meeting, presented jointly by Phyllis Randall, the Chair of the Board of Supervisors, and Caleb Kershner, the Catoctin District Supervisor.  The initiative asks the Board to have County staff look into options for either acquiring the cemetery property, or to take other measures to preserve and protect the historic property.

The Initiative states in the “Background” section:

The Mount Sinai Free Will Baptist Church was dedicated in 1887 when the first documented burial took place with burials continuing through 1955. The church served the African American community of Little Britain through the early part of the 20th century (1920s). The church had services on Sundays and held school during the week. At one time, it was the focal point of the community of farmers, laborers, and domestic workers who came to services on Sundays to hear the word of God and for fellowship with their neighbors. The church building burned in 1980 but the old foundation remains….

The cemetery and church property has been abandoned for several years and is currently owned by William and Mary Helms. The owners have not maintained the property which is overgrown with weeds.

The Family and Friends group, working with the Lovettsville Historical Society, have located about twelve grave markers, and documented 29 burials. They would like to work with the County archeologist to survey the property using Ground Penetrating Radar to discover others buried at the cemetery. This research would help document the history of the sacred ground.

The initiative grew out of a September 7 meeting between representatives of the Family & Friends of Mount Sinai Cemetery, and Chair Randall, and with staff from her office and from the office of Supervisor Kershner. At that meeting, Chair Randall discussed the resources that the County could bring to bear on the efforts to preserve the cemetery and to right the wrongs which were committed in the past. This would include working with the County Archeologist and using Ground Penetrating Radar to attempt to determine additional burials beyond those already known.

At the September meeting, Chair Randall asked her staff to work with Kershner’s staff to draft the Board Member Initiative. The draft is now complete, and includes a lengthy “Statement of Facts” which recounts the history of the Mount Sinai Church and Cemetery, and the efforts made by the Lovettsville Historical Society and the Family & Friends group to obtain access to the cemetery property for purposes of clearing the weeds and overgrowth so that restoration and preservation could begin.  Those efforts last Spring were only partially successful, and the church property is now once again overgrown with brush and weeds.

To read the full document, go to Board of Supervisors webpage and then go the page for Meeting Documents. https://www.loudoun.gov/3426/Board-of-Supervisors-Meetings-Packets. From the Meeting Packets page, click on “2021” and the 11-03-21 Business Meeting.  Then click on Item 08 Mount Sinai Cemetery and Church.pdf
The Board meeting is open to the public, and anyone can sign up to speak in the public comment section.  You can also send a message to the entire Board supporting the Mount Sinai Cemetery Initiative — the link is on their page Board of Supervisors | Loudoun County, VA – Official Website