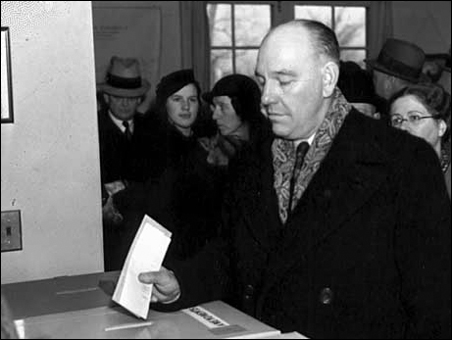 Death of Senator from Minnesota Still Shrouded in Mystery (2009)

That dubious distinction belongs to Ernest P. Lundeen, who was killed along with 24 other people 69 years ago this week — on Aug. 3l, 1940 — when his commercial airliner plunged into an alfalfa field near the foothills of the Blue Ridge Mountains during a violent thunderstorm as he was returning to Minnesota from the nation’s Capital for the Labor Day recess.

Like the charter airplane accident that killed DFL Sen. Wellstone, his wife and daughter and four others near Eveleth, Minn., Oct. 25, 2002, the accident that took the life of the 62-year-old Lundeen changed the course of Minnesota — and perhaps even American — political history.

But unlike the Wellstone tragedy, the cause of the crash that killed the first-term Farmer-Labor senator remains shrouded in mystery nearly three quarters of a century later. In fact, the FBI has never officially closed the books on its investigation into the possibility that sabotage might have caused what was then the nation’s worst aviation disaster.

The reason is that Lundeen, an isolationist who had, as a member of the U.S. House 23 years earlier, voted against the declaration of war against Germany, was accused of being a Nazi sympathizer who was reportedly under investigation by the FBI. The fact that were two FBI agents on the plane with him when it hit the ground full speed at 300 mph gave some credence to the reports.

(Equally ironic is the fact that Rep. Larry McDonald, the Georgia Democrat who headed the anti-communist John Birch Society, was killed on Sept. 1, 1983, along with 268 others when their Korean Air jetliner was shot down by Soviet interceptors after it strayed into Soviet air space enroute to Seoul from Alaska.  The Rev. Jerry Falwell and other conservative leaders charged the Soviets shot down the plane in order to kill McDonald.)

The sensational charges against Lundeen, which were never proven — or disproven — were first raised by muckracking syndicated columnists Drew Pearson and Robert Allen, who reported two weeks later that the “rabid pro-German isolationist was under investigation at the time of his death.”

According to the columnists, “Suspicion had been directed in Senator Lundeen’s direction after many mysterious visits to his office on the part of George Sylvester Viereck, famous German propagandist and … a self-avowed ‘friend of Adolph Hitler’s Germany.'”

They added that Viereck frequently came to Lundeen’s office to inquire if certain speeches “which had a pro-dictatorship slant” had been inserted in the Congressional Record by Lundeen and his staff.  They asserted that Lundeen’s speeches were “bitterly anti-British and vigorously against American preparedness.”

“Whether certain foreign agents figured that they were about to be exposed, whether  G-men on the plane tangled with Lundeen on the flight, or whether it was an act of God and the weather may never be known,” they declared.

Senate probe
The sensational charges prompted the Senate to order an investigation into the crash a month later, even though FBI director J. Edgar Hoover denied that the two agents killed in the crash had Lundeen under surveillance, and a coroner’s inquest in the county where the crash occurred  concluded it was the result of a violent thunderstorm, a possible lightning strike on the plane, and possibly pilot error.

However, the Civil Aeronautics Board, created only a year earlier after Sen. Bronson Cutting of New Mexico was killed in a plane crash — ironically, Lundeen pushed for the legislation that created it — raised further doubts in November when it issued an 87-page report of its investigation into the accident, even while concluding that the accident probably was caused by an “extraordinary lightning effect.”

The report noted “the fact that all-metal airplanes are frequently struck by lightning with no injurious results, and that the character of the lightning discharge, as well as its effect on the airplane and crew, in the present instance must be regarded as an extremely unusual occurrence.” It added, “Nothing within the ordinary range of experience and no combination of events of which the occurrence could be regarded as at all likely, would have sufficed to have produced this accident.”

Whatever the actual cause of the accident, Lundeen’s death had far-reaching political repercussions, just as Wellstone’s death did when Republican Norm Coleman defeated former Vice President Walter Mondale, who was a last-minute stand-in for Wellstone just 12 days before the election, and led eventually to Coleman’s defeat by Democrat Al Franken last November after a marathon vote recount. (Mondale’s loss gave him the unhappy distinction as the only person ever to lose a statewide election in all 50 states, after having lost all but Minnesota to Ronald Reagan in the 1984 presidential election.)

Stassen appointment
Lundeen, a South Dakota native who served in the Army during the Spanish American War, served one term in the 65th Congress as a Republican from 1917-19, and two terms as a Farmer-Laborite in the 73rd and 74th Congresses from 1933-37 before being elected to the Senate in 1936. He was replaced by Joseph Ball, a 34-year-old St. Paul newspaper reporter appointed by Gov. Harold Stassen.

Even though Ball opposed President Franklin Roosevelt’s New Deal, unlike Lundeen, he supported FDR’s foreign policy, voting for the Lend Lease program as a way of helping Great Britain serve as “a barrier between us and whatever designs Hitler and his allies may have on this continent.”

However, Ball could not hold off Minneapolis Mayor Hubert Humphrey in 1948, and retired to live the life of a country squire in Virginia’s Blue Ridge mountains, not far from where Lundeen met his untimely death.

I visited the site of the Lundeen plane crash some 36 miles west of Washington on Aug. 25 and spoke with 82-year-old Phyllis Ridgeway, who lives on a 60-acre farm across the road from the crash site. Mrs. Ridgeway, who was born in the area and moved to the farm with her late husband in 1950, said they found evidence of the violent crash years later.

“When we plowed our garden, we found pieces of the airplane and even a human tooth,” she said.

And what did she do with the tooth, I asked.

“My son put it under his pillow,” she said.

Albert Eisele is founding editor of The Hill, a newspaper that covers Congress.

Death of senator from Minnesota still shrouded in mystery