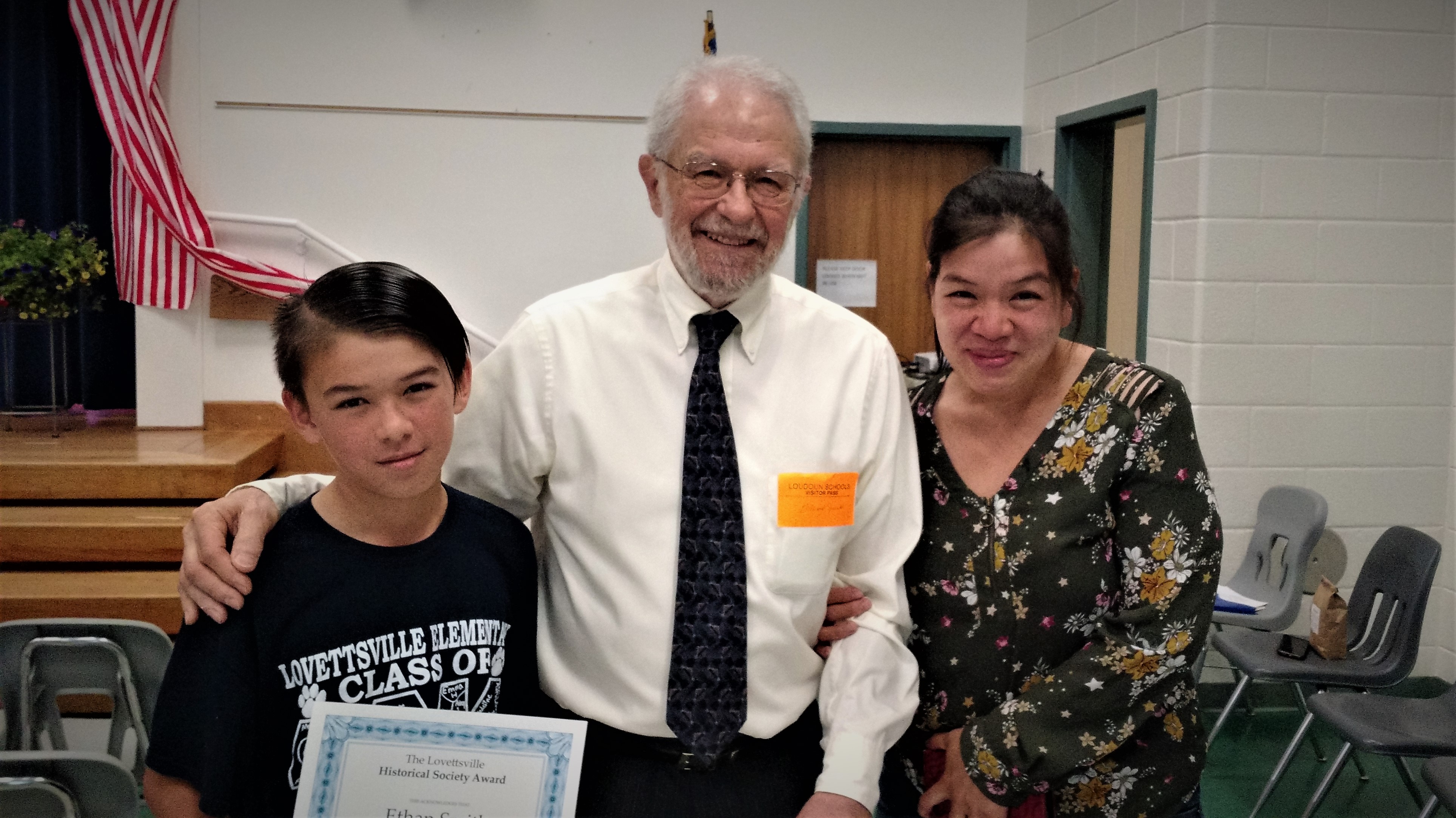 Ethan’s history essay, “Battle at the Baptist Church,” discussing the fight at the Baptist Church in Waterford between the Loudoun Rangers and White’s Commanches, in August 1862, took top honors among a dozen or so optional essays written by 5th graders.  LES Principal Linda Textoris told the Lovettsville Historical Society that Ethan’s essay “really stood out” among those submitted, and that it was the only one focused on a local event.  As Historical Society Vice-president Ed Spannaus said, in presenting the award, Ethan’s parents had arranged for him to come to the Lovettsville Museum to gather material for his essay project, and Spannaus met Ethan and his father at the Museum, and, after hearing of Ethan’s interest, was able to provide him with a number of resources on the Loudoun Rangers and the Waterford battle, which Ethan then utilized for his essay.

“Normally people study the big battles like Bull Run or Gettysburg,” Ethan wrote. “I decided to take a different approach and write about a small siege that happened locally, making it interesting to me, and a lot of fun to research.”

Battle At The Baptist Church

Since I live in Lovettsville, Virginia, I decided to do my report on a part of the Civil War that happened nearby. Normally people study the big battles like Bull Run or Gettysburg. So, I decided to take a different approach and write about a small siege that happened locally, making it very interesting to me, and a lot of fun to research. I’m talking about the battle at the Baptist Church in Waterford between the Unions Loudoun Rangers and the Confederate White’s Comanches. So, where did these Rangers come from?

On April 4th, 1861, Virginia voted 89-45 to secede from the Union, becoming part of the Confederacy. Captain Samuel C. Means, a successful businessman, owned a flour mill in Waterford and a large mercantile business in Point of Rocks, Maryland. He decided to reach out to the secretary of war after the Confederacy told him that he could either support them or leave the state and lose his property. He was famously quoted to say “No, gentlemen; you are waging a cruel and malicious war, without the slightest pretext, or excuse, upon the best government that ever existed. No, gentlemen, I will never take up arms against the United States; I will not be guilty of such disloyalty to my country.” So, on June 20, 1862 the Loudoun Rangers formed from groups of men living in the Lovettsville and Waterford area. The job of the Loudoun Rangers was to make periodic raids and capture Confederate soldiers. Some of the important battles they participated in were Fisher’s Hill, Cedar Creek, and Monocacy. The Rangers also had an arch nemesis, the 35th Battalion, Virginia Cavalry, also known as White’s Comanches. They were both founded in Loudoun County around the same time. The opposing units use to go to school together, they knew where each other lived and knew their friends and family. There were many stories of brothers fighting brothers during the Civil War, especially here in Loudoun County.

The battle at the Baptist Church in Waterford began when the Comanches were heading to Maryland. They were off to invade when they got word of an exposed Union camp. That camp was the Waterford Baptist Church and in it housed 28 Loudoun Rangers that did not know what was coming. During the Civil War it was common to have your camp in a church because there is a lot of extra space and it is only used on Sundays. So, the Rangers might of thought it was a good spot, except they were out in the open. The Comanches made their way through fields to come up unnoticed to the Virts house (the house across the street from the Rangers). Once the Comanches were set, they made a noise to get the Rangers attention. Lieut. Luther W. Slater the commander called the rangers to come outside and form a line. “Halt! Who comes there?” Lieut. Slater called out. Then, around midnight in the small town of Waterford, terror broke out.

Shots rang out as the Rangers retreated back to the church. Lieut Slater was severely wounded yet continued giving commands until he lost too much blood. The rest of the Rangers were returning fire through the windows. After about thirty minutes of intense fighting, the Comanches raised the first white flag and told the Rangers to surrender. The Rangers refused and continued to fight bravely. About one hour later the Comanches thought the Rangers have had enough and the second flag went up. Even though the ammunition was low and many were wounded the Rangers continued to fight. The Battle continued one hour longer, until about 6.30 or 7 o’clock, at which time the Comanches raised the third flag demanding the Rangers surrender. Nine soldiers were wounded, one dead, and the ammo was gone. The Rangers had no choice but to Surrender. There marked the end of a significant battle that took place just up the road from where I live.

Usually, when taken prisoner, a soldier would be taken to a prison camp and treated like a prisoner of war, but the Rangers had a lot more to be scared about. Since many of the Rangers were from Virginia, they could be considered traitors and this meant they could be executed. The Comanches were feeling nice, and instead of taking them prisoners they paroled them. To be paroled means that you have to leave the military and promise you won’t fight again. Although, many broke that promise and fought again. So, the Comanches had them line up and surrender their weapons as they counted up the Loudoun Rangers. They had a soldier go in the Church and count up the wounded that couldn’t get up. All but three people were paroled. Two of them were taken as prisoners and the other one was mistaken for a civilian because his uniform had been sent out to make smaller. So the Comanches thought he was a civilian because he was dressed in regular clothes and let him go. A very famous story occured at some point during the surrender. When they were done giving orders to the Rangers, an angry member of the White’s Comanches stepped out of line and grabbed a Ranger. He announced he wanted to kill that Ranger and the other Comanches had to interfere to stop him. The shocking fact was that ranger was his brother!

The Loudoun Rangers had one killed, one mortally wounded, and eight wounded. The defeat at the Baptist Church in Waterford would go on to be a significant part of my local Civil war history.

It still shocks me to learn that we are standing on what might have been a Civil War battlefield or a soldiers camp. I had a lot of fun researching this essay and digging deep into a little known part of history. I was informed of many things I would not have known happened after visiting the Lovettsville Historical Museum to research the Loudoun Rangers and the battle at the Baptist Church. It was very engaging to also visit the actual church and see actual bullet holes from the battle and the repairs done to the church. I look at this essay as a learning experience for me and an opportunity to remind you about the amazing history that is just outside your door.