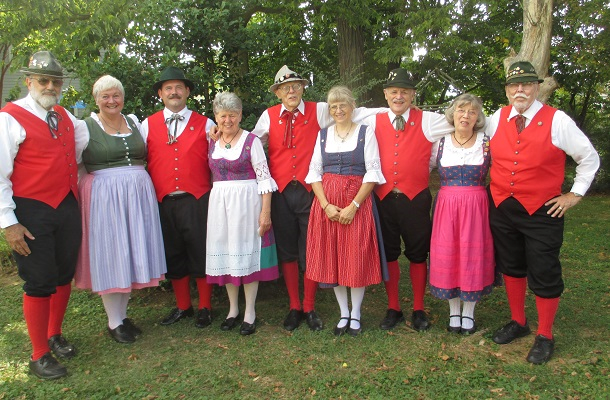 Alpine Dancers. Founder Herb Trexler is at center, Carol Trexler is in blue apron at left.

“The most beautiful memorial that a person can receive, stands in the hearts of his fellow men.”

Lovettsville’s Oktoberfest lost one of its most enthusiastic and long-time supporters in April. Dr. Herbert Traxler, co-founder of the Alpine Dancers, died unexpectedly on April 24, 2021 while vacationing with his wife and soulmate Carol in his native Austria. Herbert and Carol Traxler have appeared at every Lovettsville Oktoberfest since 2003, performing with their Alpine Dancers at the main tent, and teaching folk dances from Austria, Germany, and Switzerland. They also were active members of the Washington Saengerbund, the German-American singing society that has served genuine German food at the Lovettsville Oktoberfest since 2003. The Alpine Dancers and Saengerbund have been essential cultural contributors in creating and restoring authentic German flavor to The German Settlement’s annual celebration of its heritage. 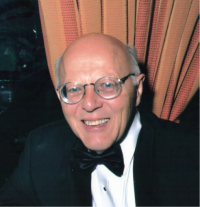 Carol and Herb were drawn together by their mutual love of music and dance. They married in 1987. This began their cultural collaboration, which has won recognition and honors not only in Washington, but also from the governments of Austria and Germany.

The Traxlers regularly gave Viennese waltz lessons at the Smithsonian, the Meridian House, the Kennedy Center, and at numerous balls in the Capital. They are renowned as Viennese waltz experts. Herb and Carol were each awarded the Decoration Merit in Gold (Goldenes Verdienstzeichen) by the Republic of Austria in recognition of their cultural efforts. Herb became President of the American-Austrian Society, and subsequently served on its board until his passing. The couple was recognized in the December 2018 edition of the Washingtonian magazine, “Meet the Septuagenarian Couple that teaches DC how to Waltz.” The Traxlers became the Austrian Embassy’s Viennese waltz teachers and also taught Chelsea Clinton and her friends at the White House. They have trained the cotillion from the Naval Academy to dance the Polonaise, Fledermaus Quadrille, and waltzes for the Christmas Ball in Washington.

The Traxlers were avid students of the folk dances of Austria, Germany, and Switzerland. They founded the Alpine Dancers, a performing and teaching folk dance group that has performed throughout the East Coast and frequently at the Austrian and German embassies. Since 2003, they performed every year at the highly-regarded Lovettsville Oktoberfest. At the Oktoberfest, Herb introduced the dances and gave a brief history of their origins and custom. Carol invited participants — , young and old — onto the dance floor of the main tent. In minutes, with accompaniment from the Alte Kameraden band, she and Herb went far beyond the “Chicken Dance” and had couples stepping and turning to the Landler, Waltzes, Dreher, Polkas, and the energetic Zillertal wedding march.

The Traxlers also formed the Alpine Singers, who sang Austrian and German folk songs throughout the area..

In their retirement, the Traxlers traveled frequently to Austria and Germany to visit family and friends, to participate in balls and folkdance festivals, and to gather folk music and dance material to use with the Alpine Dancers and Viennese waltz classes. It was on his final day on vacation in the Salzburgerland that Herbert died unexpectedly in Radstadt. He was laid to rest in the family plot in Vienna on May 21, 2021.