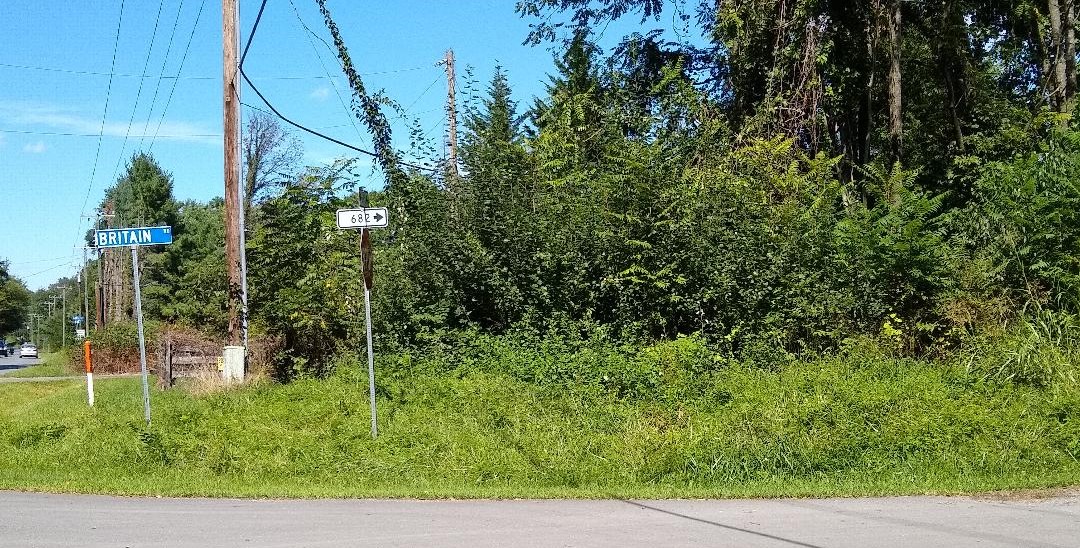 Anyone passing through the intersection of Mountain Road and Britain Road southwest of the town of Lovettsville, would have no idea that this was once the center of a vibrant Black community, centered on a general store on the west side of Mountain Road, and a thriving church and school on the east side.

Today, all that is left is an abandoned cemetery, once the burial ground for Mount Sinai Free Will Baptist Church – which includes the grave of a Civil War veteran, Private Samuel B. Timbers of the 29th U.S. Colored Infantry.

We started looking at Mount Sinai, as a result of our examination of the Register of “Colored” Voters from the 1890s which was found in the Lovettsville Museum (the subject of articles in last month’s and this month’s Newsletter). Two of those voters, J. William Paris and his son John E. Paris, are buried at Mount Sinai.

The Loudoun County Cemetery Database, maintained by the Thomas Balch Library, lists nine known burials at Mount Sinai – with the surnames of Curtis, Howard, Paris, Timbers, and Young.  We have learned of a number of other burials, with the surnames of Beaner, Furr, Hogan, Lucas, Moten, Payne, and Redman.  According to stories circulated in the area, there are many more burials there, and perhaps as many as one hundred altogether, according to one unconfirmed report.

Even the go-to website for cemeteries, Find-a-Grave, had no listing for Mount Sinai until recently, when we created one. We now show 16 known graves, and we expect to be able to add many more as we learn of them.  You can view the Mount Sinai Cemetery page here.

Although the cemetery appears neglected today – and indeed is not even visible from the road this time of year – various efforts to clean  and restore it have been undertaken from time to time, by families or the property owners. Private Timbers’s grave marker was cleaned and repaired about six years ago by Kenneth Fleming, who is well-known in this area for his care and restoration of veterans’ gravesites, including both Confederate and Union soldiers from the Civil War. 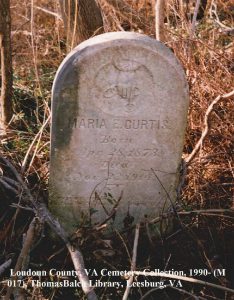 Loudoun historian Eugene Scheel describes Britain (or “Little Britain” as it is sometimes called), as lying at the “southwest corner of The German Settlement,” an area first settled by German families including as Arnold, Crim, Frye, Grubb, Householder, Jacobs, and Painter.

By the middle of the 19th century, Scheel says, the area became known as “Guinea” – a somewhat derogatory name for the Black families, both Free Blacks and former slaves, who had moved into the mountain cabins built by the early Germans.  Among these families were Curtis, Hawkins, Hogan, Lucas, Moten, Stone, and Timbers.

A general store was built by William English, probably in the early 1880s, according to Scheel. By 1891, there was a post office in the store.  William English wanted to name the post office “English,” but the Postmaster said no, that it would be confused with other similar-sounding names, so English named it “Britain,”  known locally as “Little Britain” or “Little Brittain.” In the later 1890s, the English moved the store to the intersection at Mountain Road, from its first location about an eighth of a mile east of there. From the 1930, it was known as “Arnold’s Store” for the Arnold family which operated it until its closing in 1987.

The Mount Sinai Free Will Baptist church and school

So far, we have been able to trace the history of Mount Sinai to 1883 and Franklin Pierce Lewis, who was born free in 1847. He was the youngest son of Priscilla Lewis, a Free Black who owned property in Lovettsville before the Civil War.  Franklin Lewis was educated in the public schools which were established in 1869-70, and then at Storer College.  (Storer College grew out of a school for emancipated slaves that was set up in Harpers Ferry at the end of the Civil War by missionaries and educators from Maine who were affiliated with the Free Will Baptists.  The College was in existence from 1867 to 1955, and many of the teachers in Loudoun County’s “colored” schools were trained there. For more background on Storer College, see the 2017 LHS lecture “Hope on the Hill.”)

Franklin Pierce began organizing the Mount Sinai church and school around 1883, starting with six members, and growing it to 60 members within five years.  The first pastor of Mt. Sinai, the Rev. P.W. Johnson, died after a few months, and Lewis then assumed care of the church and school. In 1885, Lewis was ordained as a minister.

By 1887, the members had built a church building which was dedicated, debt-free, on Oct. 23, 1887. Officiating at the dedication were various officials of Storer College, including its founder Professor Nathan Brackett, and of course Rev. F.P. Lewis, according to an article in the Loudoun Telephone.

Over the next three decades or so, according to historian Elaine Thompson, the church building was used as a school during the week, and a place of worship on Sundays.

The Britain Colored School was one of two schools for Blacks in the Lovettsville area, the other being located first at the intersection of South Loudoun and Locust Streets, and then at the AME Church building.  According to a school ledger for the Britain (Brittain, Briton) School from the years 1892-97, the school was described as a one-room frame structure, rented by the School District, heated by a coal stove; the only furniture or equipment owned by the school was a water bucket and a tin (cup).

The number of pupils being taught at the Britain School ranged from 17 to 41 in the years 1892 to 1897. In addition to drawing children from the Britain neighborhood, it also drew children from Morrisonville, and the Jumbo/Elvan communities. Surnames shown in the school ledger include:  Beaner, Bird, Burk, Curtis, Griggsby, Hogans, Lucas, Manley, Nelson, Paris, Parker, Parmes (?), Settles, Taylor, Thompson, Timbers, Waters, and Valentine.

As African-American families moved from the area, the school was closed, and a few year later, around 1920 or so, the congregation was disbanded.  The church building was used for various purposes after that, but by the time of World War II it was abandoned.  It stood on the property until sometime around the 1970s or 1980, when it was burned to the ground; all that is left, we’ve been told, is the foundation.

The cemetery continued in use through at least the 1930s. The dates of known burials range from 1895 (Elizabeth Howard), up to 1933 (John E. Paris) – but there are undoubtedly many more.

We have heard reports attributed to long-time residents in the area, that Hurricane Agnes (1972) caused local flooding which damaged the Mount Sinai cemetery, leaving it under a couple of inches of mud.

The cemetery today is on private property, so we discourage anyone from going onto the property to look for grave markers without making arrangement with the property owners. Under Virginia law  …

Descendants of some of those buried at Mount Sinai are developing plans for a clean-up and restoration of the cemetery, to be carried out over the next year.

If you know of any other burials in the Mount Sinai cemetery, please let us know, so we can add them to our listing.

(In our next issue, we will discuss more of the history of the Mount Sinai Free Will Baptist Church.)