“Know All Men by These Presents:” Taverns and Houses of Entertainment in Old Lovettsville

We are fortunate to have access to many restaurants, B&Bs, and pubs in Loudoun County.  Of course, they are not new things!  Ordinaries, taverns, and houses of entertainment were serving and accommodating people long before our county was established in 1757.  There are differing definitions between the three types of businesses depending on geographic location and over time.  For the purpose of this article, it is assumed that at a minimum, food and drink were served.  Some businesses might have had overnight accommodations, a stable and food for the traveler’s horse, and so on.

People who operated an ordinary in Virginia were supposed to apply for a license through their county. The earliest applications for licenses in Loudoun were filed in 1768.  The earliest for the Lovettsville area was Daniel Potterfield in 1832.  He applied for a license to keep [a house of] private entertainment in the town. We don’t know where it was located.

(All document  photos courtesy of the Clerk of Circuit Court, Historic Records Room)

Daniel Everhart purchased the hotel property in town in 1832, and he and his business partner Jacob Waters applied for a license in 1833, as shown below.  The ordinary would be at Everhart’s property.  Note the requirements to provide “good, wholesome and cleanly lodging and diet for travellers, and stablage, fodder and provender, or pasturage and provender as the season shall require, for their horses.”  Everhart would not “permit any unlawful gaming in his house, nor on the Sabbath day suffer any person to tipple and drink more than is necessary.” 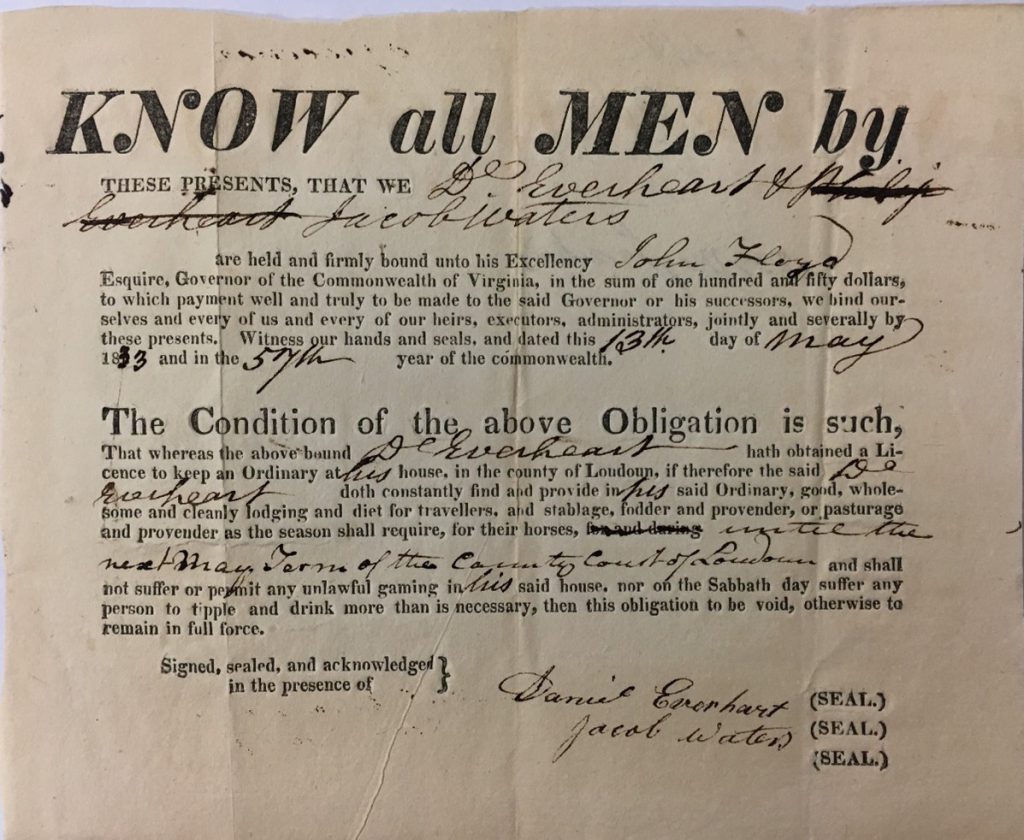 The document below shows approval of the license and Everhart’s payment.  He applied again in 1834 with partner H. Souder.

In 1847, 35-year-old John Snoots bought the hotel property from John Booth, and John Snoots and 41-year-old Jacob Snoots applied for their ordinary license.  Given the closeness of their ages, they were probably brothers. 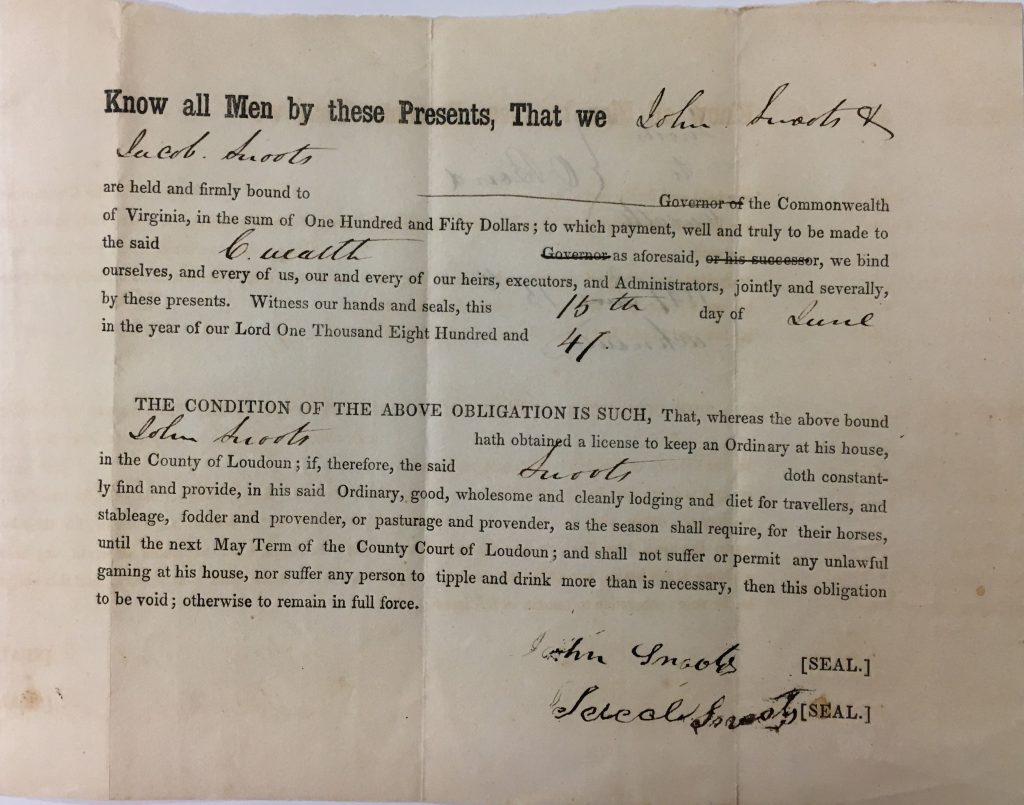 John renewed again in 1848 with partner Henry S. Williams and in 1850, 1851, and 1852.  His license application in 1854, as shown below, was for a house of Public Entertainment in the Town of Lovettsville.  Even though he no longer owned the hotel property, he may have still been managing the tavern and hotel.

There are no ordinary licenses at the courthouse for John for the rest of the 1850s, so it is not known if he continued operations without a license or the application was lost.  He was appointed postmaster in Lovettsville in 1855, and he is listed in the 1860 Federal Census as a hotel keeper in the town, so he clearly was still involved in what we call today “the hospitality business.”[1] 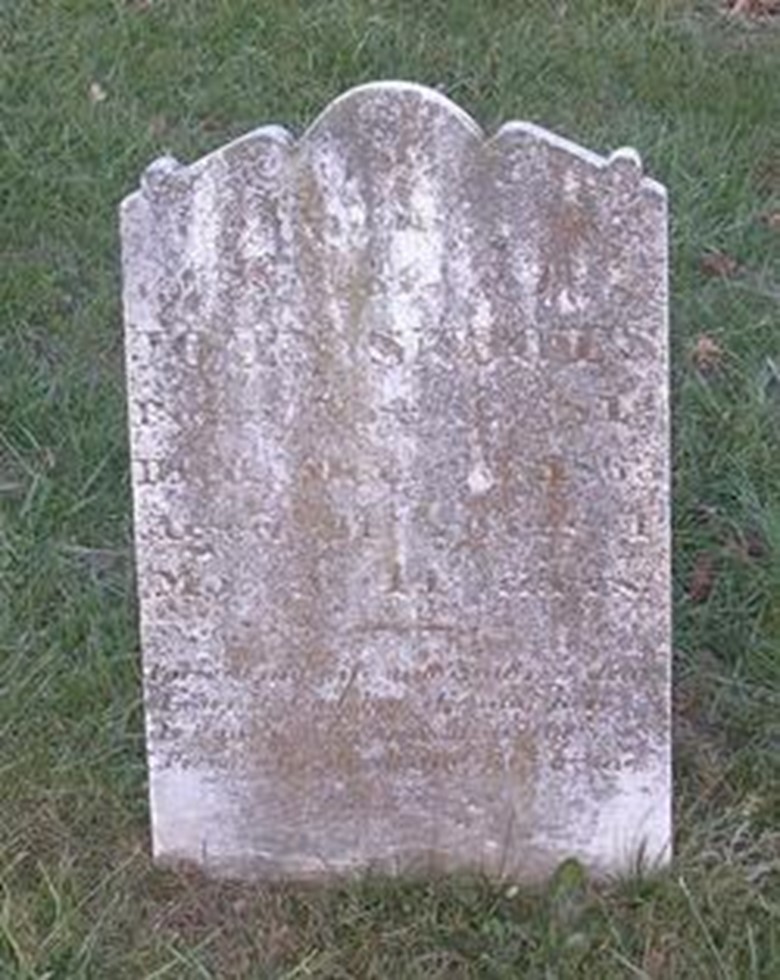 John died on 30 December 1863 and is buried in the Old Presbyterian Cemetery.  Photo from FindAGrave.com

Court was not held during the Civil War years and license applications were not processed.[ii]   Meanwhile, after court resumed, John’s widow Susan applied for a House of Private Entertainment license in 1869. 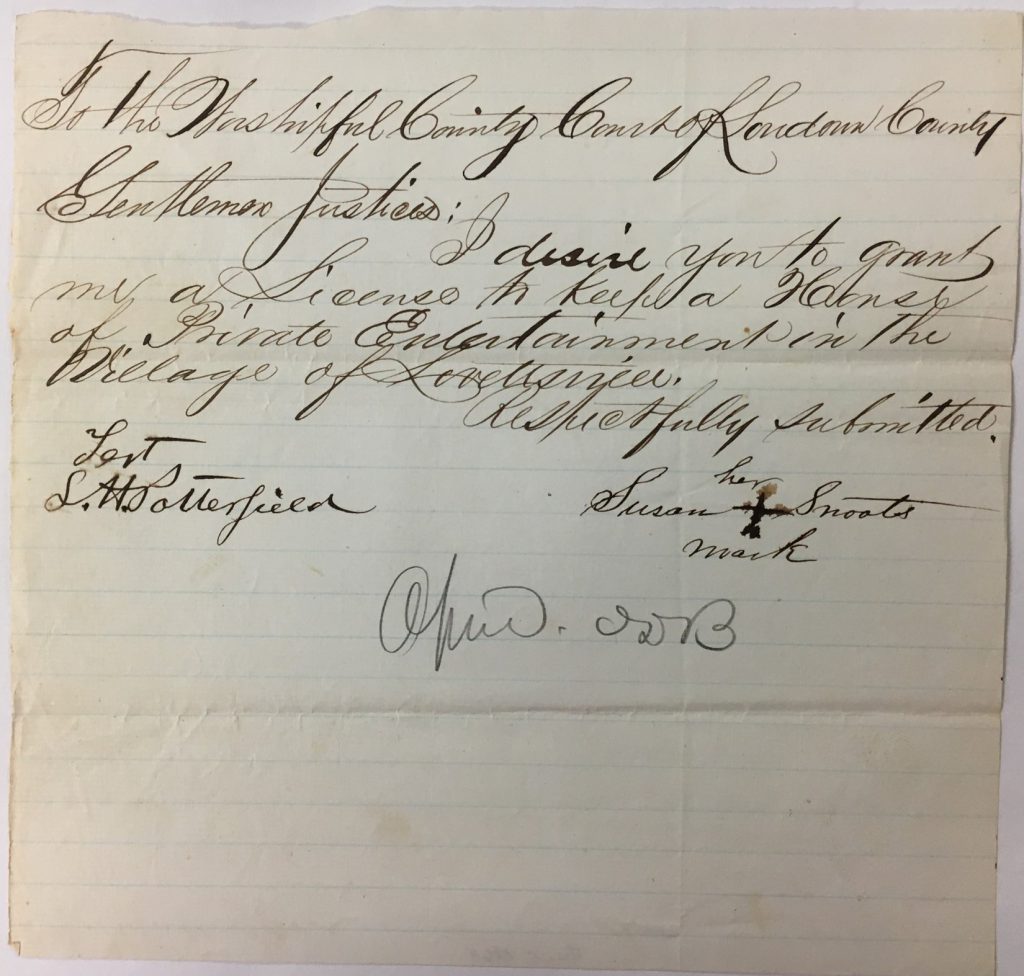 She was not listed as a tavern or hotel keeper in the federal census the following year.  She died on 27 September 1871 and is buried in the Old Presbyterian Cemetery. The hotel property appears to have remained in the Snoots family until  it was sold in 1872. 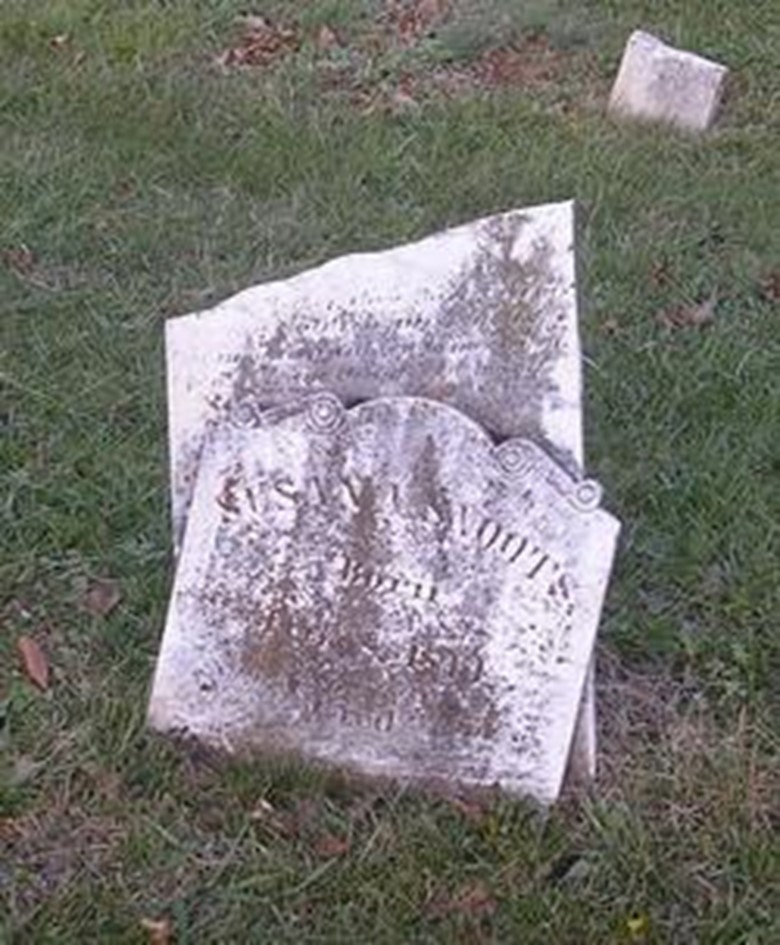 Daniel Everhart, Daniel Potterfield, and John and Susan Snoots are just a few of Lovettsville’s residents who operated a tavern or house of entertainment over the years.  Cheers to them and our present-day Lovettsvillians in the hospitality business!

[ii] John Snoots was operating a hotel in Lovettsville at the beginning of the Civil War, which was likely the hotel on the town square (today, the parking lot at the intersection of  South Loudoun Street and Broad Way). Chamberlin and Souder’s Between Reb and Yank describes Snoots as a “Lovettsville hotelkeep” who had his horse stolen by rebels.  His widow Susan later filed a claim with the Southern Claims Commission for property taken by Union troops.  Charles W. Johnson (about whom we wrote in our December 2020 issue)  and other witnesses testified that John Snoots was a loyal Union man, and that Union Gen. John W. Geary had used Snoots’s home as his headquarters. Johnson said that Snoots had kept a tavern, and that his wife Susan carried it on after John was forced into exile in Maryland.  (–ed.)

Thanks to Tom Bullock for his deed research collection, available courtesy of the Lovettsville Museum.