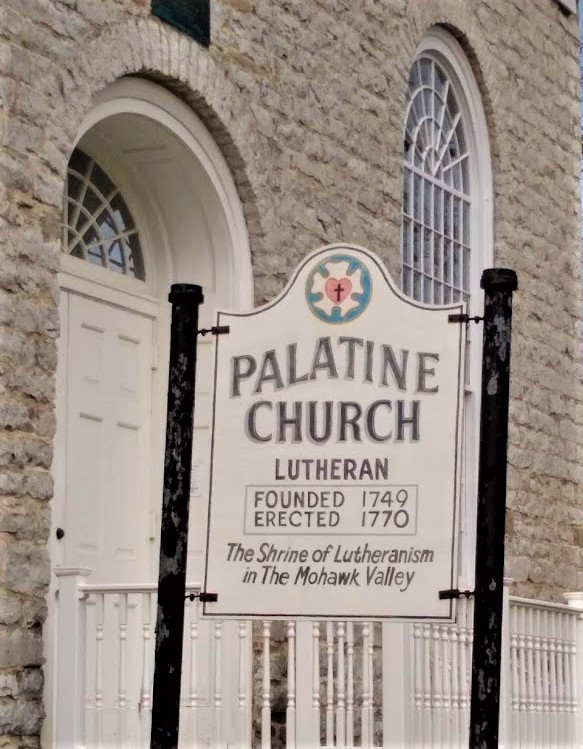 Looking for our Palatine German ancestors:

If you have visited the Lovettsville Museum, you may have seen a display called “How We Got Here: The Palatine Emigration to America, and to the German Settlement.” The display traces the early 1700s routes of travel from the German Rhineland, to the Lovettsville area, and it includes a map of the Palatine Settlements in New York State, which were located in the Hudson, Mohawk, and Schoharie Valleys.[i]

I recently had a chance to visit this area while accompanying my wife to a history event in Fort Plain, New York, in the Mohawk Valley. (Fort Plain is between “Palatine” and “Palatine Bridge” on the above map.) In just a few minutes’ drive, I came across many indications of the historic Palatine presence in this area. Not just churches and historic markers – as you will see in the pictures below – but even many local businesses have “Palatine” in their name (such as Palatine Valley Dairy, Palatine Nursing Home, Palatine Cheese Co., etc.).

Few, if any, of the Germans who established Loudoun County’s German Settlement in the early 18th century came here directly from Germany. Although it is well-known that the First Families of Lovettsville and the surrounding area came from Pennsylvania and Maryland, what is less well-known is that a number of those families first landed to the New York colony in 1709-10, and then relocated to Pennsylvania, many between 1723 and 1729.

This is reported in some histories, including James Head’s History of Loudoun County, Virginia, published in 1908,[ii] and William Eisenberg’s history of the Lutherans in Virginia. Eisenberg wrote that “Palatines from the Hudson River dispersion had moved first to Pennsylvania, and from there to this region [northwestern Loudoun County] of northern Virginia about 1732.” Eisenberg says the first settlers were predominately of the German Reformed faith, and they were later joined by Lutherans coming from Pennsylvania and Maryland.[iii]

The late pastor Michael Kretsinger of New Jerusalem Lutheran Church undertook extensive genealogical studies of the families of the German Settlement. Based on his research and his experiences with others researching their family background, he concluded that “Some of the early Lovettsville Lutherans, and, who knows, perhaps some of the earliest settlers of Lovettsville, are descendants of the early Lutheran (Palatine) settlements of New York.”[iv]

But first – how did the Palatines come to settle in upstate New York? The Rhine Valley and adjacent areas had been devastated by the Thirty Years War and those that followed it. During the severe cold of the winter of 1709-1710, over 10,000 “Palatines” refugees – they came not just from the Palatinate,[1] but also from Württemburg, Bavaria, and other areas – swarmed into London. Under the sponsorship of Queen Anne, 3000 to 4000 of them were sent to the New York colony.

Most of those who survived the grueling journal were sent up the Hudson to Livingston Manor, north of Newburgh, where they were put to work extracting pine tar for the English Navy. When the proprietors realized that they were tapping the wrong kind of pine tree, the project was terminated in 1712, and the Palatines dispersed into the Schoharie and Mohawk Valleys, with some ultimately relocating to Pennsylvania in the Tulpehocken Valley, west of Reading, whence came a number of Lovettsville families. The move to Pennsylvania was led by Johann Conrad Weiser in 1723; he was followed some years later by his son Conrad Weiser, the famous ambassador to the Indians of the Six Nations. (Conrad Weiser was the subject of an April 2014 presentation in our lecture series, given by a direct Weiser descendant.)

The Palatines in New York who moved west, beyond the Schoharie Valley, were led by a small number who settled at Stone Arabia, north of the Mohawk River, in 1712, where they began to organize a Lutheran church.

From there the German Palatines continued west to German Flats and other areas made famous in the 1939 movie Drums Along the Mohawk. Many of their descendants still live there today, and the spires of numerous churches of the Lutheran and German Reformed denominations dot the countryside and the towns of the Mohawk Valley to the present time.

Later this year, I hope to visit the Old Stone Fort Museum in Schoharie, which is now closed for the winter, in order to learn more about the Palatines in New York State.