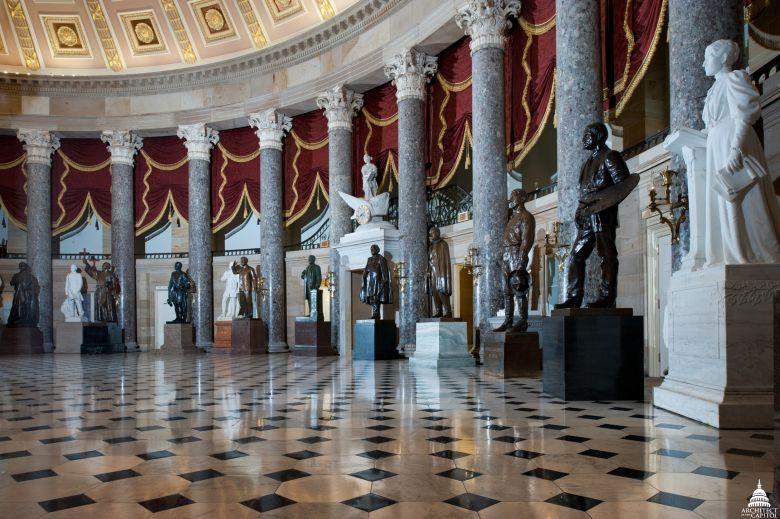 “The Lost History of Potomac Marble”

Presented by Paul Kreingold. Conservation Director of the Loudoun County Chapter
of the Izaak Walton League of America.

When the Capitol of the United States was rebuilt after the British burned Washington in 1814, the famed columns in the old House and Senate chambers were built with what is called “Potomac Marble,” found on both sides of the Potomac River — in Loudoun County in Virginia, and in Montgomery and Frederick Counties in Maryland.
On November 10, naturalist and historian Paul Kreingold will tell how he rediscovered a number of these historical quarries, in the concluding presentation in the Lovettsville Historical Society’s 2019 Lecture Series.
Kreingold will tell the fascinating story of how the destruction of Washington in 1814 by the invading British challenged President James Monroe and his administration with the task of rebuilding the edifices which had been destroyed. As did Washington and Jefferson earlier, they understood that the principal buildings of the United States government were not mere offices, but symbols of the aspirations of the Republic. These buildings had to be more than functional; they had to be beautiful. As classicists, their notions of beauty were derived from the ancient Greek and Roman Republics.
Like the Greeks and Romans, the preferred building material was marble. The question was: where was such building material to be found?
The building material which was discovered and used was Potomac Marble, which exists in abundance on both sides of the Potomac River in this area, extending on the south to Leesburg and beyond. It is not actually marble, but a limestone conglomerate. Architect of the Capitol Benjamin Latrobe and President Monroe rode all up and down Loudoun County opening up quarries, and despite many problems and political opposition, Latrobe was able to build the beautiful columns on the House and Senate sides from this marble.
In the process of his research, Kreingold has re-discovered some of the 200-year old quarries, and has polished samples from these local quarries for display.
He will also discuss:
1. The step-by-step invasion of the British from the Patuxent River to DC.
2. The methods the British used to actually burn the stone buildings; after all, how do you burn stone?
3. How stone was quarried in the early 19th century, along with sample quarry tools; and
4. The utilization of George Washington’s Potomac Canal to ship the stone to D.C. for carving.

Kreingold is a certified Virginia Master Naturalist in the Banshee Reeks Chapter of the Archeological Society of Viginia. He is also the Conservation Director of the Loudoun County Chapter of the Izaak Walton League of America. He has presented his findings to the Northern Virginia Mineral Club, and the Banshee Reeks Master Naturalists, among others.
The presentation will be held at St. James United Church of Christ, at 10 East Broad Way in Lovettsville.
The lecture is free and open to the public, but donations and are welcome to defray expenses of the program.