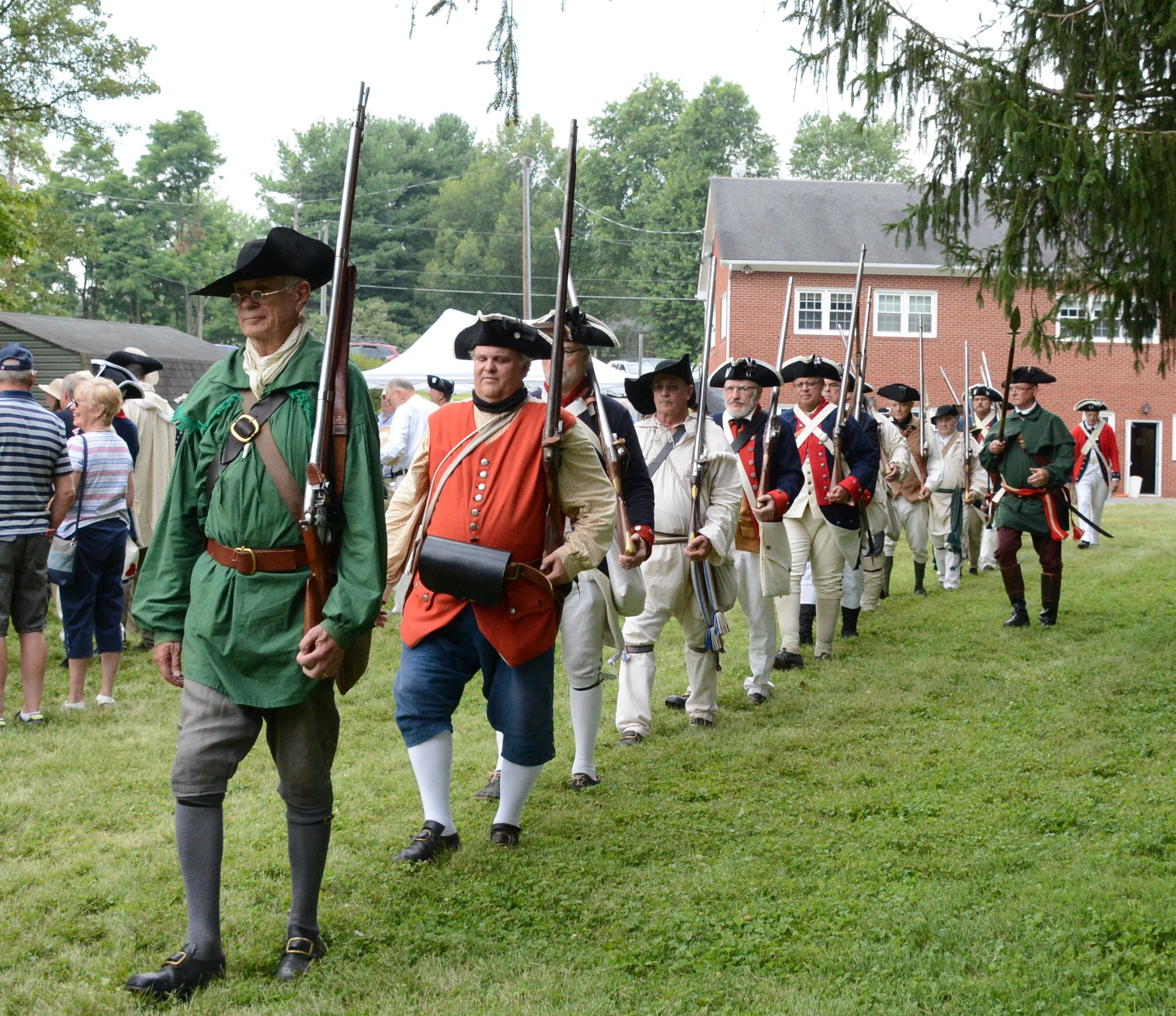 Five Revolutionary War Patriots were honored on Saturday, July 24, at an impressive and colorful ceremony held at the New Jerusalem Lutheran Church Cemetery in Lovettsville, sponsored by the Sons of the American Revolution (SAR).

The “German Settlement,” as the area around present-day Lovettsville was known, is described in local histories as “intensely loyal” to the Revolutionary cause. Historian Eugene Scheel has written:

“When the Revolutionary War broke out, there was a divided home front in the Colonies. Where the population was primarily made up of British subjects, all did not support the cause of liberty. Many Englishmen went home, thousands fled to Canada, and others like the Quakers simply withdrew as much as possible and kept quiet. In contrast, there was little division of sympathy in The German Settlement. Almost every man of military age volunteered to fight on the side of the patriots, for they remembered the reasons for their ancestors having left the Rhine River Valley.”

The New Jerusalem cemetery has the largest known concentration of Revolutionary War Patriots (at leat 15) in this area. Others are buried in the old Reformed (St. James) cemetery, and the old Presbyterian graveyard. Still others are probably buried in family burial grounds. Additionally, many Revolutionary War veterans left this area for central Pennsylvania and Ohio.

The July 24 event was one of the largest grave-marking ceremonies in this area, and an official count showed that there were 118 persons in attendance. It was co-sponsored by the Fairfax Resolves Chapter of the Virginia SAR, and the Sgt. Lawrence Everhart Chapter of the Maryland SAR.

The ceremony feaured a 26-man Color Guard, which was divided into a 12-member Flag Unit which presented and retired the colors, and a 14-member Firelock Squad which delivered a Musket Salute. The Flag Unit carried not only the American flag, but state flags of Maryland, Virginia, and West Virginia. 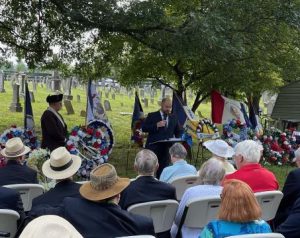 Lovettsville Mayor Nate Fontaine presented greetings on behalf of the Town of Lovettsville. In the absence of New Jerusalem’s pastor Krista Vingelis, the invocation was delivered by Pastor Roland England, the long-time pastor of St. James United Church of Christ, who is now pastor at Community Christian Church at Neersville, in the Between-the-Hills area. Other local residents in the program were Michael Zapf, who presented a history of New Jerusalem Lutheran Church; Edward Spannaus, who presented a biography of Patriot Adam Housholder; and Richard Weaver (Taylorstown), who led the SAR Recessional.

The reading of the Patriot biographies was followed by three rousing “huzzahs” – as volunteers prepared to unveil the new granite grave markers. A fourth “huzzah” signaled the unveiling. After all joined in a hearty singing of “God Bless America,” the presentation of wreaths began. Over two dozen wreaths were formally presented, from 15 SAR chapters and societies, nine DAR and two CAR chapters.

Then came the most-anticipated part of the ceremony, as the Firelock Squad moved into position, and a three-volley Musket Salute ensued. This was captured on a number of video which have been posted on the Internet, including a video posted by the Loudoun Now newspaper.

The ceremony was particularly meaningful for the Frederick MD SAR chapter, which is named the “Sgt. Lawrence Everhart Chapter” for the Revolutionary War hero who was the subject of one of our “History Mysteries.” Everhart’s entire family – his parents and his younger brothers and sisters – all came from Middletown MD to the Lovettsville area in 1787, where most of them lived and are buried. To our knowledge, all of the Lovettsville Everharts are related to Lawrence. His brother Michael, a War of I812 veteran, and many of Michael’s descendants, are buried at New Jerusalem. The road running alongside the cemetery is called “Everhart Road” for the descendants of Michael Everhart who lived and farmed across from the church property.

It is anticipated that a second grave-marking ceremony will be held at New Jerusalem next year, and other such events will follow until all our known local Revolutionary War Patriots have been recognized and honored.