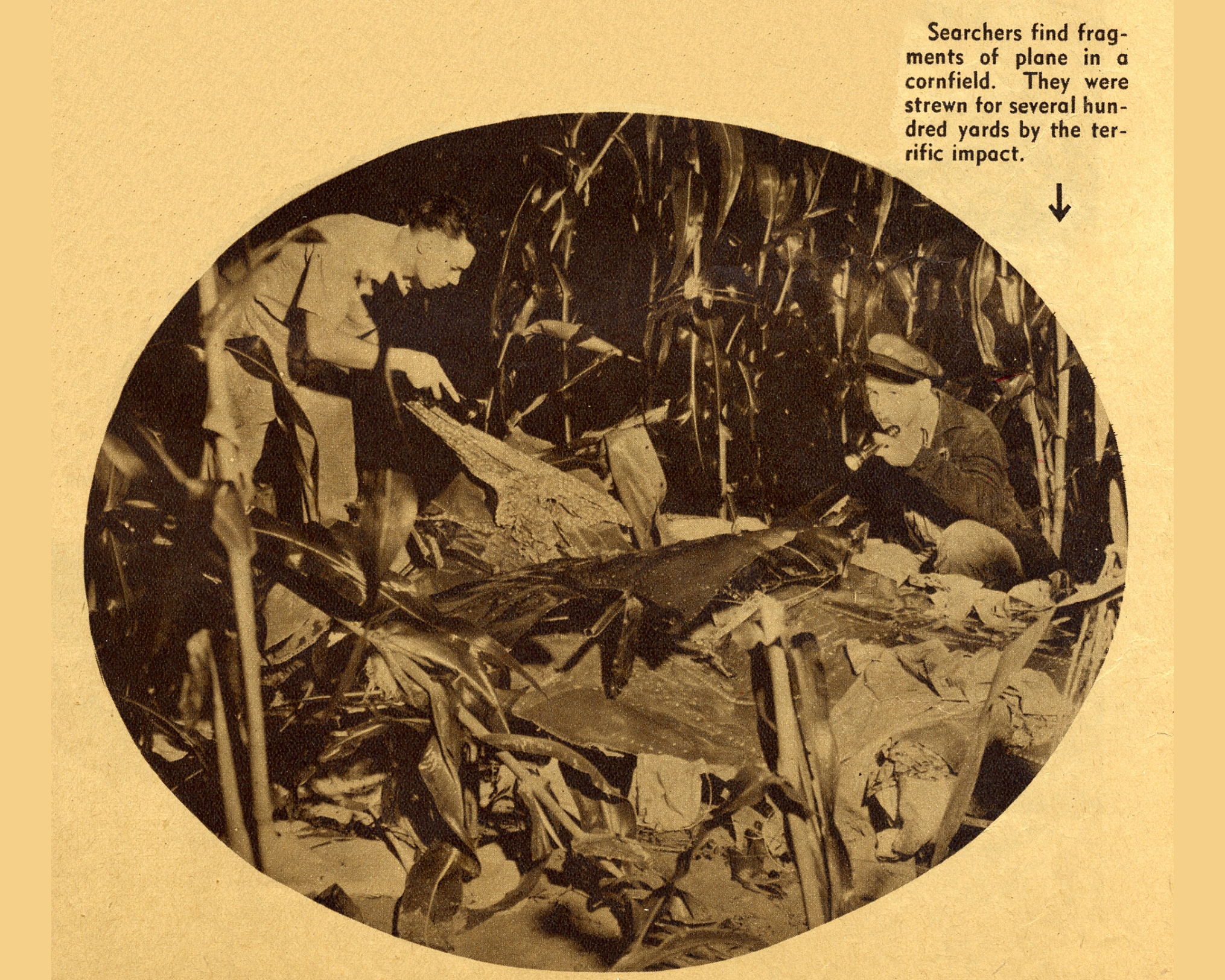 Recollections of Allan W. Brown Regarding the 1940 Lovettsville Air Disaster (2015)

Dear Mr. Flannery, I am a Brunswick Citizen reader and a former Lovettsvillian married to a Braunsweigerin.  We are now retired and in our 80s and for better or worse living in Salem, Virginia, close to our children and highly-rated retirement complexes when the time comes.

This frankly is a fan letter prompted by your plane crash article; timeliness interrupted by events and inertia and rekindled by a Christmas card from an old friend Tom Potterfield of Savannah, Georgia for whom I copied and mailed five pages of your article, but not limited thereto. All of your articles are very well written and informative and entertaining.  In fact, I put you in the same league as “MK” who wrote for the Blade-Times times back in the ’30s, ’40s and ’50s. He was Mayor Kaplan of the department store family, and he wrote news, opinion, humor, sarcasm, sports, politics, and economics with equal alacrity. I suppose he was a writers’ writer and probably never got a penny for it.

Like your eyewitness Renace Painter, I was an ear-witness to the crash.  It had rained in the Village the likes of which never…  It had stopped and my Mom and I were on our front porch for air.  Our house was near the Reformed Church. Suddenly there was around 10 seconds of roaring of engines at full throttle and then silence. Mind you we were two or 3 miles away but the World War II newsreels and Marches of Time has conditioned us to the sound we had heard.

About 15 minutes later, Lennox McKimmey (local deputy-sheriff) pulled up  to our porch and at and asked us could we direct him to the site? By that time we had heard that the crash was near “Wayne Hickman’s house” and I knew where from bicycle trips to a school friend. But I was eleven years old and could not explain the maze of “sand clay” roads to him.  Actually he perhaps “ordered” my Mom and me to get in his car and direct him through the maze.  (Actually he was married to Mom’s first cousin — her “cousin-sister” and lived on his farm “down the Point of Rocks Road.”  Thus we arrived on the site with the First Arm of the Law.
The scene was well-described to your readers from your research and your informants Renace Painter and Others. I remembered a couple of other things.  It had rained so hard that there was no blood or visceral fluids mingled with the remains. There were a number of still-laced shoes, with men’s feet still in them, snapped off at the ankle bones by the impact. Also lots of empty men’s shoes lying around with the back-center seems bursted down to the heel. But my strongest recollection is of the heavy odor which hung over the site and seems to increase near body parts. It was an unpleasant sweet/mildly acrid sent which very well might have had touches of violated corn plant and alfalfa grass in it. The odor remained either in my nasal membranes or my brain for many months.
My Father, who was a B & O Yardmaster at the time, making up trains that sent Lend-Lease materials to China and Britain to fight Fascism (!!!), was also the local co-undertaker. He and my Uncle Renice had inherited the funeral directorship from their father John D.  My Dad had studied mortuary management and embalming at Cleveland College, but World War II (even before Pearl Harbor) was taking up 12 to 15 hours of his day — six days a week. Their company couldn’t have handled it, but when he arrived home at about 7:00 PM he expressed the fear that they might yet be called upon (and an overwhelming curiosity I now believe), so he arranged with Cousin Lennox to have admission in the early Sunday hours. Mom and I accompanied him for our second look, but were restricted to the hillside behind the ropes. (There was a Washington Post, maybe one quarter page photo taken and run in the paper which showed a rather portly mother and son standing obediently).

Keep up the good work and the public service you perform!! And — The Brunswick Citizen it really is a lovable little journal. I hope it is properly appreciated.

With all best wishes,