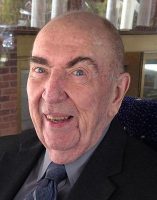 The Rev. George E. Handley, who spoke as part of the Lovettsville Historical Society’s lecture series in 2015, died on Dec. 20,2019  in Winchester.  Funeral services were held at the Village at Orchard Ridge in Winchester on Dec. 27. Handley was born April 12, 1930 in Newburgh, New York.  Biographical information can be found in the lecture announcement below,  and an obituary can be found here.

“The Big Left Turn: Germans into the Shenandoah Valley”

The German families that settled in what is now the Lovettsville area before the American Revolution, were part of a much larger movement of German “Palatine” immigrants who first arrived in the colonies of New York and Pennsylvania, then moved westward and southward into Maryland and the Valley of Virginia.

The story of this great movement along the frontier will be presented by the Rev. George Handley, one of the nation’s leading historians of the German emigration to North America and their settlements in the colonies from upstate New York to Georgia.

The first large groups of German emigrants, came to the Hudson Valley of New York and southeast Pennsylvania, as well a smaller group to Georgia, in the early 18th century. As families grew, and farm land was bought up or used up, these German pioneers moved further west. But when they got to the mountains, they took what Rev. Handley calls “the big left turn,” moving south, through Maryland and into the Shenandoah Valley.

This great movement of Germans, and also Scots-Irish, into the western frontier, was welcomed by the English settlers in Tidewater Virginia, who saw these frontier settlements as a buffer between the English settlements and the Indians. The Germans in the Valley in fact lived peacefully with the Indians until the outbreak of the French-Indian War in the 1750s, while establishing highly-productive farms and mills.

Pastor Handley is the former president of the Lutheran Archives Center in Philadelphia, and served for over two decades on the Archives Center board, and was also the archivist of the Virginia Synod of the Evangelical Lutheran Church in America (ELCA) for 12 years. He was raised in the Hudson Valley of New York, has served congregations in New York, New Jersey, Pennsylvania, Maryland, and Virginia, as well as the Virgin Islands, and has also served in administrative positions in the Lutheran Church.

Following is an outline distributed by Rev. Handley at the 2015 lecture: 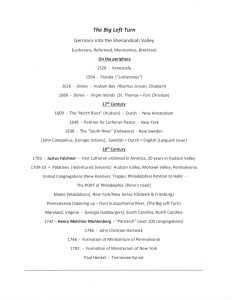