The first order of business at the Lovettsville Historical Society’s 2019 Annual Membership Meeting on Dec. 15, was the presentation of a donation to retired Marine Sergeant and Paralympic Bronze Medalist, Rob Jones, for the benefit of the Loudoun-based Coalition to Support America’s Heroes.  Since 2004, the Coalition to Salute America’s Heroes has provided disabled American veterans from Operations Iraqi Freedom, Enduring Freedom, and New Dawn with millions of dollars worth of Emergency Financial Aid and support services. 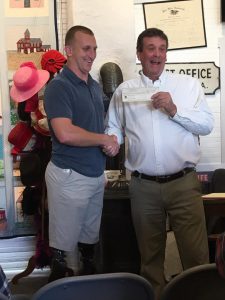 Jones is a Lovettsville native, who graduated from Loudoun Valley High School in 2003 and Virginia Tech in 2007.  During his junior year at VT, he enlisted in the Marine Corps Reserve as a combat engineer, and upon graduation he was deployed to Iraq, and two years later to Afghanistan. While leading a patrol in Afghanistan, he stepped on an improvised explosive device and lost the lower part of both his legs.

As he tells it, after the initial phases of his recovery, he went into rehabilitation at Walter Reed Army Medical Center where he was fitted with prosthetics, and  learned how to walk with two bionic knees — and eventually to run, row, and bicycle.  Rob and his wife Pam now live on a farm near Middleburg.

As shown above, LHS President Fred George presented Jones with a check for $1000 for the Coalition to Support America’s Heroes.  The funds were derived from monies left over when the Lovettsville Veterans Memorial Foundation dissolved in 2010, and donated its remaining assets to the LHS. In 2011, some of those funds were used to move the veterans’ monument from in front of the Town Hall, to the Town Square.  Last October, the LHS Board decided to donate the rest of the funds to project of Rob Jones’ choosing, believing that the funds would be best spent to support and restore our heritage of living veterans. 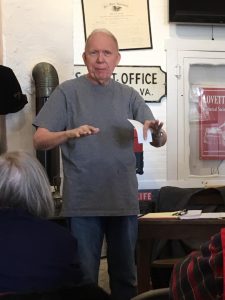 Later in the meeting, Dr. Donald Cooper ( pictured at left) presented a check for $8000  to the Historical Society, as the balance of a $10,000 matching grant Dr. Cooper had pledged as part of the Society’s fundraising for its Museum Expansion Fund. With Dr. Cooper’s generous grant, the Expansion Fund is close to the $80,000 level.  The funds will be used either for acquisition of a new Museum building, or an expansion of the existing building, when the opportunity presents itself.

The meeting concluded with the election of the Board of Directors for 2020.  The members of the new Board for next are:  Judy Fox, Bruce Funk, Fred Lee George III, Richard Gillespie, Bart Hodgson, Sam Kroiz, Edward Spannaus, Eugene Theroux, Elaine Walker, and Michael Zapf. 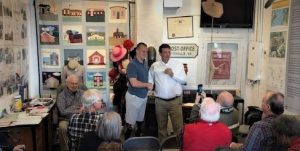