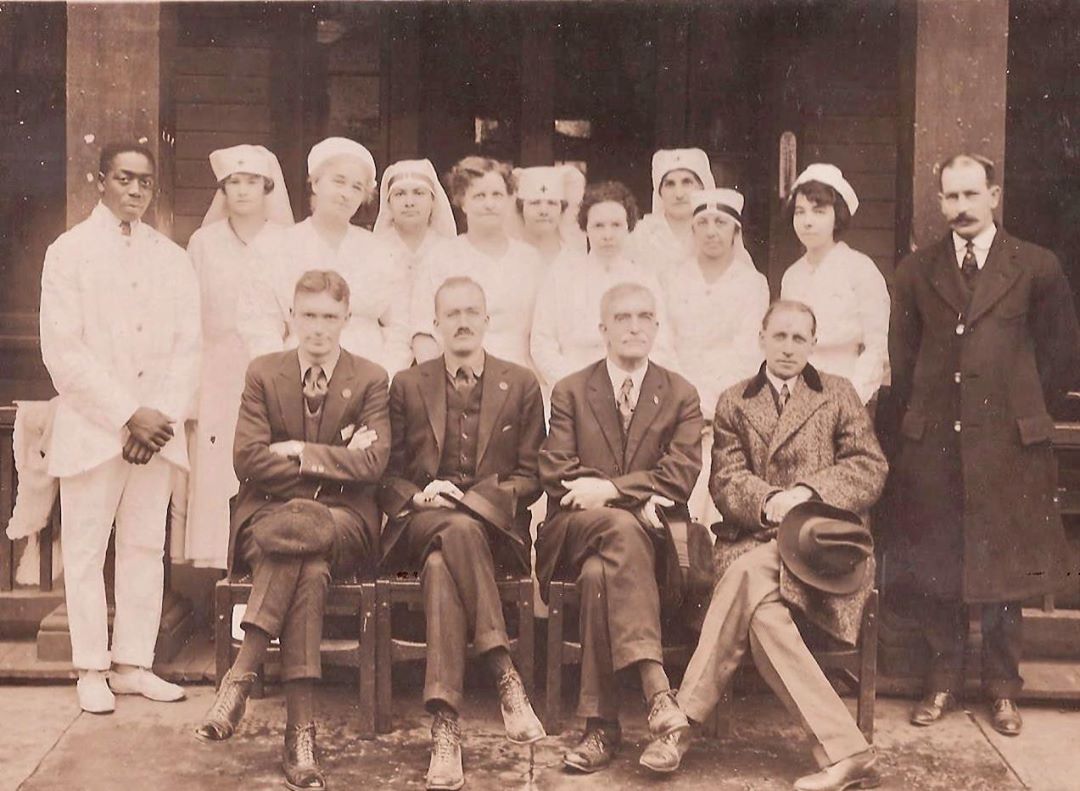 The Spanish Flu hit the United States in three waves in 1918-19. The first, which was for the most part mild and non-fatal, broke out in March 1918, in Kansas, mostly among young men in the military. Over the next six months, it spread across the country, mostly to military bases, and was carried on troop ships to France. By July, people were declaring that it was over.

The second wave, in which the virus mutated into a much more deadly form, started in September 1918 at Camp Devens in Massachusetts, and quickly spread to other military bases, and then into the civilian population. In Boston the hospitals were overflowing by early September; authorities closed schools, saloons, and theatres. This wave killed almost 200,000 Americans, and continued through December 1918.

The third wave is generally thought to have broken out in January 1919, and dissipated over the Spring and Summer, although some sources think it lingered on until the end of the year.

The first wave probably arrived in Frederick County in the Spring on 1918 from Camp Meade (now Fort Meade). At that time no one knew what it was; the misnomer “Spanish Flu” wasn’t even attached to it until June 1918. The second wave hit Frederick County during the last week of September 1918, and October 1918 was the worst month for the County. Brunswick was a “hot spot” because of the railroad bringing passengers from other parts of the state and the country.
Frederick News-Post, October 11, 1918:

“Brunswick is hit hard by the flu. The disease has to some extent crippled the railroad service and the shortage of labor comes at a very inopportune time. It was stated last night that 400 families, about half the town’s population, had the flu. Physicians are so overworked that Red Cross members planned yesterday to assist families that are ill. Former Councilman J.W. Riley, about 40 years old, died Wednesday from a complication following the flu after a short illness. He was well-known and took an active interest in the affairs of the town. Mayor Eugene Harrison is confined to his rooms with the ailment. Herbert Cooper and six children of his family and three children of Dr. and Mrs. C. E. Foster are down with the disease.

‘It was reported last night that the disease had greatly interfered with railroad work in the shops and yards. A number of employees are sick and many have been forced to stop work to look after members of their family who are ill. In order that the men may return to work and to relieve the physicians as far as possible the local Red Cross members will assist in the work of relief.”

Here are a few other newspaper items showing more of what happened in Brunswick in October.

The B&O Emergency Hospital was pressed into service against the Spanish Flu, the News-Post reported on October 15. The hospital was originally organized to render first aid assistance to train men and yard men. Red Cross workers have c volunteered to help, caring for both railroaders and residents of the town.

Brunswick is now “the center of the epidemic,” the October 22 Cumberland Evening News reported, although conditions are improving. The B&O has come to the aid of the townspeople. The old railroad bunk house has been converted into a hospital, with about 25 patients, under charge of Drs. Lloyd and Matthews and two trained nurses from Chicago. A dining car has been put at the disposal of the nurses.

By October 30, the newspapers were reporting the situation in Brunswick and elsewhere had improved. Indeed, the worst was over, although deaths from the flu continued at a high rate through November and December, and some more occurred during the third wave of the flu in the first half of 1919.