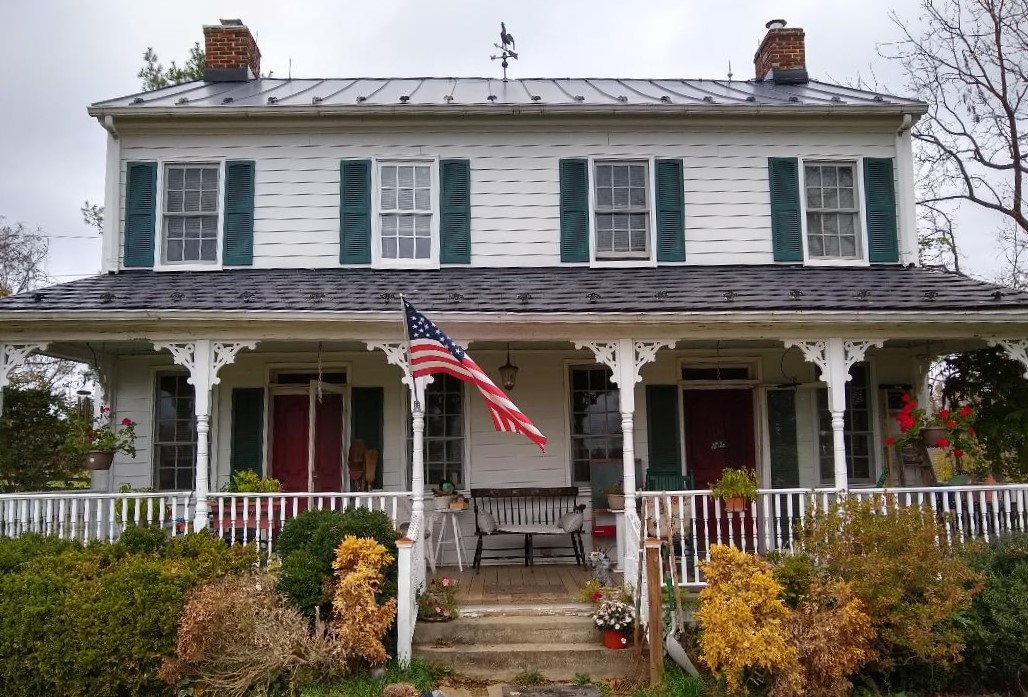 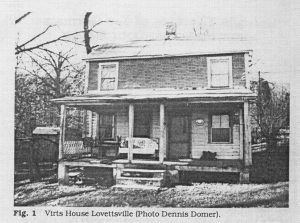 Why does that house have two front doors?

One little-known feature which gives the Lovettsville area a distinctive Germanic flavor, is the presence of a number of two-door houses – that is, two front doors – which are representative of the thousand-year old tradition of the German Two-Door House (Zweitürhaus).

In 1985-86, an architectural historian was researching German houses while doing graduate work at George Washington University.  After discovering that Lovettsville was a German-American town, the student, Dennis Domer, came out to conduct a survey to locate houses in this area with distinctive German architecture.  He was assisted in finding these houses by local residents Eliza Myers and Susanne George.

Domer’s particular interest was the Zweitürhaus, the “German Two-Door House,” which he and others have documented as going back over a thousand years in the Germanic areas of Europe. Domer located ten such houses in the Lovettsville/German Settlement area, and he went back and wrote a graduate paper which featured eight of the Lovettsville-area homes he had found.[i] He identified these houses by the name of the family which owned the house at that time.

Just recently, a visiting relative asked me:  “Why does your house have two-front doors?”  He could see that the house is not a duplex, and therefore the two front doors caught his attention.  In driving around this area – in Frederick, Maryland, for example – one will see many residential buildings with two doors in front, but these are duplexes, with two separate dwelling units.

The distinctive German-American two-door house is a one-family dwelling, a symmetrical building with two rooms in front, and usually a front porch, and two sleeping rooms upstairs. (Architects call the design a “double-pen I-house.”) Many of those that are still found today have a kitchen attached to the rear, as well as other additions; in the “Harding house,” the kitchen is a side addition.

No matter what the various styles, the basic German two-door house has two front rooms: a formal parlor on one side (the “gute Stube”), and an informal family living space on the other.  The “gute Stube” was used to receive guests, or for formal occasions such as weddings and funerals; the other room was used for everyday living and eating.

Domer says that many of these houses can be found in Pennsylvania, dating from the first period of German settlement there, and there is still a high concentration  in the Lancaster area. As these German-Americans moved south into Maryland and Virginia, they built these types of houses there, and so they are frequently found in western Maryland and what he calls “northern Virginia,” by which he means Loudoun County.

The 19th century wave of German immigrants who settled in the Midwest also built the two-door house, and Domer cites examples in Kansas, Missouri, Texas, and other states.

He traces the two-door house back to the combined dwelling house and animal stall—sometimes called a “housebarn”  or Wohnstallhaus — which existed in every Germanic area of Europe in the first millennium.  At first there were separate entrances to the animal stalls and the dwelling portion of these large houses.  Many variations of this house-barn structure developed over the centuries, and they often displayed lavish decoration and superb workmanship.  They were found in urban as well as rural areas. Over time, barns for animals were separated from the dwellings for humans, and in America, German immigrants seldom had barns and dwelling houses combined; yet they retained the two-front-door style.

The first example that Domer provides from the Lovettsville area is the “Wenner house” on East Pennsylvania Avenue (now hosting the Back Street Brews coffee shop and the Painted Pig gift shop). He describes his visit to this house, then owned by “Skeeter” and Ruth Wenner:

When I approached the Wenner house for the first time, I knocked on the right front door. Mrs. Wenner answered by opening the left front door. After some introductions she invited me into a parlor decorated with the family pictures, souvenirs from vacations, fancy cups and saucers behind well cared for cabinets. It is a very formal, clean setting, and this parlor did not look lived in. This is Mrs. Wenner’s gute Stube that is only used to receive guests or for large formal occasions such as weddings and funerals. The gute Stube is still a tradition among older people in Germany, and many Americans have experienced the use of a good parlor in their own families….  After I became better acquainted with Mrs. Wenner, she invited me into the right parlor which is very informal. This is the TV room, the room where the invalid child sleeps, where Mr. Wenner keeps his most important treasures. 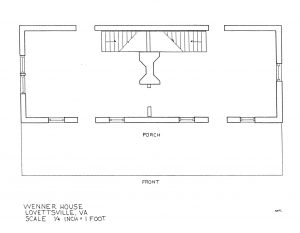 Former Mayor Elaine Walker once described hosting a group of German exchange students from Loudoun’s sister county in Germany, and how the students were spontaneously attracted to the Wenner house as representing Germanic style.

Domer also used the “Fowler house” (on Lovettsville Road, near the former community of Hoysville), as an example:

The specialness of the parlor may also be signaled by the architectural details themselves.  In the Fowler house the hearth surround in the right parlor is marbled, and the window and door trim is more ornate than in the left parlor. The outside entry to this right room is closed off as is the inside entry most of the year. 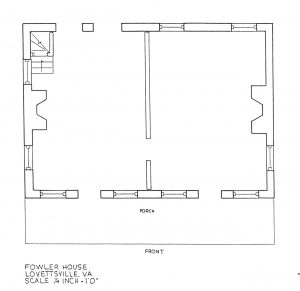 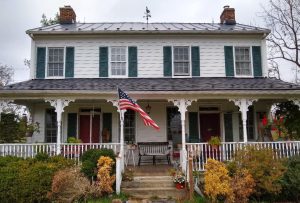 As regards building materials, Domer says that of the 20 to 25 two-door houses he has studied in various parts of the United States, most are frame or log houses (and the log houses are all in Virginia).  Only three were built of stone – one of these being the “Smothers house” in Knoxville, Maryland, just across the Potomac from Lovettsville.  Only one of these was all brick:  the “Bailey house” on East Broad Way.

The significance of the Zweitürhaus

Domer points out that the German Zweitürhaus was built by a wide variety of Germans who emigrated from different parts of Germany and settled in different parts of the United States. “The two-door house was so familiar to these Germans that they could adapt it to almost any environment without great difficulty,” he wrote.

“German-Americans obviously cherished this house,” Domer wrote, “for they built it from the 18th century well into the 20th century.”  He identified its importance as follows:

For them, the Wohnstallhaus was symbolic of success in Germany, and as a landless people with very little individual freedom, they aspired to this housebarn for generations.  For them the Zweitürhaus, a child of the Wohnstallhaus, represented the success in America attained by new middle class citizens in a promising land where there was great individual freedom.  The house represented opportunities achieved that were never possible for them in Germany.

Many explanations have been offered for the development of the Zweitürhaus in America, but Domer – not surprisingly — offers his own:

My explanation of the two-doors is historical. It was a well-known pattern in Germany, and one that many Germans adapted for American environments when they had the resources to build a house. They could have picked a one-door house, and that would have been understandable. Instead they picked a two-door model that they remembered in Germany and saw among their German compatriots….

Domer notes that this distinctive style is now disappearing:

None of the current occupants would build this two-door house type today, and this is strong evidence for the discontinuance of the Zweitürhaus as a viable house in the future.  It will probably never be built again in America, and in this sense it will join many other extinct folk houses on our American landscape.

[i] Domer’s graduate paper, a copy of which is in the library of the Lovettsville Museum, is entitled The German-American Zweitürhaus. It was later expanded into an article in a scholarly journal. See Domer, Dennis,  “Genesis Theories of the German-American Two-Door House,” Material Culture, Vol. 26 (1994), No. 1.

–Written by Edward Spannaus, with help from Dennis Domer, and from the late Dot Rickard who helped me identify the locations of a number of these houses; and also Ingrid Fowler, Gene Theroux,  John Rickard, Carl Horton, Maureen Morris, Denise Berg, and Judy Fox.