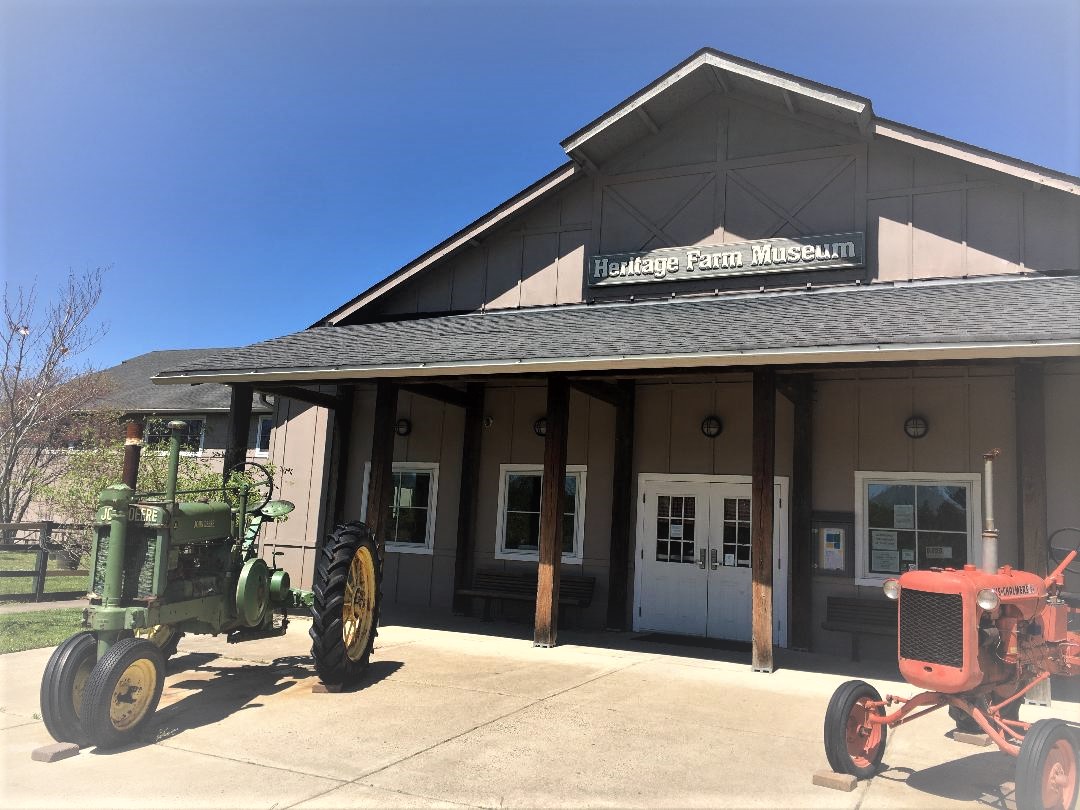 It was not that long ago when Loudoun County was primarily farmland, but land use began to change in the 1960s with the opening of Dulles Airport, and the formation of planned residential communities.  By the mid-1990s, a group of citizens was concerned that knowledge of Loudoun’s rich farming history would be lost, and they worked with the Board of Supervisors to establish the Loudoun Heritage Farm Museum within the 350-acre Claude Moore Park in Sterling.  The county had purchased the land in 1990 to save it from development and to create a much-needed park in eastern Loudoun.

The Museum’s mission is to preserve, promote, and educate people about Loudoun’s rich agricultural history.  Exhibits cover all parts of the county and time periods.  Two Lovettsville area farmers – R.T. Legard and Fred George III – serve on the Museum’s Board of Directors.

One of the first projects was restoring the two barns on the property, believed to have been built in the 1940s or 1950s after Dr. Claude Moore purchased the farm.  This photo shows one of the barns prior to restoration.  Today it houses the museum’s Workhorse Collection, a unique display of horseshoes, harnesses, and equipment from when work horses, also called draft horses, were used to plow, haul, and work the land.  The Workhorse Collection is open periodically for special programs and events. 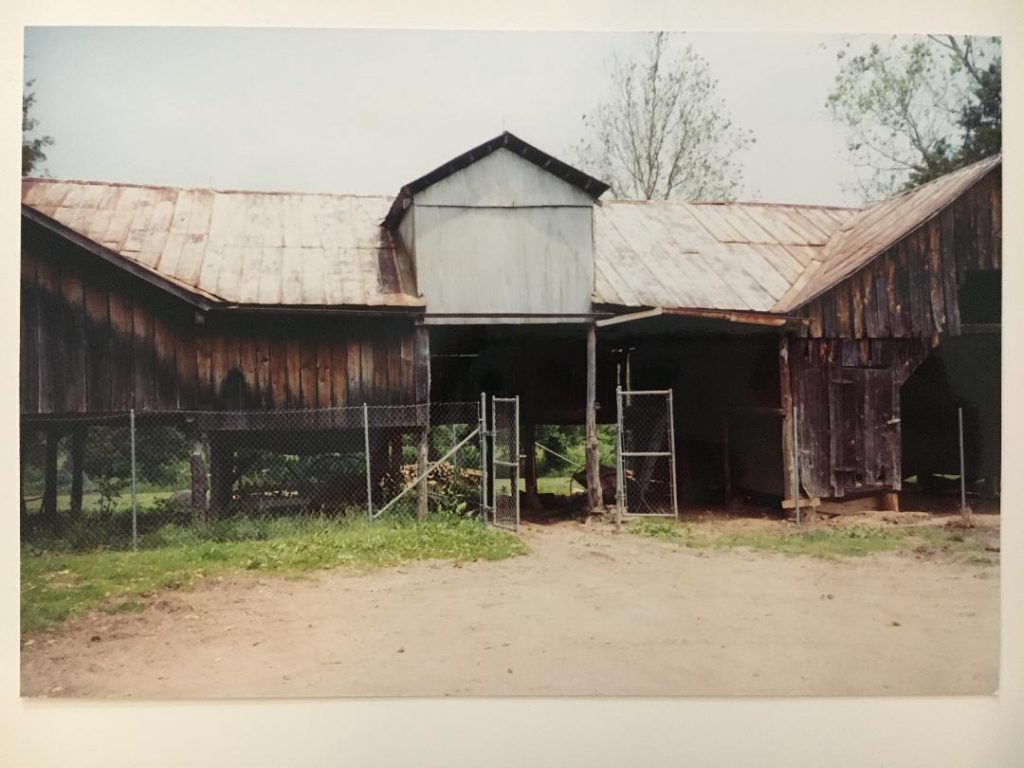 Groundbreaking for the new exhibit hall took place in 1999 and the Loudoun Heritage Farm Museum opened in 2003.  Members of the farming community donated equipment for the exhibits and shared their knowledge of Loudoun’s farming history to tell the stories.  The core of the Museum’s interpretation is called “The Country People,” which covers farming from the late 1700s through the present day, and includes topics about slavery, the German influence in northern Loudoun, dairy farming, and the transition from plows to tractors.  A colorful 300-foot long mural about agriculture is painted on the wall around the gallery. 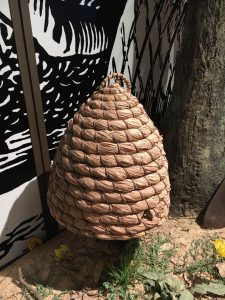 One of the exhibits is about bee keeping and features Lovettsville’s own George Wenner, possibly a son of Elder Wilhelm Wenner who came to the German Settlement in the early 1700s.  George was born in 1726.  Like other children, George had many chores on the farm – cutting weed around crops; hauling water from a nearby stream; and gathering, sawing, and stacking firewood.

George was responsible for keeping the family’s two bee skeps.  One was for pollinating the fruit trees and the other for stealing honey.  As is done today, George used smoke to quiet the bees, while snatching honey from their combs.

This straw bee skep is a manmade beehive.  Farmers set out skeps to encourage bees to live close to fruit and vegetable plants that relied on pollination. 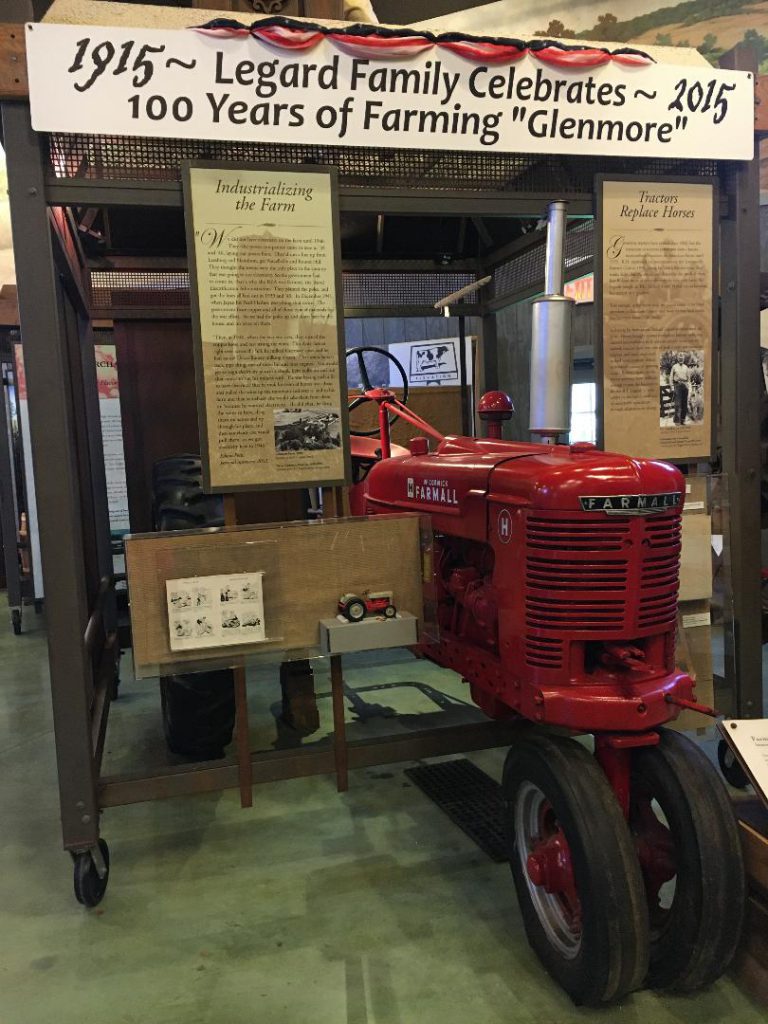 Another local family featured at the Farm Museum is the Legard family.  Glenmore Farm has been in the Legard family since the early 1900s.  At the time, workhorses provided the power for plowing and hauling.  Although gasoline tractors had existed since 1892, the transition to tractor power was slow.  Horses outnumbered tractors on American farms until 1955.  Robert N. Legard expressed his reservations to the Lovettsville Farmers Club in 1938, saying he “didn’t like the noise they made, didn’t like the smoke, and didn’t like the smell of them.”  But his son Roland must have felt differently, because two years later the Legards purchased an THC Farmall Model H that ran on kerosene but started with gasoline.

By buying their first tractor, Roland industrialized the farm.  Horses brought animal strength to human tasks, but tractors accomplished work that animals simply could not do.  Glenmore passed to R.T. Legard, Jr. who carries on the family tradition of farming.  The Legard family donated to the Farm Museum the Farmall tractor shown in this photo, as well as other farming equipment.  R.T. Legard has a collection of antique tractors and farm machinery, and was featured in a video about Loudoun’s farmers.   It can be viewed here: https://www.youtube.com/watch?v=oE-NJg4mVyw 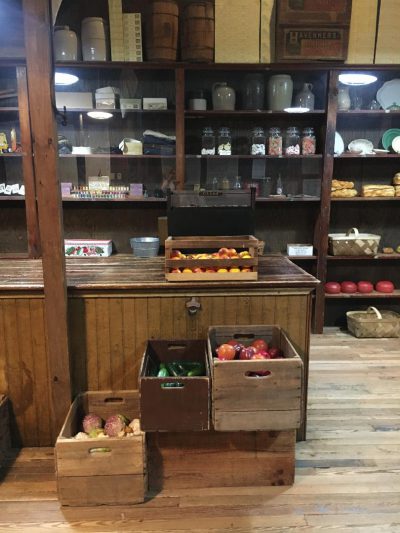 The largest exhibit at the museum is the Waxpool General Store.  Most of the contents and parts of the store’s façade came from the original store that once was located at the intersection of Belmont Ridge Road and Waxpool Road in Ashburn.  Built around 1898, the Munday and Tillett families owned and operated it until 1943, when it was closed and boarded up.  During its heyday, the store also served as a post office and voting precinct, and was a gathering place for the community to catch up on news and stories of the day.

Before the store was demolished, the Tillett family donated the store’s contents, 35 ledger books, and numerous invoices and correspondence to the Heritage Farm Museum.  Once an important spot in the Ashburn community, it is now integral to telling the story of farm life in Loudoun County a century ago.

New exhibits in the form of interpretive panels and small displays are frequently added.  Most recently the Museum has focused on farming in the Sterling area and on Black farmers in particular.  A little-known story is that of the Edds, Fitts, and Ewing families who owned large dairy farms on the north side of Route 7.  Today those farms are the planned communities of Countryside and Cascades, but in the early to mid-1900s, they were thriving dairy farms.  William and Flora Edds (pronounced Eads) owned approximately 270 acres and called their farm Pidgeon Hill.  They transported their milk and the milk of nearby farmers into Georgetown for processing.  More information about the Edds family and Pidgeon Hill Farm can be found on the Museum’s blog at https://heritagefarmmuseum.org/blog.

We hope you will visit us soon!  During Phase 3 reopening guidelines, the Loudoun Heritage Farm Museum is open by appointment Tuesday through Sunday for hour long educational programs and periodic outdoor programs.  Information can be found on the museum’s web site https://heritagefarmmuseum.org/, Facebook, and Instagram.  Questions can be directed to Lori Kimball at hfm.executivedirector@gmail.com.