Here’s a story you may have missed, in the absence of the Brunswick Citizen and its news coverage of “Greater Lovettsville”. We learned about this incident from the Hagerstown news source WDVM, which published out a story and a video which you can find here.

Dr. Wayne Allgaier has been one of the volunteers leading the beautiful restoration of the Old Berlin Cemetery in Brunswick, also sometimes called the Old Lutheran Cemetery.  On October 6, he was walking in the cemetery when he came across a group of young school girls who were using the cemetery as a quiet reading place in between virtual classes. 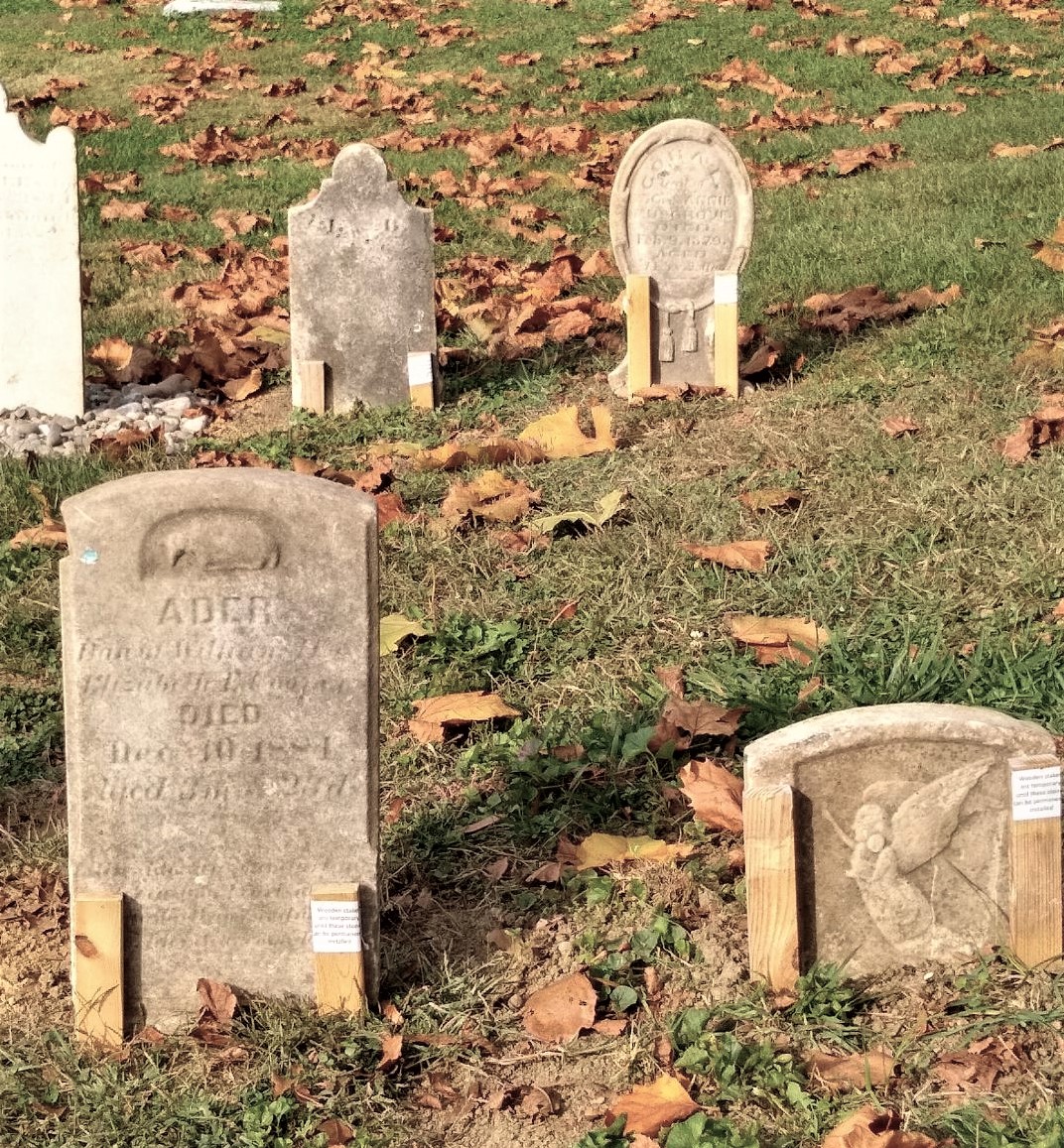 Why are these stones laying down, when the others are standing up, the girls asked, pointing to four grave markers. (See the WDVM video link above.)  Dr. Allgaier thought to himself that these markers didn’t look familiar, and he soon realized that he had never seen these markers before.  Up to this point, there were 71 identified headstones or monuments in the cemetery; about a third of these had been just recently identified and restored.

The four mysterious markers were near the “orphans memorial” – a group of markers or parts of markers whose original locations could not be determined.

Dr. Allgaier told the Lovettsville Historical Society that he has been able to identify the names on two of the four suddenly-appearing markers – Cora Musgrove (rear right in photo) and Ader Cooper (front left) – who have siblings buried there.  (Cooper is of course a common name around Lovettsville, and Dr. Allgaier notes that the Coopers and many other Brunswick families came across the river from Lovettsville.)

The third of the four mysterious markers (rear left) has the initials “J.B.”  There are two known burials with those initials, Allgaier said. (The death dates for these are 1845 and 1895.) The fourth is only the top part of a marker, and has a carving of an angel.  All four markers are believed to have been for children buried in the cemetery. They have now been temporarily added to the “orphans memorial.”  (In the photo below, the newly-found markers are at the right end of each row, propped up with temporary wooden stakes.)

Neither Dr. Allgaier, nor Town of Brunswick officials, have any idea how the gravestones got back to the cemetery, but everyone is grateful that they are back, and they hope that whoever left them there over the night of October 5-6 will come forward.  This might help to track down other markers which have gone missing over the years.

There are 149 documented burials in the cemetery, and likely many more undocumented. Most burials took place in the late 19th and early 20th centuries, but there is one dated 1810, and another reported stone from 1806. In 1799 the property was sold, and already at that time a burial ground was included. The land was later owned by Lovettsville-born Joseph Waltman (1800-1870), and his will specified that the land “now used as a graveyard” be held in trust for the Lutheran church being formed in Berlin (now Brunswick). Waltman himself and his family are buried in the Old Lutheran Cemetery in Lovettsville.

Many gravestones have also disappeared from Lovettsville cemeteries and burial grounds over the years, and some are thought to have been used as paving stones on private property.  The Lovettsville Historical Society notes that it has learned of a couple of markers in yards or garages in recent years, and we believe there are many more out there.

Anyone with knowledge of lost gravestones should contact Dr. Wayne Allgaier, wallgaier@me.com, for Brunswick; or the Lovettsville Historical Society, info@LovettsvilleHistoricalSociety.org, for Lovettsville.