In our last issue, we reported on the history of the Ruse-Reed homestead on the Lovettsville Community Park site, and how the County was planning on demolishing the old farmhouse. That has now happened, more quickly than expected.

At the end of January, while the demolition contractor was attempting to remove the roof, the entire farmhouse collapsed inward on itself. (See photo at end of story.)

The collapse was the product of years of neglect by the County. After the park property was acquired through a joint effort of the County and the Town, led by then-Mayor Elaine Walker, plans were made to save the farmstead buildings and create an interpretive exhibit about farming in the 19th century German Settlement. However, due to lack of funding and lack of interest on the part of many in the County Government, the farmhouse and other buildings were allowed to be damaged by vandalism and water damage. 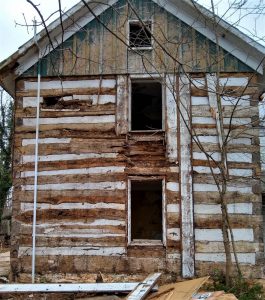 Recently, as development of other parts of the Park proceeded, and demolition of the deteriorated farmhouse was scheduled, the County was subjected to renewed calls for preserving what was still left of the farmhouse and various farm buildings. This intensified after the demolition contractor removed the board-and-batten siding on January 6, which exposed the two-story log house underneath. 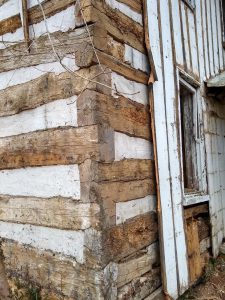 When the county archeologist and preservation officials (along with a Lovettsville Historical Society representative) went to the site that day, they discovered writing on the old log house with the name “Emanuel Ruse” and the date “1876.”  Demolition was delayed – a “stay of execution” as one County official put it – while other County officials got involved.
On January 21, Loudoun Now reported that Department of Transportation and Capital Infrastructure Communications Manager Shawn Taylor Zelman said that the County was documenting the log portion of the farmhouse and other buildings, including the summer kitchen, the meat house, the bank barn and the dairy barn. “[I]t is the intent of the County to save as much as possible to add to the interpretive area of this farmstead,” she was quoted as saying.

At the end of January, with the documentation completed by an architectural historian, a “surgical” dismantling of the farmhouse resumed. But as the roof was being removed, the structure collapsed – mostly likely due to the extensive water damage to the building. Many of the logs were saved, and will be moved to a secure location.Tentative plans, unfunded so far, are to preserve as least two outbuildings – the summer kitchen and the meat house – and the foundations of the dairy barn and the bank barn, and to develop interpretative signage which would tell the story of the farm and those who worked it.