I was staffing the Museum about a year ago – when we were still open – when a somewhat familiar-looking gentleman walked in. He introduced himself as Wayne Allgaier from the Brunswick History Commission, and I immediately recognized him, as I had met with members of the History Commission a few months earlier. 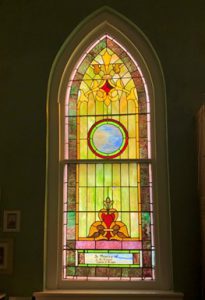 Dr. Allgaier explained that he was looking for records of the old German Reformed Church in Brunswick, whose building now hosts the Beans-in-the-Belfry coffee shop. The reason he was looking for them, was because he had been asked by the History Commission to develop some information on the names inscribed on the stained-glass windows which still adorn Beans-in-the-Belfry, even though the church is long gone. (It was opened in 1910, and closed in 1968.) He was wondering if St. James United Church of Christ (the old Lovettsville German Reformed Church), might have the Brunswick records, since the two churches always had close relations. In fact, during the 1940s, the Lovettsville and Brunswick Reformed Churches has been combined into one “charge,” or circuit.

Being familiar with the St. James records, I told Dr. Allgaier that the Brunswick records weren’t here, and we discussed where he might find them. Over the next few weeks, I made some inquiries, and got some leads in Frederick County, but we never did find the records locally. Dr. Allgaier concluded that he would have to go to the Evangelical & Reformed Historical Society in Lancaster, Pennsylvania – but by that time everything was being shut down due to the pandemic, so he never was able to find the church records.

But, adapting to the circumstances, Dr. Allgaier’s work-around was to search on-line genealogical sites such as Ancestry.com, FamilySearch.org, and Find-A-Grave – plus consulting census records and various local history resources. He was able to pull together biographical sketches of all those whose names are inscribed on the windows, which he has compiled into a paper, “The Stained Glass Windows of the German Reformed Church in Brunswick, Maryland.” That paper will soon be available at the Lovettsville Museum.

The names on the windows that he has researched include:

• Rev. Charles M. Smith, the church’s first minister.
• Edward C. Shafer, chairman of the church’s building committee, editor of Brunswick’s first newspaper (the Brunswick Herald), and mayor of Brunswick.
• Charles C. and Lydia A. Orrison. Farmed in Rocky Springs. Their son Clayton moved to Brunswick where he was a conductor on the B&O Railroad.
• C. Kieffer Orrison. Grandson of Charles and Lydia; Clayton’s oldest son. Chief clerk for the B&O Railroad. Died age 27.
• George D. and Mary E. Fahrenbach. Civil War veteran. Farmer and prominent citizen in Berks County, PA. Son-in-law William B. Werner was minister of the Brunswick Church for 6 years (1917-1923)
• Albert F. and Mary A Ramsburg. Prominent farmer in Frederick County [Ramsburg farm out across from McDonalds??]. She died in 1894, and he died in 1909, one year before the church was completed.
• John H. and Laura V. Grove. A retired merchant (dry goods and groceries) in Burkittsville, moved to Brunswick when he retired.
• Mary McDonald. Boarding house proprietor in Brunswick. Mother of Civil War veteran Rufus Brunner. In her will, she bequeathed “to the Reformed church of Brunswick, $25 for the erection of a memorial window in the church to her memory.” (There is no window today with her name on it.)

Meanwhile, a story on the names in the windows appeared recently in the January 22 issue of the Frederick News-Post, under the headline “From church to cafe, Brunswick’s Beans in the Belfry preserves history,” which you can read here.